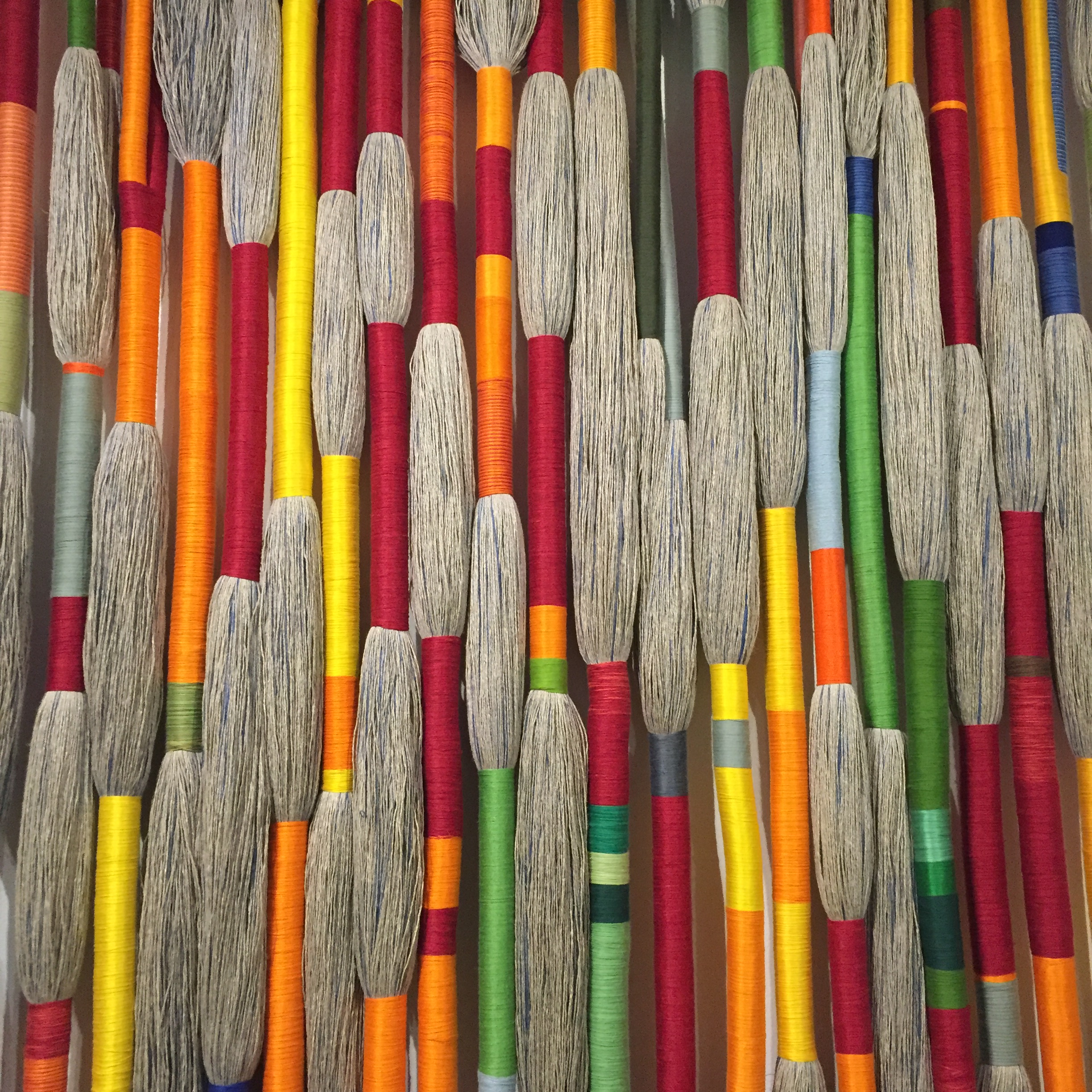 Review of Sheila Hicks: Material Voices  exhibition at the Textile Museum of Canada.

This is a stunning exhibition, which plays with the themes of memory, contrast and space. Upon entering the exhibition the visitor is struck by the circular nature of the display space, which mirrors Sheila Hicks’s own cyclical treatment of her work. A video introduces us to Hicks and her revisited embroidered installations for the Ford Foundation. Filmed interviews with her and the footage of the making and installation process reveal the painstaking planning and precision involved in the creation of these two large-scale works, which together measure over 70 x 21 feet and comprise of 1110 embroidered medallions. The film reframes how we view the relatively modest 10 wheels of golden thread which make up the Test panels for Ford Foundation Installation, 2013 (fig.2), inspiring the viewer to imagine multiples of them.

The film raises our expectations and ignites our understanding of the processes behind the works. There are over 60 works in a range of media on display in this exhibition that span 50 years of Hicks’s industrious career.

The hanging of the artworks creates a joyful juxtaposition between controlled and liberated forms, smooth and rough textures, as well as tonal and colour harmonies. The Ford Foundation installation, 2013 and Seal Beach, 2009 (fig.3) works are examples of her precise, composed and tonally restrained embroidered pieces. In contrast there is Drawing with Fibre I, 2014 (fig. 4) and Interplanetary Message Bearers, 2015-16, which are organic in form and space. Hicks also generates glorious contrasts within single works. Predestine Color Wave I, 2015 (fig.5) and Predestined Color Wave II, 2015 (fig.6)playfully weave together complementary threads to generate colour harmonies and a sense of depth. As a result the works reverberate with dynamism but are contained within the spatial boundaries of their frames. Her later work Mandan Shrine, 2016 (fig.1) breaks free of frames. It comprises of multiple thick ‘ponytails’ of soft linen, which are tightly bound at varying intervals with vibrant colourful silky threads. The effect of the oscillating forms and colours is akin to cascading water.

There is a successful synergy between the artworks and film in this exhibition. The films unravel the tales and the people behind the works. Hicks’s installation for Target’s HQ and the accompanying film demonstrate the work’s journey. In this case from the inspiration of a family keepsake – a metal knot belonging to her father – to Hick’s artistic response to it, how the workers in her Paris atelier articulate those ideas through threads and how the work is ultimately realised through its installation.

The exhibition is a joyful exploration through a body of work which continues to innovate, reflect and push boundaries.

Sheila Hicks: Material Voices was organised by the Joslyn Art Museum and ran at the Textile Museum of Canada between 6 October 2016 and 5 February 2017. Karin Campbell was the exhibition curator.

This is the second of three reviews of exhibitions, which I saw during my exhibition research trip to Canada. The trip was supported by the Assistant Curator Training Fund and the V&A Museum of Childhood.