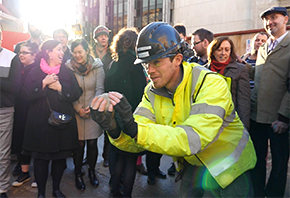 Over the past couple of months I have been devising a bowling game to be played on the Exhibition Road building site.

This game took place last Friday on December 19th, and was contested between two teams. One team made from V&A staff the other from the builders working on site, the hoardings around the building site keep these two groups apart, the game was an event devised to create a meeting.

Wates, the main contractors, kindly agreed to call all building works to a halt and the site was temporarily transformed into a sporting arena.

Over the course of my residency I have been making a huge scroll drawing of the building site, this mainly capture the performance of the people, the patterns, rituals and repetitions of actions and postures they go through.

The idea for the game came from observing and drawing a ritual called the slump test, this takes place several times a day on the building site. I like the word slump, and I like the slump test ritual. The concrete wagon rolls down the ramp into the site, a small sample of the concrete is collected from the back of the wagon in a bucket, the bucket is carried back up the ramp to be put through the slump test. The test involves packing the concrete into an upside down cone on a board, the cone is pulled up, and the concrete slumps, the slump is an indication of the concrete’s workability, the more it slumps the wetter it is. This concrete is then discarded, this particular volume of concrete, from every wagon, misses out on being a physical part of the V&A.

Feeling bad for this discarded concrete, I started to take it off site back into my studio and experimenting by poring into every kind of vessel I could find. I most liked making balls. I would make them by hand in the same way you make a snowball, but taking a lot longer so the concrete can start to set. Concrete is usually poured in large volumes into shuttering untouched by hand, it is quite a meditative process patting and throwing the wet concrete between your hands compacting it into a satisfactory form. I also liked the way the concrete could start to move.

I have a ramp outside my studio and I naturally started rolling these balls down the ramp at various targets and asked any visitors I had to do the same. This was an opportunity to discuss and build some momentum behind the idea, the bucket, used for the slump test was decided upon as the target, and conservator, Sarah Healey, suggested people should make their own concrete balls.

The building site has a much bigger ramp than I do and thought it would be great to stage a bowling game on it, I talked to the Exhibition Road project team and Wates, the main contractor, who both seemed keen on the idea. We set a date for it and I collected volunteers for both teams a few days before. I asked everyone taking part to visit my studio so they could have a practice on my ramp and make their own concrete ball for the game. The making of the balls threw up quite a range of approaches as to how people thought they may gain an advantage.

December 19th was the last day of work on the building site before Christmas and also the last day for a lot of the V&A staff, so was the perfect moment to stage the game. At around 1pm spectators and contestants from both teams gathered at the top of the access ramp to the building site, I set up the bucket at the bottom of the ramp and battle commenced.

Each team was made from 16, one person from each side came forward and had one roll each, whoever got it closest to the bucket got a point for their team but if they got it in the bucket they got 3 points, and then the next two stepped forward.

It was close to begin with but the V&A struck upon a successful slow roll, shown the way by Matilda Pye, and brought a strong travelling crowd, who grew louder with each strike. The builders could not capitalise on their home advantage, and the V&A pulled away to win by a comfortable margin, 19-7.

After a quick transformation all the winner’s balls were presented back to them as medals by Alec Shaw, V&A Head of Projects, who oversees the Exhibition Road Building Project.

I wanted to create some kind of performance/event that could sit amongst all the other countless events and actions that I have observed and drawn, all contributing to the completed building.

A few of the builders were disappointed in their performance afterwards and are keen for an opportunity to restore some pride in the new year….

Many thanks to Neil Lock and Yvonne Ellis from Wates, Alec Shaw, Hailee Kukura, Marco Carini, Simon Goss, Laura Southall, Matthew Raw, Nao Matsunaga and everyone on both teams and all the spectators who came to see it and creating such a great atmosphere around it.

I’ve only just discovered Liam and want to come to the V&A to watch him work and see more of his drawings. Can you let me know when he will be doing a similar event or just when I can see him in action. Brilliant stuff!

Hi Hilary, good to hear you like the work, I am having two open studio sessions on Saturday March 7th one at 11am one at 2pm, you will have to come to the meeting point inside the main entrance and I will pick up people from there and walk them through the museum to my behind the scenes studio, thanks Liam