Artist John Constable spent many happy hours painting the waterways of his eastern England where he grew up in what is now Essex and Suffolk. Rivers ran past the mills owned by his father in Flatford and Dedham and these feature in a number of his paintings. When away from home, it must have been natural for him to want to capture the distinctive watery landscape of other places, like this scene of water meadows in Salisbury – one of my favourite works of his in our collection. 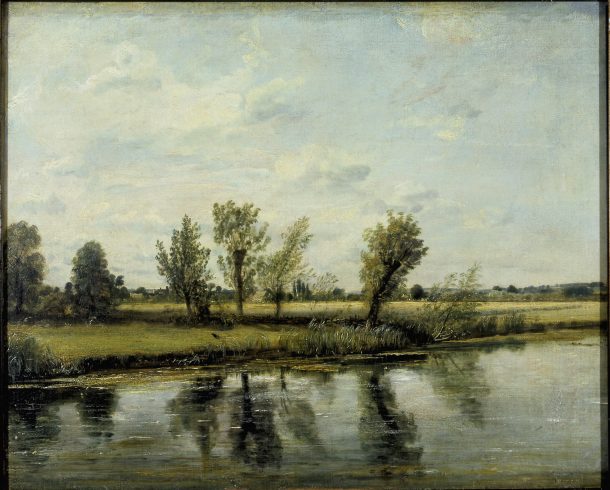 The painting shows a scene on a river just by Salisbury, with the water and sky dominating the canvas, with landscape between them featuring trees and meadows. The water meadows of the title do not seem to be the focus of the painting, but were in themselves of vital importance to the agricultural economy of the southern parts of England at this time.

Water meadows were almost unknown in Constable’s eastern English countryside, where the soil and waterways were not conducive to this system, but since the 16th century, water meadows were ubiquitous in Salisbury and the surrounding areas in southern England, where they improved the effectiveness of farming corn and sheep that was essential to the local economy.

Water meadows are managed by carefully crafted water channels which run all over the field and were used to maintain a thin layer of water flowing over the base of the grass stems. In winter this stopped the ground freezing, and encouraged early growth of crops. More crops meant larger flocks of sheep could be fed.  More sheep produced more manure which fed back into the fields to help produce more corn.

The water meadow channels are not visible from Constable’s viewpoint in this painting but an overhead photograph of a location in Salisbury in Historic England’s document on water meadows shows these telltale shapes in the surface of the field. This document reports that in Constable’s time there were over 15,000 acres of watermeadow in Wiltshire alone – that’s nearly 20,000 football fields of water meadows. 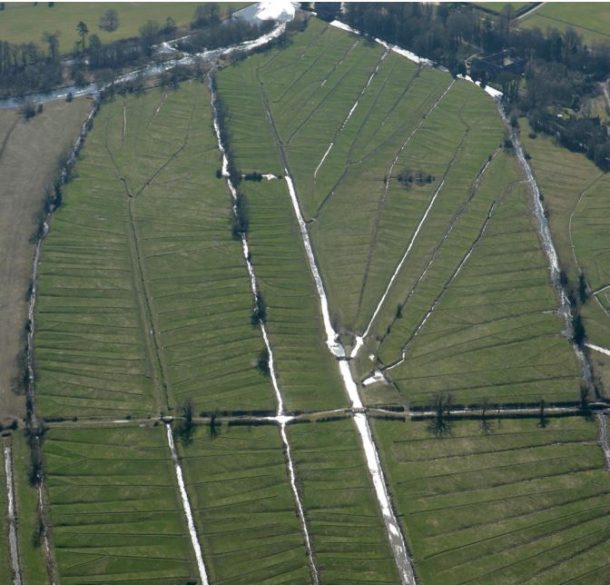 Water meadows have now almost completely disappeared from the countryside, most were abandoned in the early 20th century as agriculture became more industrial. In the late 20th century, Harnham Water Meadows near Salisbury, have been restored to resemble their original look and purpose and celebrate the role of this technique in the history of the area.

Constable may have been drawn to the beautiful serenity of this scene, but he has also given us a glimpse into the hardworking landscape that was part of Britain’s agricultural economy.