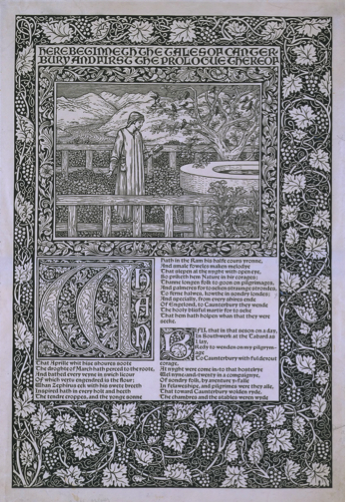 I began printing books with the hope of producing some which would have a definite claim to beauty.[i]

It could be said that William Morris’s career started and ended with the printed word. It began in 1856 at Oxford University where Morris established and edited the Oxford and Cambridge Magazine. He then went on to forge a career which would see him write, illustrate, collect and lastly set up his own printing press. From his first published book The Defence of Guinevere, and Other Poems in 1858, age 24, William Morris sought to create ‘a beautiful book’,[ii] which would match the craftsmanship he admired in medieval manuscripts and early printed books:

I claim the title of works of art, both for these picture-ornamented books as books, and also for the pictures themselves. Their two main merits are first their decorative and next their story-telling quality; and it seems to me that these two qualities include what is necessary and essential in book-pictures[iii]

In 1888, this aspiration was rekindled by Emery Walker’s talk on ‘Letterpress Printing and Illustration’ at the Arts and Crafts Society Exhibition. Three years later and encouraged by Walker’s untiring support, Morris fulfilled his ambition and established the Kelmscott Press in Hammersmith in 1891. This new printing venture coincided with his withdrawal from the day-to-day running of his domestic furnishings company, Morris & Co. From this time onwards, printing became the focus of his considerable creative knowledge and energy.

It was the essence of my undertaking to produce books which it would be a pleasure to look upon as pieces of printing and arrangement of type.[iv]

William Morris was attentive to every aspect of the book’s fabrication, from the content to sourcing the highest quality paper, inks, illustrators, engravers, printers and binders.

He wrote 26 and translated three of the 53 books published during his management of the Kelmscott Press. Religion and chivalric tales were the predominant subject matter. In The Works of Geoffrey Chaucer (fig.1) William Morris combined his two passions: medieval themes and the art of the book. It was the first book started at the Kelmscott Press in 1891 by Morris and his great friend the artist, Sir Edward Coley Burne-Jones (1833-1898).

If we live to finish it, it will be like a pocket cathedral – so full of design and I think Morris the greatest master of ornament in the world.[v]

It took four years to complete and was published shortly before Morris’s death. It is replete with 87 original illustrations, a new ‘Chaucer’ font, as well as 58 ornate letters, borders and frames. It was the Kelmscott Press’s crowning achievement and Morris’s magnum opus, as Burne-Jones wrote, it was the result of their lifelong admiration of early printed works:

When Morris and I were little chaps at Oxford, if such a book had come out then we should have just gone off our heads, but we have made at the end of our days the very thing we would have made then if we could.[vi]

Morris sought inspiration from his own collection of 15th-century printed ‘picture-ornamented books’[vii] from Venice, Ulm and Augsburg to develop the press’s typography, illustrations, and designs.

To design his Gothic font, he looked to ‘Schoeffer at Mainz, Mentelin at Strasburg, and Gunther Zainer at Augsburg’ (fig. 2 and 3) and to Nicholas Jenson (an example of his printed work can be found in Gallery 64 in the Medieval & Renaissance Galleries) for his Roman font:

There was only one source from which to take examples of this perfected Roman type, to wit, the works of the great Venetian printers of the fifteenth century, of whom Nicholas Jenson produced the completest and most Roman characters from 1470 to 1476. This type I studied with much care, getting it photographed to a big scale, and drawing it over many times before I began designing my own letter.[viii]

Morris may have looked back to early printed works for his inspiration, but he was also very forward-looking and was quick to harness emerging technologies, such as photography and magic lanterns, to help achieve his aesthetic aspirations. These technologies enabled Morris to copy, enlarge, project and print the works he was scrutinising as well as creating.

During the six years in which William Morris ran the Kelmscott Press, he developed three new fonts: Chaucer, Golden and Troy. These fonts were designed to democratise his works, making them more accessible to readers: they should be ‘easy to read and should not dazzle the eye, or trouble the intellect of the reader by eccentricity of form in the letters’.[ix] Examples of Morris’s fonts were dutifully illustrated by Sydney Cockerell at the end of A note by William Morris on his aims in founding the Kelmscott Press, together with a short description of the press by S. C. Cockerell, & an annotated list of the books printed thereat, published in 1898 (fig. 4 and 5).

The punches for all Morris’s types were cut ‘with great intelligence and skill by Mr. E. P. Prince.’ Along with the fonts, Morris developed all the ornate borders, title-pages and initials used by the Kelmscott Press (fig.6).

‘He would have two saucers, one of Indian ink, the other of Chinese white. Them making the slightest indications of the main stems of the pattern he had in mind with pencil, he would begin at once his finished final ornament by covering a length of ground with on brush and painting the pattern with the other.’[x]

The first book published by the Kelmscott Press was The Story of the Glittering Plain in 1891 (fig.7). It would be the first of 53 books and over 20,000 copies published during the press’s seven-year lifetime.

Under Morris’s scrutiny each work was produced to the highest calibre and embodied his tireless ideals.

The proof and books illustrated in Figs.1 and 4-8 are now part of a new display celebrating William Morris and the printed book in Gallery 125 in the British Galleries.

[i] Morris, W. A Note by William Morris on His Aims in Founding the Kelmscott Press Together with a Short Description of the Press by S. C. Cockerell, & an Annotated List of the Books Printed Thereat (Hammersmith: Kelmscott Press, 1898), p. 1.

[ii] Morris, W. ‘Some Thoughts on the Ornamented Manuscripts of the Middle Ages’, in The Ideal Book: Essays and Lectures on the Arts of the Book by William Morris, ed. William S. Peterson (Berkeley: University of California Press, 1982), p. 1.

[xi] Morris, quoted in W. S. Peterson (ed.), The Ideal Book: Essays and Lectures on the Arts of the Book by William Morris (Berkeley: University of California Press, 1982), p. 4.