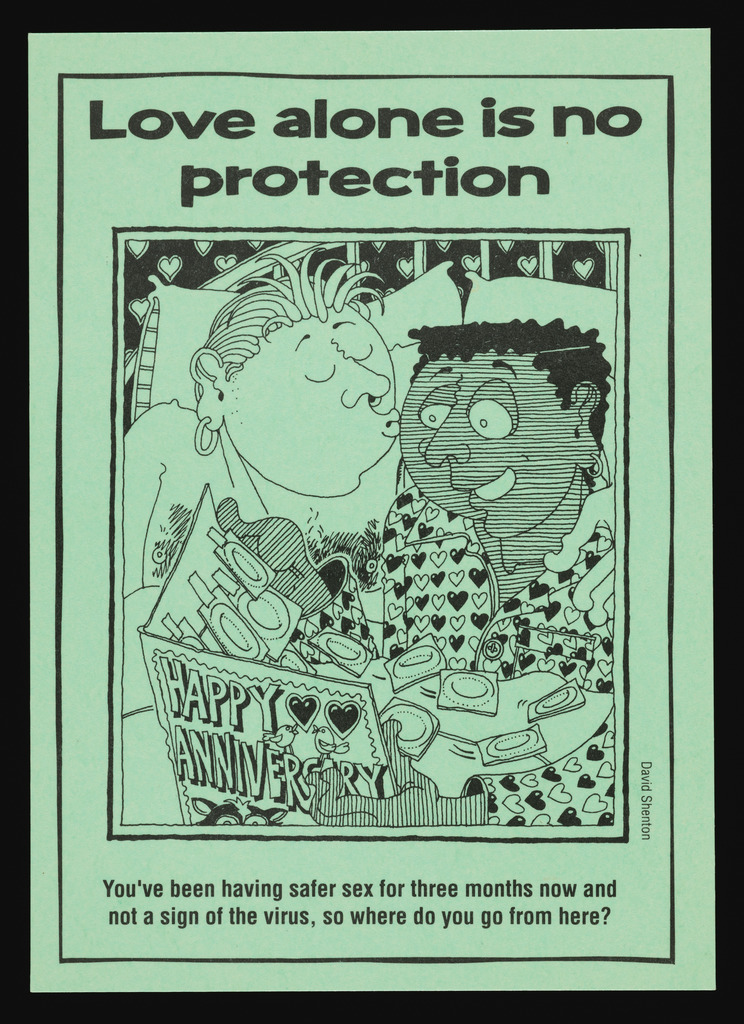 The above flyer was designed by celebrated cartoonist David Shenton and issued by the Health Education Authority in 1991. His work may be familiar to many in the queer community as he was widely published in early titles such as Gay News (established 1972) and Capital Gay (established 1981) and remains a fabulous force in the graphic arts with queer history exhibitions such as ‘Drawn Out & Painted Pink’ (2010). The back of the flyer discusses trust in longer term relationships and the risks posed to the immune system by unsafe sex between two HIV positive people.

Others in the series were illustrated by Malcolm Turner and address the anxiety felt by many who were nervous to get tested. On the back is a list of helplines for advice on coping with the process and the aftermath of a positive result. These are the Terrence Higgins Trust (still going strong), the Lesbian and Gay Switchboard (now Switchboard LGBT+ Helpline), and the National AIDS helpline (now covered by the NHS National Sexual Health Helpline).

Besides providing a wealth of support services, the Terrence Higgins Trust (THT) also designed some rather eye-catching condom packets aimed predominantly at gay and biseuxal men. A message inside reads ‘Hot Sex Now : Safe Sex Now’ with information on preventing HIV, how to use the condom and dispose of it safely. THT were the first charity in the UK to be set up in response to the HIV epidemic.

This is one of eleven small format photographs by Annie Leibovitz for the San Francisco AIDS Foundation campaign in 1993. Entitled ‘Be Here for The Cure’ they urged people not to delay in seeking treatment and advice. Depicting a wide demographic which included lesbian couples and single parents, the series also included Spanish and Filipino texts to reach a broad American public.

We are still adding to the collection and in 2018 kindly received a gift of 20 more flyers for the East London and City Health Authority and GMFA (Gay Men Fighting AIDS) by Declan Buckley who also designed the poster below.

If you would like to see some of this ephemera in person, you can do so by requesting box GG182 in the Prints and Drawings Study Room. The Print Room is currently open only on Wednesdays so please contact us online if you wish to arrange an appointment.