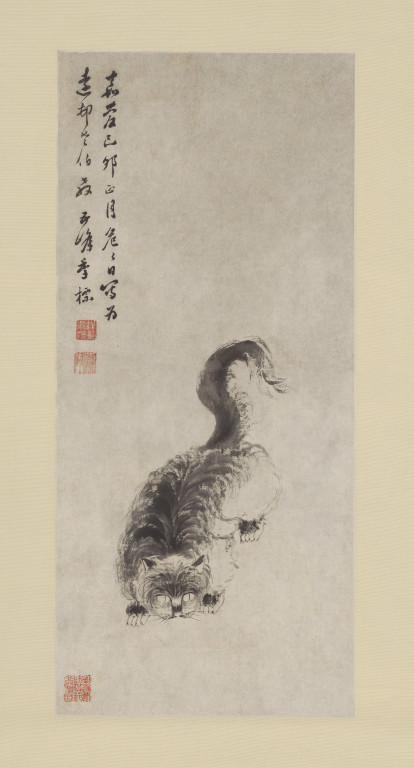 Tonight over a billion people will celebrate the eve of the Chinese New Year. Many will have travelled back to their hometowns to be with their families, in humanity’s largest seasonal migration. Celebrations are also taking place across the world among the Chinese diaspora. This global host of revellers will be turned out in new clothes, giving red envelopes stuffed with cash to their younger unmarried relatives, and filling up with piles of delicious dumplings. Many of them will also hang pictures, prints and paintings appropriate to the occasion.

Here in the V&A Asia Department we are celebrating with a rotation of our Chinese painting displays in the T.T. Tsui Gallery of Chinese Art. Six paintings have been rotated, alongside two new hangs. They cover a diverse array of subjects. From posthumous portraits to modern landscapes in traditional media. There is even a cat intended to protect the household from pests in the New Year. The following are some of the highlights.

A pair of ancestor portraits of an 18th century military official and his wife show us how paintings were used to venerate the dead through idealised images. The couple are surrounded with signs of status and wealth. The husband’s robe features a military badge of the second highest rank. A host of four-clawed dragons cavort across his wife’s robe and outer vest. They sit on elaborate seats, decorated with sparkling inlays of shell and mother of pearl. The seats are even covered with a set of his-and-hers tiger skins, perfectly accessorising their matching martial Manchu look for the afterlife.

In a painting from 1962 by modern master Fu Baoshi (1904-65), glowing, liquid mountains push the boundaries of traditional painting techniques. Fu’s inky modernity is juxtaposed with the archaistic green slopes on an adjacent early 18th century fan. The fan is painted by Qing court artist Jiao Bingzhen (active 1689-1726). Jiao’s work is laden with references to historic painting styles associated with a canon of scholar artists. By 1962, when Fu painted his landscape, Chinese Communists saw Jiao ‘s models as morally suspect. To Mao and his cadres artist like Jiao represented a feudal society that the young People’s Republic was here to replace. Fu makes no references to the painters who so inspired Jiao. Instead, he uses a fresh visual idiom to evoke a heroic spirit for a new Communist state. This approach was known as Guohua 國畫: National Painting.

A hanging scroll of flowering plum blossom at the east entrance to the gallery is particularly well suited to the season. This painting is by the late 18th-mid 19th century painter Fang Mei. Chinese Plum blossom, prunus mume, is a hardy, long lived plant which flowers in late winter or early spring. The plum’s petals emerge before its leaves, and last only a short time. This transient beauty was grist to the creative mill for dynastic China’s poets and painters. For centuries it has been symbolic of the New Year, and the associated return of life to the fallow land. Its hardy blooms also made the flowering plum a suitable metaphor for virtuous scholarly talents overcoming adversity. By the time Fang Mei painted the scroll now hanging in the Tsui Gallery this was a well-established subject. Despite the timelessness of his theme, Fang has carefully depicted the time of day at which we are seeing the blossoms. The paper surface is suffused with a light ink wash, evoking a moonlit night. Only the petals are unmarked. They retain the white of the paper surface, outlined in black ink as they fall from swaying branches.

Malcolm McNeill will be giving a gallery talk to introduce this painting rotation at 1pm on 2 February 2017. Full details here.

Interesting and useful information
Chinese Ancestor Paintings
in this article
Thank you.