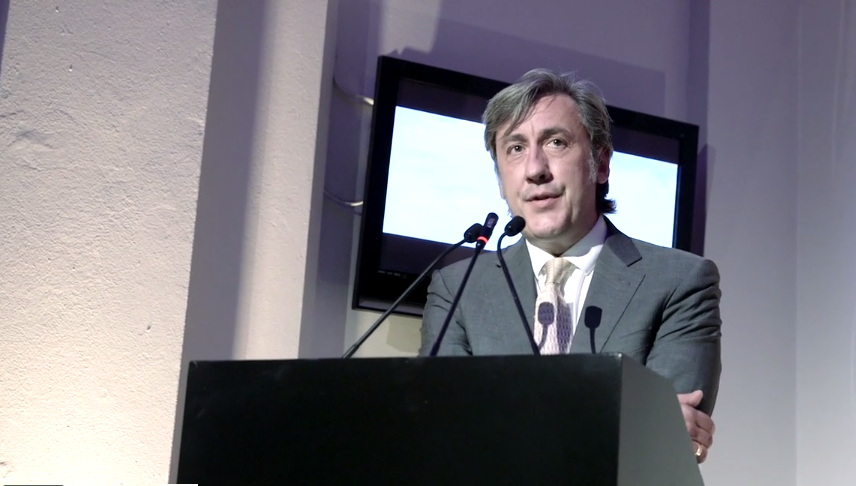 On 17th September 2014 at the launch of Constable: The Making of a Master, art critic and broadcaster Andrew Graham Dixon spoke about the painter, his radical approach, working methods and lasting legacy.

Open to the public from 20 September 2014 – 11 January 2015. Constable: The Making of Master reveals the hidden stories of how John Constable created some of his most loved and well-known paintings. On display will be such famous works as The Haywain together with the oil sketches he painted outdoors direct from nature.

Thank you very much, it’s a great honour for me to speak at this occasion because Constable is one of my favourite artists. One of the greatest artists, I feel, of the entire British tradition, a great world artist. But he’s suffered a peculiar fate. In his own time he was misunderstood because he was far too adventurous, for most people’s tastes, and in the 20th and 21st centuries he’s, in a sense, been praised for the wrong things, been admired for being almost the perfectly conventional English landscape painter which he certainly wasn’t. I still feel he’s an artist who awaits general understanding, and I think this exhibition is really going to help.

Constable was a stubborn, brilliant, difficult, radical painter – truly radical painter. In 1821, in a letter to his friend John Fisher he made a statement, which I think is probably the single most adventurous thing any painter said about painting in the 19th century. He simply said, “I should paint my own places best” and then he dropped in, “painting is another word for feeling”. Now who dared to say that in the early 19th century? Who recognised it? Constable knew what he meant, no one else knew what he meant. It’s taken a long time for us all to catch up with what he meant and to see what he meant.

In order to understand Constable, I think you need to understand his predicament and recognise where he came from. He came from England, a place where, as Joshua Reynolds once said, “the only subjects a painter can paint are milord’s horse, house, wife, dog and face”. In other words, the range of subjects that were acceptable in this country was very very limited. So the Great British artists all had to do incredible things with the lower genres of art – Stubbs with animal painting, Turner and Constable took landscape painting, the lowest of the low, not really an art form at all in the minds of many teachers of art in the 19th century, just a form of painted photographic record of a place, they took that genre and made it profound, made it deep. Turner made it a medium for philosophical speculation about the nature of light, that are still being digested today, and it’s a wonderful coincidence, if it is a coincidence, that late Turner is currently on at Tate Britain.

Constable took landscape and he made it the vehicle for feeling, for emotion. And the most radical thing he did with painting can be seen, I think, in the most radical landscape painting of the 19th century, which is the oil sketch – whether it’s a sketch or a finished work is open to question – for The Leaping Horse, which is here because no one in Britain at Constable’s posthumous sale was prepared to pay more than the 12 guineas which it and the oil sketch for the Haywain were bought in. That’s why it’s here. And if you look at that sketch, as Patrick Heron once said, what Constable has done in that painting is he has broken the still mirror-like surface of 19th-century academic art. He has invented a new kind of surface for painting. He’s taken hints and suggestions, that as this show so beautifully shows us, he found in artists like Rubens and Titian – there’s no Titian here, but you can see those at the National Gallery – he took those suggestions and turned them into a new form of broken language. Which would have a huge impact on the future of painting. And he took landscapes and he made landscape talk about politics, the past, love, those boiling clouds that we see above Hampstead, and perhaps Constable willing the air into his tubercular wife’s lungs. These are deeply expressive paintings at a personal level and at a deeper level. Constable when he paints Salisbury Cathedral is meditating on perhaps the future of the Anglican church in England, the nature of the political landscape as well as the landscape that we can actually see. He’s turned landscape painting into way of talking about things that really mattered to him.

And it’s another nice coincidence, I think, that at the Royal Academy at the moment, just about to open, or has it just opened already? There’s a retrospective of the work of Anselm Keifer, an East German artist, meditating on the Holocaust, war, the things that matter to him, have mattered to him, and to Germany. And doing so in the form of huge landscape paintings with profoundly broken surfaces. Keifer is, of course, an admirer of the work of Constable.

So I think it’s a wonderful time for this exhibition to be happening, there’s some wonderful connections to be made and what’s great about this exhibition is – I’ve only just seen it – the way in which it tells us not only about Constable’s engagement with nature and his engagement with feeling, but also how he engaged with the past, the history of painting, in order to find himself. It’s a tricky balancing act, it’s been managed beautifully and I really hope you enjoy the exhibition.

Much of John Constable’s current reputation as a painter rightly rests on his development of the ‘plein-air’ oil sketch and his naturalistic style of painting. Also...