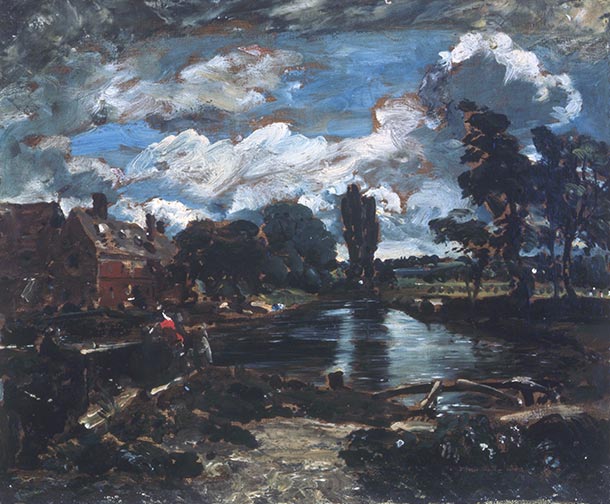 Much of John Constable’s current reputation as a painter rightly rests on his development of the ‘plein-air’ oil sketch and his naturalistic style of painting. Also powerfully engaging for a contemporary audience is his autobiographical choice of subjects. In this piece, Winsor & Newton Resident Artist Mathew Gibson explores Constable’s complex personal motivations for painting such subjects.

Marking much of the boundary between the counties of Essex and Suffolk, the river Stour runs through the village of East Bergholt and the Dedham Vale. At the turn of the 19th century, painter John Constable’s father Golding was a wealthy businessman in this area, owning Flatford and Dedham water mills and numerous stores and warehouses. Golding’s barges would take flour from the mills along the Stour to Mistley Harbour, from where his sailing ship, The Telegraph, would transport it to London. Despite him being the fourth child, Golding’s firm intention was that John would go on to run this substantial business for the benefit of his six siblings.

Letters show that John had a shy, introverted personality and was much happier on his own, sketching out and about in nature. His growing desire to become a professional painter was in direct opposition to his father’s wishes and went on to cause enormous conflict in the family. Golding eventually relented, allowing John to move to London for his studies. Constable would eventually take a studio in Rathbone Place where Winsor and Newton established their first business premises in 1832. In the decade following 1798, Constable was rarely in Suffolk and could be found sketching in places of established beauty such as the Lake District, or studying the Old Masters at the Royal Academy.

On a return visit to East Bergholt in 1809, Constable began a long courtship with Maria Bicknell. The two were socially well-matched, but he had chosen the granddaughter of wealthy local pastor Dr. Rhudde, his father Golding’s bitter life-long enemy and someone who vehemently opposed the union. Already shy and distant, John Constable’s choice of career and fiancée made him the stuff of local legend and gossip, further alienating him from village society.

Around the village, mills, fields and waterways formed a pre-industrial working environment populated with labourers and others going about their work. Tourists were unlikely and any visitors would be there on business. As the son of the land owner Constable had privileged access to these areas, allowing him to sit and paint his oil sketches undisturbed. At the time he began courting Maria, Constable made his first mature paintings of the landscapes around East Bergholt and the Stour . His love of nature and the effects of light falling on it inspired him to create a ‘natural painture,’ but the views he chose to paint also had powerful personal associations for him: the mills and barges owned by his father, the fields and pathways where he courted his future wife.

Part of the reason Constable is such an engaging artist for contemporary audiences is because his conflicting personal motivations are explicit in his paintings. Socially rebellious and contrary, Constable rejected the running of his family’s business. He nevertheless felt compelled to return and paint, over and over, the locations most strongly associated with his storied past.

Winsor & Newton is a proud sponsor of Constable: The Making of a Master, currently running at the V&A until 11 January 2015.

Have a print of the above its a collection of twelve is it worth any money?

The guy was pure shit

Andrew Graham Dixon opens Constable: The Making of a Master

On 17th September 2014 at the launch of Constable: The Making of a Master, art critic and broadcaster Andrew Graham Dixon spoke about the painter, his radical approach, working...