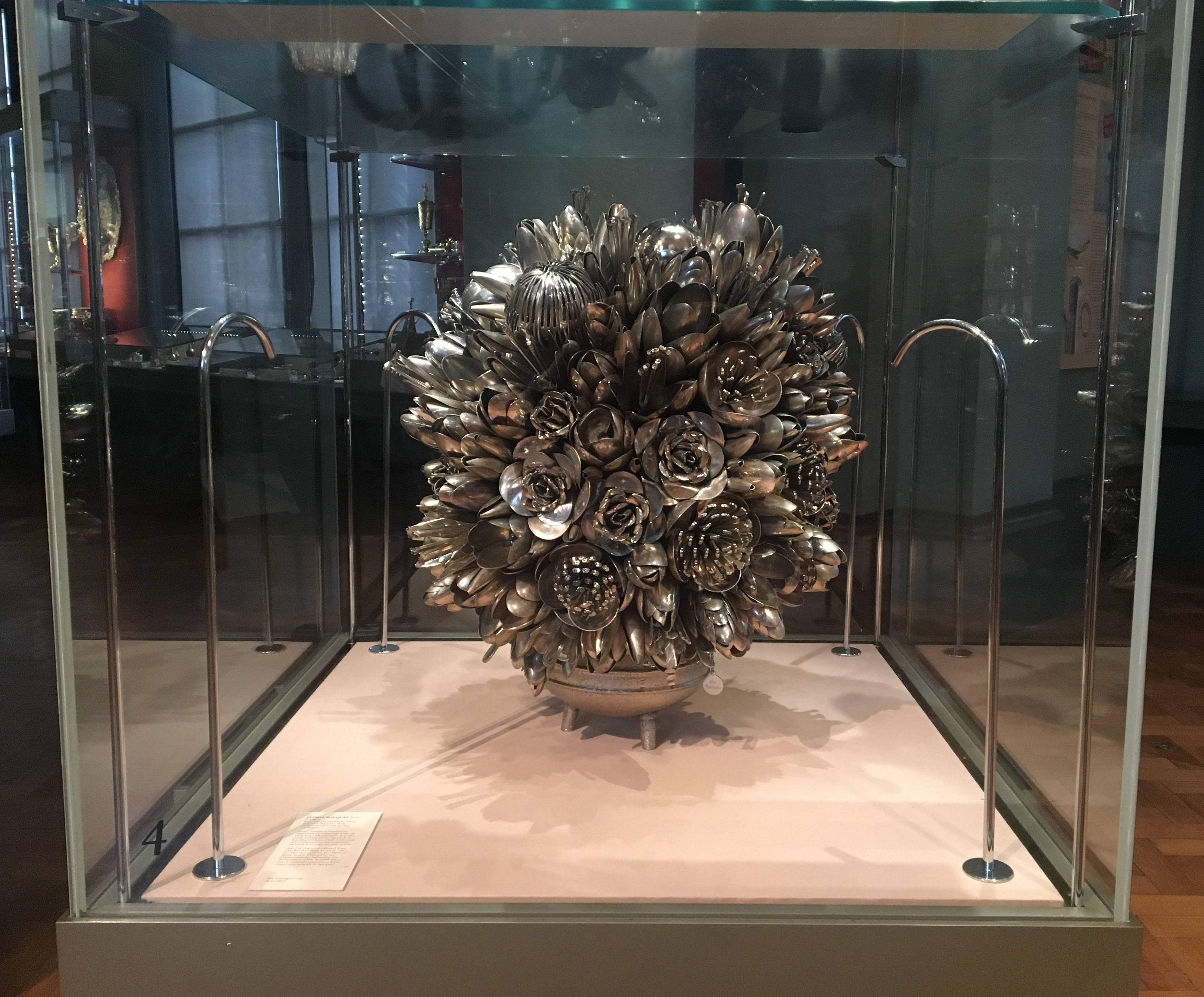 If you have been to the V&A’s Silver Galleries recently, you may have spotted this striking bouquet of silver flowers. The sculptural work by British artist Ann Carrington, entitled Devil’s Trumpet, was installed in Room 68 at the end of August.

Devil’s Trumpet was made by Carrington in Margate in 2016, and was exhibited in her solo show at the Royal College of Art in July of that year. It was acquired by the V&A shortly afterwards, and we are delighted that it is now on display in our Silver Galleries.

A closer look at the bouquet reveals something surprising. The flowers are in fact made from objects that you probably use every day: steel, nickel and silver plated forks and spoons. Through the careful arrangement of these familiar objects, welded and soldered together, Carrington has created a piece that resembles a bouquet of flowers such as roses, hydrangeas and proteas. Nestled amongst these is also a single deadly Devil’s Trumpet flower (from which the sculpture takes its name).

As you might imagine, such a vast assemblage of silverware is extremely heavy! Installing the sculpture in its display case therefore took some very careful planning. The work was carried out by three of the V&A’s Museum Technicians, who made use of some heavy-duty lifting equipment to gently manoeuvre it into position.

The sculpture is inspired in part by the sculptural garlands of Grinling Gibbons, and by the ‘memento mori’ often found in Dutch still life paintings from the 16th and 17th century. In these paintings objects such as flowers and pocket watches are used to remind the viewer of the passage of time and the impermanence of life.

Another of Ann Carrington’s works was seen by billions of TV viewers worldwide in June 2012, when she was asked to make a banner for the Queen’s Diamond Jubilee. Her Royal Jubilee Banner was hung from the stern of the Royal Barge The Spirit of Chartwell, the centrepiece of the Jubilee pageant on the Thames. The banner displays the Coronation Crown flanked by the lion and unicorn of the Royal Coat of Arms. These are embroidered from over half a million buttons, which recall the elaborate suits of London’s Pearly Kings and Queens.

You can find Devil’s Trumpet in Room 68 on the third floor of the V&A, where many other objects from the V&A’s collections of Modernist to Contemporary Silver are also on display.

Two new bouquets by Ann Carrington will be on display at Paul Smith in November, alongside other new works by the artist. You can also read more about Carrington and her work, including Devil’s Trumpet, in November’s issue of Architectural Digest.