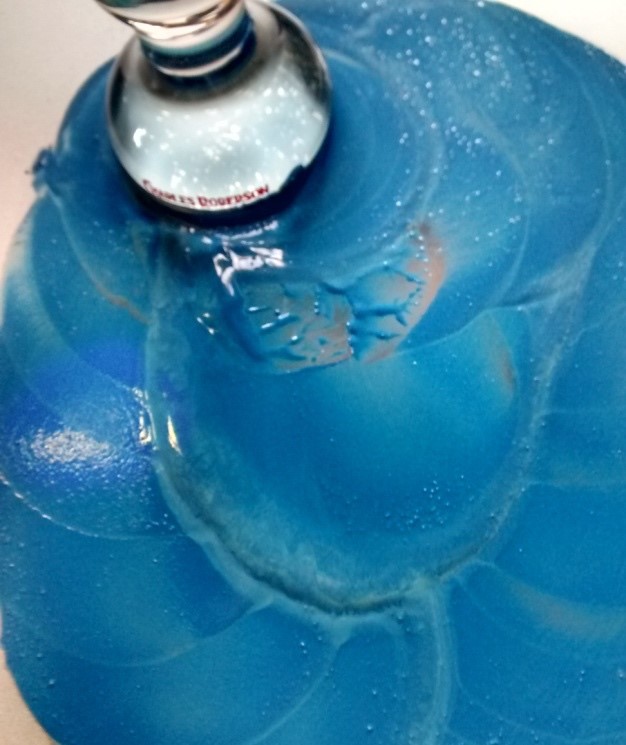 The Thinking and Experiencing ‘Techne’ course is a satellite project of the ‘Making and Knowing’ project based at Columbia University, in New York, and this year was also a collaboration with the V&A’s Robert H. Smith Scholar in Residence Dr. Spike Bucklow, from the Hamilton Kerr Institute. For more details on the workshops see News & Events at the RCA.

In the following posts, students Dani Trew, Mariana Lima, Mia Spampinato, Elif Uluca, and Karen Morton describe their experience of making azurite pigment, the first of a series of experiments:

Azurite has been used as a pigment since antiquity. Cennino Cennini’s fifteenth century Il Libro dell’Arte records that it ‘exists in and around the vein of silver’ and that it ‘occurs extensively in Germany’. This comment refers to the practice of harvesting the mineral from silver mines in Saxony from the twelfth century onwards.

Azurite is a copper carbonate which is chemically unstable and often undergoes a process of oxidization so that the surface becomes malachite. While azurite is a deep blue, malachite is a bright green and when ground together a pale turquoise pigment is created. Cennini’s recipe for making azurite pigment is essentially a guide to separating the azurite from the malachite, or as he calls it, bringing it ‘to perfection’.

Cennini tells the reader that one must grind the rock into a powder and add water, but that this must be done ‘very moderately and lightly, because it is very scornful of the stone.’ When translating the original text in 1930s, D. V. Thompson interpreted Cennini’s instruction as a warning against grinding the mineral too much, which would increase ‘the reflecting surface and resultant scattering of light’, making the colour paler and less vibrant.

When we carried out a reconstruction of the recipe, we experimented with grinding the rock to different degrees of fineness. We began by breaking up the azurite rocks into smaller pieces with a hammer in a granite mortar, and then proceeded to grind them with a pestle. Grinding the stones allowed us to understand the importance of achieving the right particle size: while large granules will give a brighter, more desirable colour, smaller granules will create a paler colour. However, if the particles are too big, it is difficult to separate the azurite from the malachite. It became clear that there is a perfect particle size which provides a vibrancy of colour while also allowing the malachite and azurite to disaggregate. At this point we began to understand the importance of embodied knowledge for following early modern recipes, as it would be difficult to convey the ideal size textually to someone who had never carried out the process before.

Once we achieved what we judged to be the ideal particle size, we transferred the powder to a glass plate (Cennini’s recipe suggests a porphyry slab) and added a few drops of water. We then proceeded to grind it with a glass muller, a type of pestle made of glass and flat at the bottom, making small, circular movements, and ensuring all the grounds were evenly mixed.

At this stage, again we had the chance to experience how important it was for artisans to use all of their senses in the early modern period: to know when the mixture has reached the right consistency one must listen to the sound the glass muller makes as the mixture is worked on the glass slab, and feel the point when it starts pushing against the muller. At this point, it is also possible to see the malachite particles trying to separate from the rest of the paste.

Once the paste reaches the right consistency, it is time to start filtering it, a process that will be discussed in the following blog post in this series.