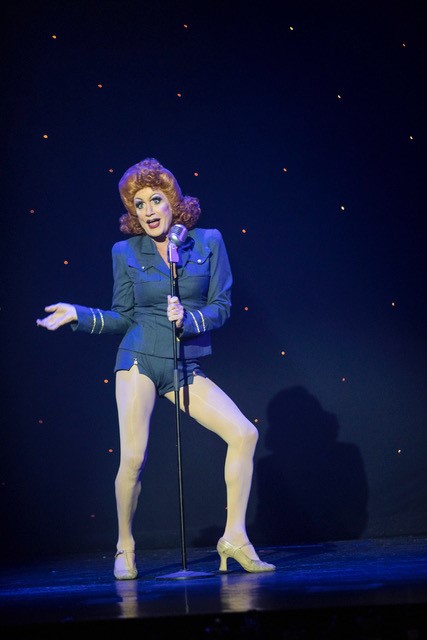 Pleasure gardens, song and supper rooms, and music halls have all been places of entertainment where audiences enjoyed popular entertainment in a convivial atmosphere, eating and drinking during the performance. While most theatres today restrict food and drink to the foyers and the intervals, the spirit of music hall is alive and well in Blackpool’s Funny Girls, where DJ Zoe unwittingly takes the role of the music hall chairman, food is served in the auditorium, and the glamour of Betty Legs Diamond is as much of a draw as Vesta Tilley’s cross-dressed, sharp-suited dandy, soldier or sailor in the late 19th century.

Everybody in Blackpool knows Funny Girls, the cabaret show bar in the Lancashire seaside town famous for the Blackpool Tower, the Blackpool Illuminations, Blackpool rock, and a good night out. Basil Newby MBE, managing director of In The Pink Leisure and owner of Funny Girls, grew up in Blackpool – a true Sangronian. Stars staying at his parents’ theatrical boarding house often arranged free tickets to their shows for his family. Seeing some of the best performers of the day including Shirley Bassey, Tom Jones, and the Beverley Sisters, gave Basil an early love of show business.

Basil himself has been in the business of good nights out in Blackpool since 1979 when the entrepreneur and former Pontin’s bluecoat leased The Flamingo Club and opened it as a nightclub presenting drag acts, including that of the young Liverpudlian entertainer Paul O’Grady and his group The Playgirls. When a chance to buy the whole property seemed doomed by banks and the brewery who balked at financing a gay club, Basil found Vaux, the brewery whose backing saved The Pink Flamingo. He went on to open Pepes Bar and Basil’s on the Strand, and in 1994, inspired by seeing The Ladyboys of Bangkok in Thailand, his own cabaret revue bar Funny Girls, originally housed in an old furrier’s shop in Queen Street and subsequently extended into two adjacent buildings to accommodate the crowds that queued to get it. When compulsory purchase meant a move, the council suggested the Odeon on Dickson Street, the magnificent grade II listed cinema built in 1939 by Oscar Deutsch.

Originally seating over 3,000 people, the Odeon had been closed and boarded up since 1998. In 2002, at a cost of over £2 million, Basil installed Funny Girls, The Flamingo Club and Buzz Bar in the building, opened that July by the queen of Diva, Joan Collins. The building’s sensitive conversion and retention of many features of its original Art Deco interior by the great Odeon interior designers Michael Egan and Eugene Mollo earned Basil a civic award. In 2014 he was also honoured with an MBE for his contribution to the local community and innovative business development.

Visitors to Funny Girls can dine in its 100-seater restaurant before the show, or order bar snacks and drinks in the auditorium from cross-dressed waitresses in the VIP booths or the standing area. Usually crowded on Saturday nights, the standing area is best for seeing the revue close up and dancing to tracks played by the glamorous DJ Zoe between the cabaret spots. Zoe, or Adrian Thornton who began working at the Flamingo Club aged 18, has been DJ and compere of Funny Girls since it began. Her acerbic wit and quick repartee keep everyone entertained as much as her glittering frocks and jewellery, sumptuously styled wigs, and killer-heeled, gem-encrusted platform shoes – each outfit teamed with matching microphone cover.  She even joins the company at the end of every show for its spectacular finale.

While DJ Zoe rules the auditorium, the show is the province of its legendary star Betty Legs Diamond or Simon Green, who has appeared in seven Royal Variety Shows. Trained as a dancer, Betty performed in his first major London musical in 1984 as lead tap dancer at the Palace Theatre in On Your Toes. Following other West End shows including the London Palladium’s one night extravaganza Stairway to the Stars featuring Lorna Luft in November 1989, Betty swapped trousers for tights and created her own late-night cabaret act in clubs and pubs, and the double act Betty Legs Diamond and Dixie, with Dixie Knight. In 1994 she created the first Funny Girls show in Blackpool and went on to become its choreographer, producer, director, and star with an inexhaustible talent for creating new and inventive choreography for the sumptuously dressed and lit numbers she designs for each season. Miss Amber her understudy and herself a Funny Girls dancer for 21 years, presents her own show on Tuesdays, allowing Betty a break but no rest for the other dancers.

Betty creates new shows for Christmas, spring, summer and Hallowe’en, rehearsed during the day in true repertory theatre format with the existing show running in the evenings. It’s a relentless schedule with performances six nights a week, but the energy of the troupe, all professionally trained dancers, sees them through each evening, despite the extra hours of make-up for the girls, the amount of dancing and numerous costume changes. Many costumes, sets and props come from the theatre’s stock overseen by the wardrobe manager Mark Woodruff; wigs are re-styled for each show, and some costumes are specially made or bought, such as those for this year’s spectacular Space finale, complete with silver boots and towering feather headdresses for Betty, Alexis, and Scarlett and Zoe.

There is nothing quite like Funny Girls in the UK, performed on the Odeon’s vast proscenium arch stage, with its adrenaline-fuelled choreography, inimitable comedic moments added by Betty, her legendary legs, the great costumes and lighting, and the sheer irreverent enjoyment of audience and cast alike.

Vesta Tilley once said she could express herself better as a boy. A hundred years later, Simon Green, his cross–dressed dancers, Zoe, and bar staff are certainly expressing themselves brilliantly as girls with lashings of glitz and glamour. As Basil intended, Funny Girls is a place for everyone, gay and straight, young and old. Many come to celebrate special occasions, or just to enjoy a great evening out. They may not realise they are following in the footsteps of 19th century popular entertainment, but Blackpool loves it.

We have been going since FGs first opened This is the best show ever All the stars visit when over here and the red arrows
Betty Legs is remarkable so much talent and Zoe is so entertaining,she keeps the whole audience enthralled and is so good in the finale.All the boys and girls are amazing.massive thank you to all concerned over the years so many have enjoyed the various shoes,my favourite is the Halloween Show especially Thriller fantastic.

Basil is a delightful, yet down to earth adorable guy. He has given so much joy and enjoyment not only to members of the lgbt communities over the years, but also to the wider public through his various establishments/entertainment businesses. Keep up the great work Basil, you’re a real gem and many like me appreciate you.Keith drury. X

I wrote my MA dissertation on the Funny Girls revue bar! It nailed me a distinction! It was also one of the best research projects ever! (Simply because of the raucous night out in Blackpool)

I’ve had the pleasure of working in funny girls in some many guise.. TIP is an amazing company to work for and all the venues deserve a bit of publicity as basil has made a big mark on Blackpool so here’s to many more fabulous nights…

I was generously invited to photograph at Funny Girls a few years ago for my B’pool book. The whole enterprise epitomises the potential Blackpool has to be a landmark British destination of distinction . If only the whole town could emulate the creativity,’ class’, quality and spirit of Funny girls! Basil it’s begetter should be made Mayor and be given carte blanche to transform the town. Funny Girls is an invention of the NOW that has no parallel in British productions I have ever seen. True quality entertainment for all. I salute the whole team.