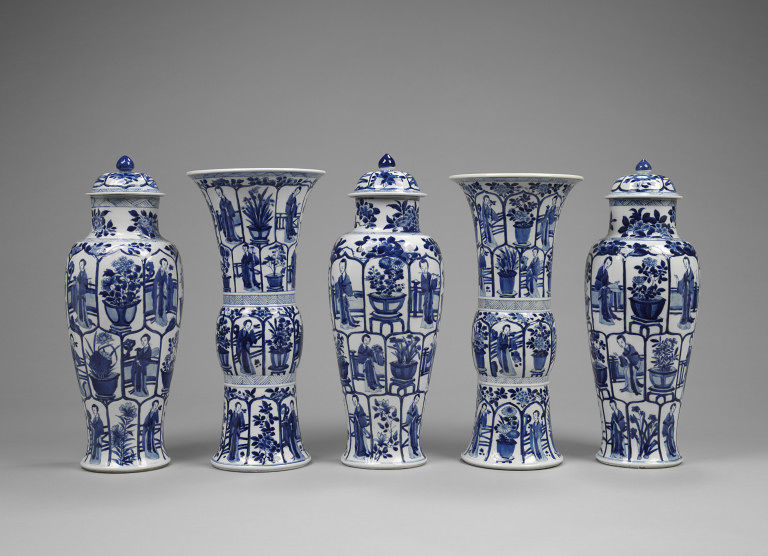 The idea for the display Garnitures: Vase Sets from National Trust Houses has been brewing in my head for almost two decades. Ceramic scholars describe matching sets of vases as ‘garnitures’, vessels that ornament or adorn (‘garnish’) a specific location, such as a chimney or the top of a cabinet. I was researching the history of vessels associated with the display of flowers and searching for unusual vase shapes made between 1650 and 1950 to create a scrap book (it was before Pinterest!) . In looking at pre-1970 auction catalogues and books, I became aware that many of the single vases I was interested in had originally formed parts of larger sets of three or even five pieces.

By the later twentieth century, collectors were apparently less interested in displaying sets of vases with matching decoration – perhaps they were too costly or victims of the modernist taste for simplicity.  When country house collections were dispersed in the early twentieth century, dealers gradually began to split garnitures up and sell them as individual vases or as pairs. Few museums have the room to display pairs or sets of similar vases, so curators have tended to focus on the study of individual vases, discovering the design sources for the shape and decoration and identifying the designer, as well as researching when and where they were manufactured. Consequently, the study of ceramic garnitures has languished.

In 2003, I began to research the ceramics in the collection of the National Trust, which numbers almost 80,000 objects, displayed in over 300 properties. I found many vase sets, but only a few were complete. Most no longer formed complete three- or five-piece sets as they were missing a beaker or jar. Some of the large jars, having lost their covers, had been converted into lamps when electricity was introduced in the early 20th century.

I also began to search through the various family archives housed in the local public records offices looking for documentary evidence of their ceramic acquisitions in invoices or of their display recorded in probate inventories describing the contents of each room. I tried to establish who had purchased these objects, where and when, and how they had been displayed over time, whether in the London town house or a country seat. My findings are included in Ceramics: 400 years of British Collecting in 100 Masterpieces (Philip Wilson Publishers, London, November 2016). It became apparent that as early as the 1640s, the British aristocracy were purchasing pairs of Chinese porcelain vases, especially rolwagens (a specific vase shape with a waisted neck, made between 1630 and 1660). These pairs were clearly for symmetrical displays.

British inventories of the late seventeenth and early eighteenth centuries often record  twenty or more ‘china’ objects arranged above a Japanese lacquer cabinet-on-stand and sometimes the items even overflowed onto the floor below. The objects were rarely listed in recognizable detail, but such assemblages often remained unchanged for centuries, recorded in later inventories. Interestingly, there are very few references to five-piece vase sets in early English documents pre-1725; three-piece vase sets appear to be more common. When the opportunity arose several years ago to plan a display in association with the National Trust at the V&A , I naturally suggested garnitures!

Much of this research can be found in the temporary display in Gallery 146, opening on 11 October 2016, and in the accompanying publication, Garnitures: Vase Sets From National Trust Houses, V&A Publishing, London, 2016. The display, publication and symposium have all been generously supported by The Headley Trust.