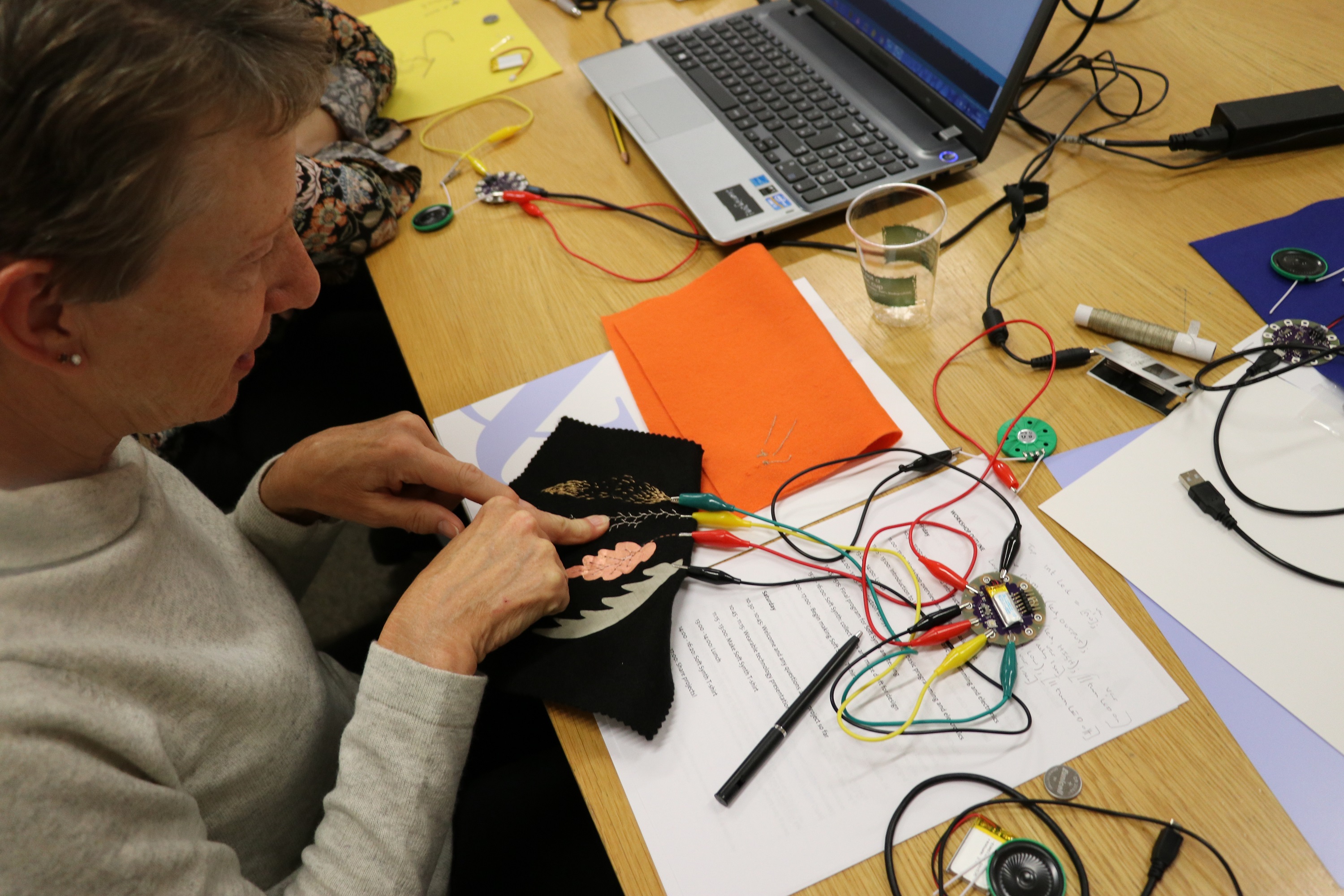 By Anna Blumenkranz and Emilie Giles

When we imagine wearable technology we might think about activity trackers such as the Fitbit or clothing which can be swiped to give us information such as the Google and Levi Commuter Trucker Jacket. However, there is also a playful and DIY-craft-based approach to wearable technology. We ran a two day workshop at the V&A exploring how we could embrace these experimental hand-made wearables, and empower each participant to tweak electronics to create their very own wearable piano or synth.

The project was inspired by the Fabric Piano project by Leah Buechley and Kanjun Qiu in their book Sew Electric, which uses the Lilypad Arduino Simple Snap and conductive threads and fabric to make a soft instrument based on capacitive sensing. We wanted to build on this exciting tutorial and come out with our own version of it. Anna had already ran her own version of the workshop before in Munich and we thought the V&A audience would love it too!

We began the workshop by sharing our own artistic practice and research as well as briefly talking through a short history of wearable technology.

We then moved straight into the practical beginnings of the course, asking participants to sew their first circuit using conductive thread and an LED:

This is always a great exercise to start with, as it demystifies how to work with conductive thread and allows the participants to gain a clear practical understanding of basic electrical circuits, and the importance of polarity when working with components.

We next moved onto an introduction to programming and how to code in the Arduino environment, going through simple sketches such as how to blink an LED and also how to start working with sound (not as simple!). Our participants were all new to programming, but courageous in their efforts and all mastered working with the Lilypad very quickly – this was great to see :)

We ended the day with some visual design, asking the participants to sketch out how they wanted to personalise their T-shirts and thinking about how they would incorporate the circuit in it. 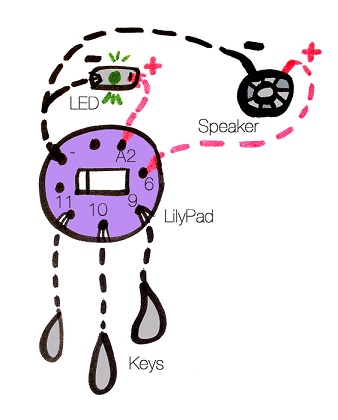 We began the second day with some tea and coffee whilst we showed the group work by colleagues in our field which we love. We discussed Kobakant’s projects, and well as those by Afroditi Psarra, Lara Grant and Irene Posch and Ebru Kurbak.

After that we went through the code for our piano project, and discussed the principles of capacitive sensing, which allows a one-point contact of conductive material to detect the location of touch (similar to touch-screens) and to trigger sound.

Then participants were asked to create a capacitive sensor sample, equipped with conductive thread and fabric, testing out their future T-shirt design ideas, which they incorporated later on.

Finally, it was time to work on musical T-shirts! Participants explored different sewing techniques, each creating a unique design. They each also soldered snaps to speakers for attaching to their circuits.

By the end of this two-day workshop everybody had accomplished their very own version of a wearable T-shirt piano. They had mastered the basics of capacitive sensing, circuit building with a microcontroller and coding, and were ready to jam!

Emilie Giles is a UK based artist and researcher currently studying for her PhD at The Open University in Human-Computer Interaction using e-textiles in hands-on making workshops with blind and visually impaired people. Emilie has much experience in teaching people how to build their own creative technology projects, having been Co-director and Head of Outreach and Participation at Codasign for over three years, and is a visiting lecturer in physical computing and interaction design at University of Westminster, London College of Communication and University for the Creative Arts.

Anna Blumenkranz is a media artist and educator based in Munich, who works within the field of wearable technology and e-textiles. She is a lecturer at the Ludwig-Maximilians-Universität München since 2011. In May 2016 Anna has developed and produced a DIY e-textile kit “Glow-Bots: Nähen mit LEDs” with KOSMOS publishing house. She is currently working on a book Wearables: Sewing with Electronics for Franzis publishing house, which is due to be published in May 2017.