28 January 2013 marks the 200th anniversary of the publication of Jane Austen’s classic novel Pride and Prejudice. Thanks to numerous TV and film adaptations of her works, Jane Austen’s name has become synonymous with the neo-classical style of dress that was popular in the late 18th and early 19th centuries – it is almost impossible to imagine Elizabeth Bennet and Mr Darcy without thinking of empire-waisted gowns, bonnets, waistcoats and starched collars.

The V&A’s collections are a useful resource for anyone who is interested in finding out more about fashion in this period. Here are just a few examples:

This fashion plate from June 1808 could easily be a portrait of the Bennet sisters: 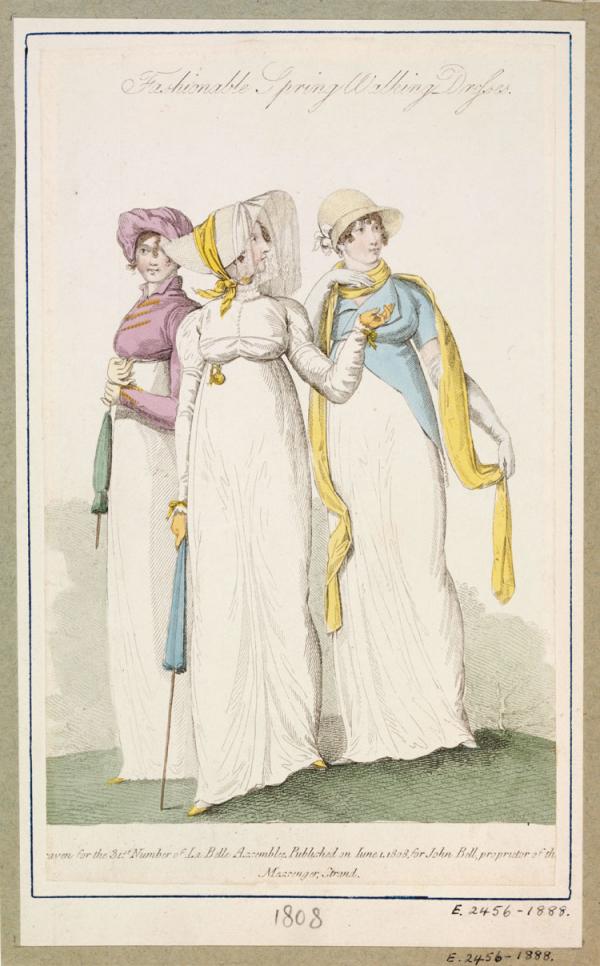 Fashion plates were used by tailors and dressmakers in the 18th and 19th centuries to spread the latest trends in clothing. Before photography was invented, they were the main way that young ladies found out about the latest fashions.

In Pride and Prejudice, Elizabeth Bennet famously causes a stir by walking several miles across country to visit her sister Jane who has been taken ill. For such a trek she would need a sturdy pair of shoes: 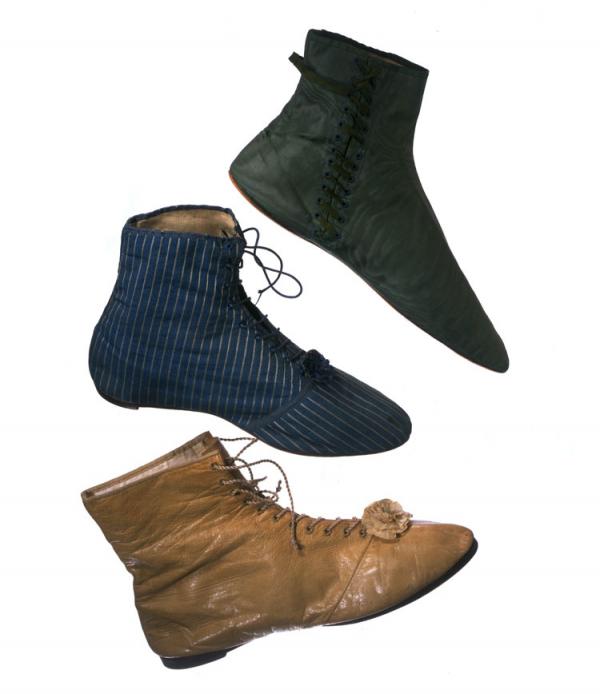 We often think of 19th- century ladies as wearing very dainty and elegant fashions, but in fact, by the early 19th century, boots such as these had become common for young women for day wear, particularly if they needed to walk a long way.

However, something that was not fashionable was a suntan, so a bonnet was essential: 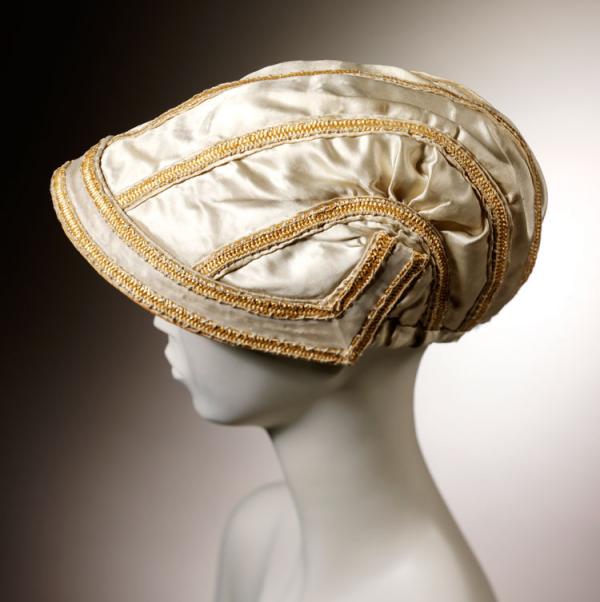 This example is made of satin and straw, and was intended for use in the summer – perfect for touring Derbyshire and making impromptu visits to Pemberley.

Of course, a key moment in the relationship between Elizabeth Bennet and Mr Darcy is the ball at Netherfield when the couple dance together the first time. This red dress is a striking example of women’s evening wear from about 1807-1811: 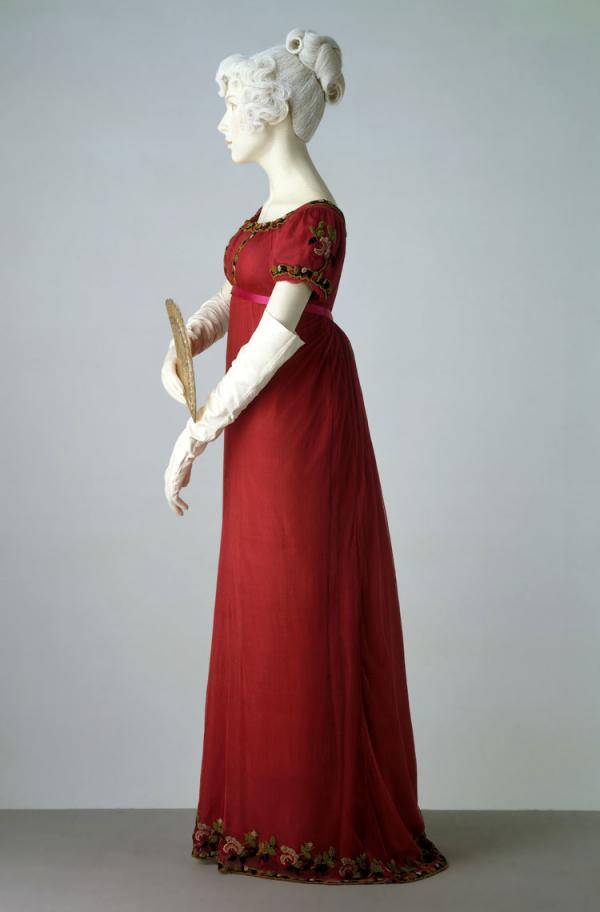 But what of Mr Darcy? This beautifully-preserved suit with its colourful embroidery – intended to be worn at court – is perhaps a little too cheerfully decorated for the famously stern hero: 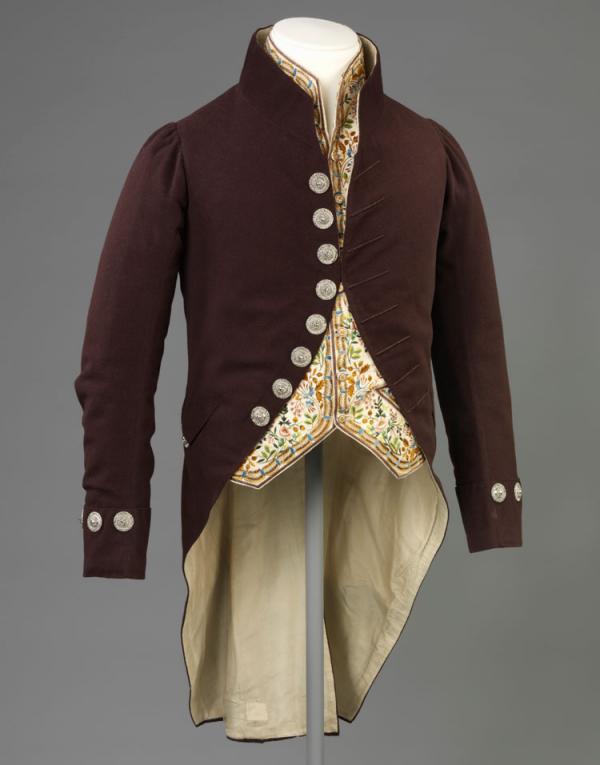 This sombre black suit however, intended for a middle class professional such as a cleric would certainly suit Elizabeth’s would-be fiancé Mr Collins: 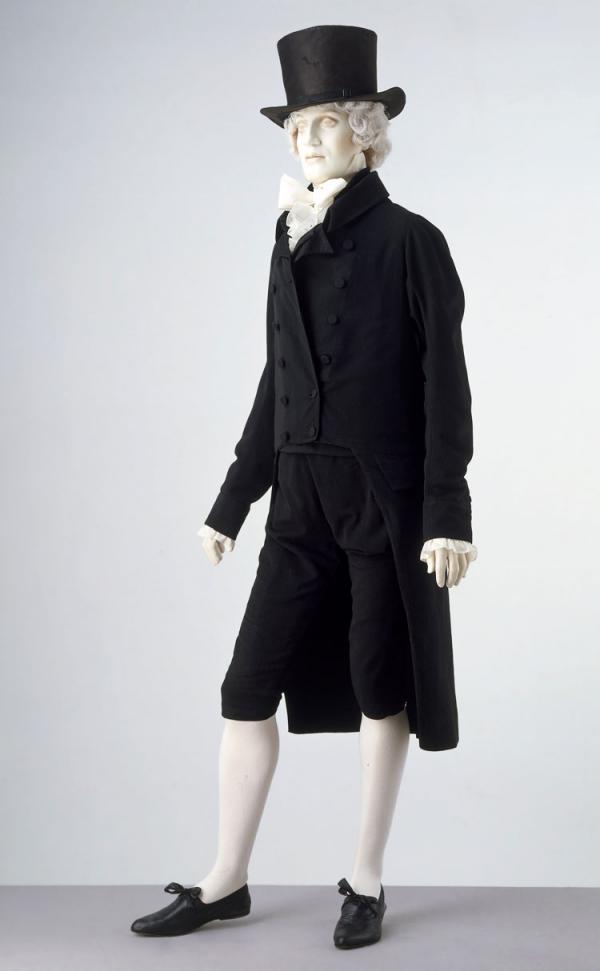 Pride and Prejudice is of course, a comedy of manners that satirises the early 19th-century social scene. Austen was not the only person at this time to poke fun at the marriage market and the restricted lives that young women were forced to lead: 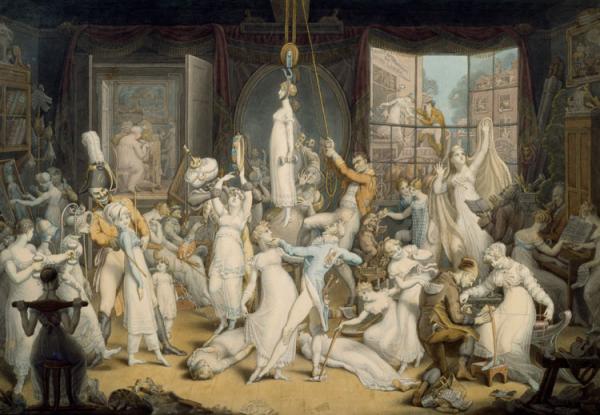 This satirical watercolour from about 1805 mocks the lessons in deportment and dress, music and dance that made up a young woman’s education, readying her to become a good wife. However, this education did not always have the intended outcome, and through the window at the back of the scene a young couple can be seen eloping – Lydia Bennet and Mr Wickham were clearly not unique.

More information about the fashions of the period can be found on the 18th-Century Fashion and 19th-Century  Fashion subject hubs, and in Search the Collections.

Pingback: Jane Austen boot cake – What do people do all day?