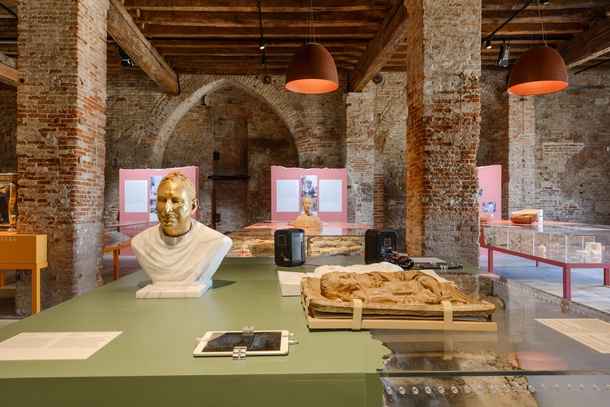 This year the V&A launched its first collaboration with the Venice Biennale, in the Applied Arts Pavilion located in the Arsenale. The exhibition, ‘A World of Fragile Parts’ curated by Brendan Cormier, explores the possibilities of preserving and disseminating cultural artefacts. It showcases a selection of projects that demonstrate the latest replication technologies, posing political questions about the copy.

The V&A’s history with the copy dates back to the 19th century, when the museum opened the Casting Courts housing plaster-casts and electrotypes of notable sculpture and architecture. At the time this collection was not unique, however during the 20th century copies fell out of vogue, resulting in their mass destruction. This plummet in the status of the copy, despite the accessibility that it offers, reflects Walter Benjamin’s claims in his 1936 essay, ‘The Work of Art in the Age of Mechanical Reproduction’, that only originals are valuable since they uniquely possess the ‘aura’ of the artwork.

Questions of authenticity are cast into sharp relief in ‘A World of Fragile Parts’. These are increasingly pressing given that some museums already offer scans of their objects which anyone can download to print in 3D. Even the willingness of the museum isn’t a limiting factor as artists Nora Al-Badri and Jan Nikolai Nelles demonstrate. They display ‘The Other Nefertiti’, a copy of the bust of Egyptian queen Nefertiti, having scanned the original in the Neues Museum in Berlin without permission – a new variant of the copy and art heist in one. It is also a political gesture given the bust’s contentious history, with Egypt continuing to demand its return.

This situation might be alarming to cultural institutions if Benjamin was mistaken, a concern the then-director Martin Roth raised when he questioned “could an abundance of copies do more to endanger our cultural heritage than protect it?”. However, the history of an object is important. This will be obvious to anyone who asks a child with a security blanket, or someone who owns a celebrity’s old sweater, whether they mind swapping it for an identical one. Originals matter. Although to make the leap from this that copies don’t matter would miss the point that ‘A World of Fragile Parts’ so successfully illustrates. Copying is a political matter, not least because of its fraught status in the history of art. It offers the possibility of circulating knowledge and preserving artifacts which are vulnerable, as is the case with ‘Material Speculation: ISIS’ by Morehshin Allahyari which replicates artefacts from Hatra and the Assyrian era which were destroyed by ISIS. While these objects don’t have the historical credentials of the originals, their form still offers precious insight into the past. Perhaps their new histories – with their embedded USB sticks containing information about the artist’s reconstruction of them – will also become highly valued.

The act of copying also raises the question: what should we copy? Should the focus be on the most fragile and endangered works? What we deem the most important? Quantity or quality? Even amongst the projects on show there is no consensus. The exhibition leaves these contemplations to the viewer by offering an eclectic mix of copies from refugee camps to bomb clouds. It ‘reports from the front’, as this year’s director of the Biennale Alejandro Aravena calls contributors to do, of technical innovation and political upheaval to examine the role of today’s museums.