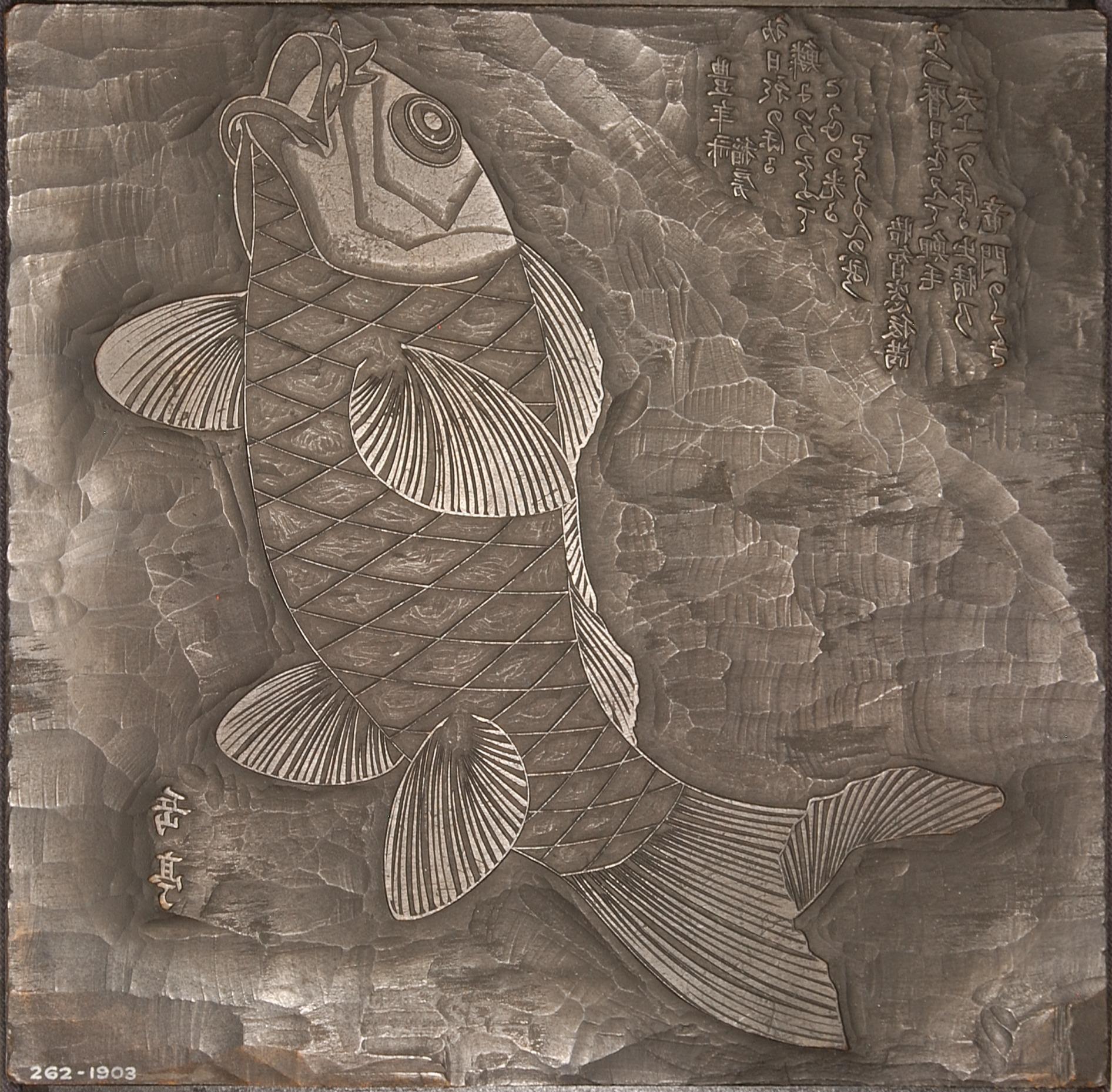 A Japanese woodblock was chosen as the inspiration for a new Teacup Travels episode on Cbeebies. Teacup Travels is historical fiction for young children incorporating genuine historical artefacts into dramatic adventure stories. It is on display at the V&A South Kensington site in Japan, Room 45, Case 13 for one more week only, until Sunday 21 May.

For this episode the V&A’s senior curator Rupert Faulkner worked with the makers of Teacup Travels (Plum Films) to recreate the Carp Print Block from Edo period of Japan. Painstakingly re-made by Plum Films’ highly experienced and skilled prop-maker, the sixth episode of series two was inspired by this object from the collection at The Victoria & Albert Museum.

In January, families took part in a printing workshop inspired by the Leaping carp printing block from 1830-35. As carp often swim upstream, they are associated in Japan with perseverance and hard work. In this all-day drop-in workshop, families explored the Museum for animals and their meanings, created their own block print design and experimented with printing techniques.

Visit the Museum this weekend to see this inspirational woodblock before it comes off display, and then search the Museum for more symbolic animals. There are plenty of other animals to find in the galleries on level 1, but also in the wonderful Ceramics galleries on Level 6.

Imagine if every time you went to see your Great Aunt on your way home from school she sent you off on an adventure back into the mists of time. Imagine if you were so bold as to ask her age she’d tell you she was four thousand years old. So it is for Charlotte.

In season two she takes turns with her cousin Lokesh to visit Great Aunt Lizzie in her curious house full of treasures. All they have to do is choose from one of hundred mysterious painted cups and listen to Lizzie tell its tale, and wheels of time begin to turn backwards. But which cup will they choose? Each one is alike except for the strange picture on its side.

Sipping tea, they listen as Lizzie spins another yarn. Her words are so enchanting they can’t help imagining themselves long ago and far away. And as their imaginations take flight, the ancient world springs to life in storybook colours and Charlotte and Lokesh stride out into the world as it used to be. Following in Great Aunt Lizzie’s footsteps among the temples of Ancient Greece, the mountains of Edo Japan, the watery world of the Vikings and the forgotten cities of the Mayan Empire they run into hapless aristocrats, meditating monks, bumptious warriors and old retired hunters selling street food.

But can Great Aunt Lizzie really be four thousand years old? Who could dare disagree when wrapped into every single story is a real museum piece just waiting to be discovered.

Sit yourself down with cup of something good and join the next expedition.