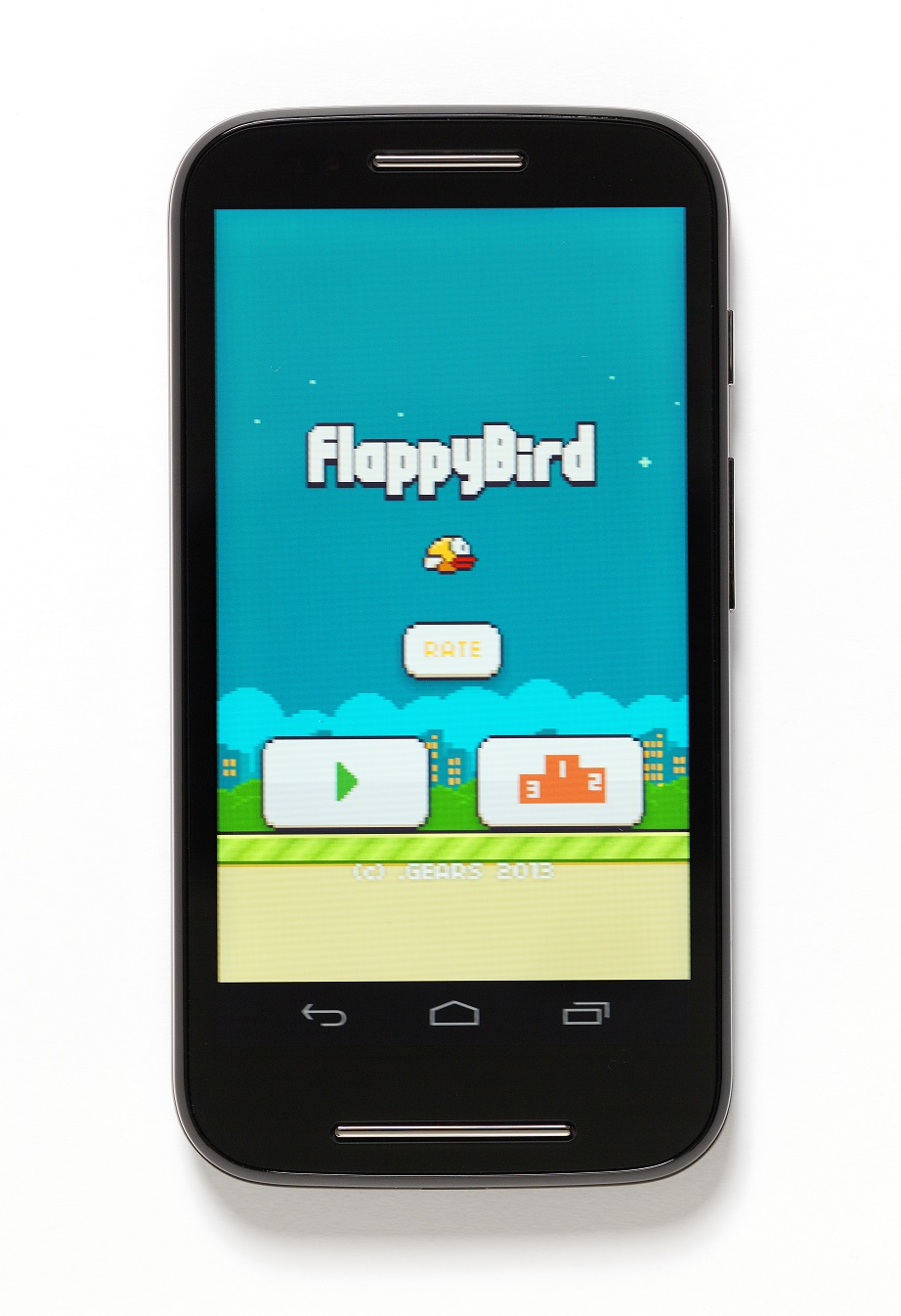 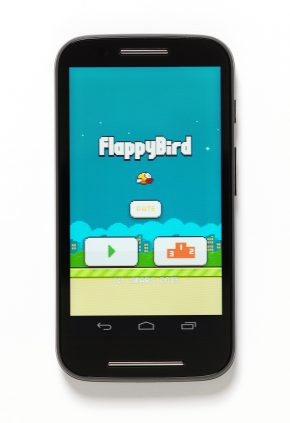 As part of the V&A’s new Rapid Response Collecting strategy, the Contemporary Architecture, Digital and Design team has collected the museum’s first app, Flappy Bird. A simple side-scrolling video game with 2D retro-style graphics, the player controls a bird attempting to fly through rows of green pipes, avoiding contact with them by tapping the phone’s touch screen. It sounds easy enough, but if you’ve ever tried playing it you’ll know this isn’t the case.

Why would a museum such as the V&A collect apps? Apps are clearly a significant part of contemporary culture. As of June 2014, there were 1,200,000 apps each on the Google Play store and Apple App Store, and 50 billion downloads have been made from Google Play and over 75 billion from the App Store. Looking at statistics such as these you can see how choosing the inaugural app to download to the museum’s permanent collection has been a challenge, and also how important it is that the museum represents examples of these ephemeral items. The department decided on Flappy Bird when it came to the world’s attention having received over 50 million downloads, reflecting the medium’s success, its global reach (the game is from a Vietnamese studio) and as an artefact of digital design experienced by people in their everyday lives.

From offensive tweets to violent videos on YouTube, Flappy Bird is famously frustrating – you may well have been one of the many millions of Flappy Bird players infuriated by its extreme difficulty! Nevertheless, it is this gameplay that made it a massive viral sensation. Flappy Bird follows to an extreme the mantra known as Bushnell’s Law. Named after the creator of Pong and founder of Atari, the rule says that games should be “easy to learn and difficult to master”. Its opening screen features one instruction – “TAP” – and from the moment you do, the game starts. If you stop tapping, you die. If you hit a pipe, you die. Simple, but hugely difficult in practice. It follows Bushnell’s Law to such an extent that it could be considered part of the theoretical masocore genre, a portmanteau of masochist and hardcore used to describe games with extreme difficulty that rely on specific player techniques. The player control in the game is particularly characteristic of masocore, testing the player’s reactions as they have to tap the screen at exactly the right time to continue, in a technique known as twitch gameplay, describing the successful players’ sudden finger movements.

Flappy Bird’s graphics and gameplay place it in the realm of retrogaming culture – the subculture of playing video games designed by games console manufacturers from the mid 1970s-1990s including Atari, Sega and Nintendo, before the 5th generation of modern video game consoles took off with Sony’s first PlayStation in 1994. These machines had limited graphic and sound capabilities and it is these limitations in colour palette, resolution and memory that are applied by programmers to ‘modern retro’ games such as Flappy Bird. Today this is a prevalent design movement in the culture of independent video game development, designed without the financial support of a video game publisher. Dong Nguyen’s .gears studio, the one-man company behind Flappy Bird, is a prime example of this kind of set up. The rise of the smartphone has exponentially increased opportunities to create and expose these kind of games to a large audience.

The Flappy Bird app was first released in the Apple App Store on May 24, 2013, and languished in relative obscurity until October 29, 2013, when it climbed into the Family charts, at 1469th place. On 4 November the game received its first notice on Twitter (other than tweets posted by the designer, Nguyen), from @alexisbaskervil, which simply read “F*ck Flappy Bird”, emblematic of the reviews, tweets and commentary that would build around this game as it soared up the charts over the next few months. On Dec 3 it entered the overall App Store charts, at 1308 and by Dec 13 had reached the top 250 free apps in the USA app charts. It was around this time that Twitter users started to post graphics, memes and YouTube videos heeding their rage when playing it. The game’s difficulty had given it viral status and it reached number one in the US App Store on Jan 17, with Nguyen adding the Android version to the Google Play store (the version that we have acquired) on January 22nd.

As of January 25, tweets with the phrase “Flappy Bird” passed the 500,000 a day mark, becoming the number one free game in the App store of 53 countries by February 1st 2014. Soon after, Nguyen revealed he was making $50,000 a day from advertising; this disclosure led to increased backlash regarding not only the gameplay, but also the issue of the similarity of the graphic art to Nintendo games of the 1980s. Nguyen began receiving not only repeated requests from the global press to interview him about the game, but also hate tweets, death threats and harassment over it. He announced on Twitter on 8 Feb 2014 that he would shortly remove it from the App and Play stores and duly did, on February 9th. Immediately, very similar games and copies appeared on both stores, and phones with the game already installed were sold on eBay at highly inflated prices – including one that reached $99,900. An analysis of eBay sales by the Economist, on February 10 2014, showed that on average mobile devices featuring Flappy Bird earned twice as much as devices without.

Luckily the V&A didn’t have to pay $100,000 dollars for our copy, as, after much investigation, we managed to contact Dong Nguyen who gave us permission to collect a copy (from one of our colleagues) for the nation. However, having made this successful acquisition, the museum must now face the long term challenge of collecting apps. Designed for specific operating systems and played on specific examples of technologies, how do museums keep these in perpetuity? The mobile phone currently used to display Flappy Bird will one day fail to work – how will we access it after this? Questions of authenticity are raised when the solution of emulation is suggested; if it can’t be played on the original hardware, how can the experience of playing it be the same? Solutions so far investigated by museums worldwide include collecting the source code as a preservation tool, or recording and collecting audience experience alongside the artefact. In the long term, the museum needs to demonstrate tangible proof of these digital objects within the collection – alongside the digital file, we have a recording of the game in progress and material representing the viral output (YouTube videos in standard video formats and printed tweets). These examples of the global response to the game may one day come to represent its original incarnation in the collection.

Flappy Bird is currently on display as part of Rapid Response Collecting in gallery 74A, and Nguyen has promised that Flappy Bird will return.

WOW… I dont care about anything else related to games… but, happy to know that bird related games are growing this days… BTW I am from Pest Control Company… :) ha ha ha

Flappy Bird had the potential to grow so much more but instead it was taken down from App Stores. But yea obviously the developer felt it as a responsibility so its okay.

Thanks for sharing with us,
You have really shared the nice post here.

I really like bird games. They are really well games to play and get your mind fresh.

This is really a good post. I like the way you shared this information. Thank you so much.