dr.d (doctored or subverted) is an artist best known for altering and augmenting billboards. On one level the motivation is simply to disrupt the outpourings of commercial advertisers and provide people with something more stimulating in the visual environment. For many this is a welcome intervention. An email quoted as a testimonial on dr.d’s website describes how an altered billboard in Hackney “made me laugh so much that I snorted coffee out of my nose when I saw it on my way to work”. This dr. d states is what makes it all worth while.

Often however dr. d’s work makes a specific political protest. The first time I encountered dr. d was two years ago when a colleague came into the office one morning with this image on her mobile phone. 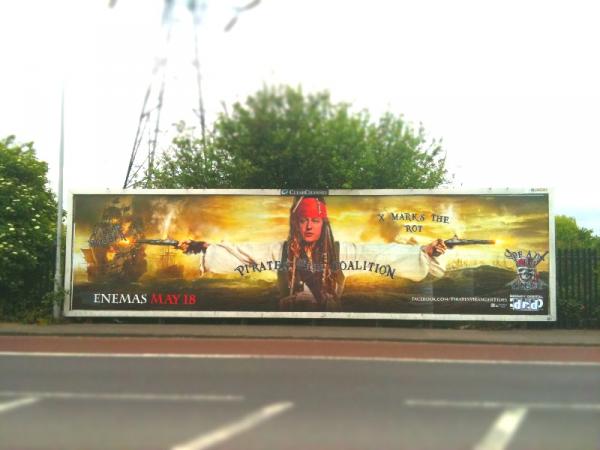 Johnny Depp’s face on a Pirates of the Caribbean film poster had been skilfully replaced by that of Prime Minister David Cameron and the title of the famous film franchise adjusted to read ‘Pirates of the Coalition’. By the next morning when she passed the billboard again, the doctored poster has already been replaced,  but not before many people had captured it and shared it online.

Recently dr.d and journalist/filmmaker Leah Borromeo have been experimenting with a different urban surface for spreading protest messages: London’s Regent Canal. This time the subject raised was the erosion of the Welfare State. Drifting down the waterway past Broadway Market last weekend was a giant envelope stamped ‘Royal Sale’, a mattress labelled ‘Bedroom Tax’ (with several plastic dolls and mannequins clinging on for dear life), and a polystyrene disc emblazoned with ‘National Wealth Service’. 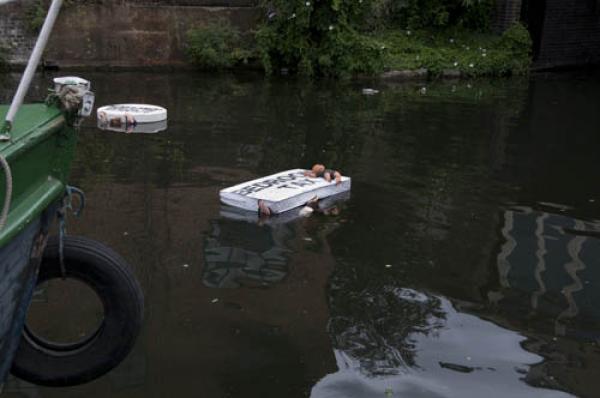 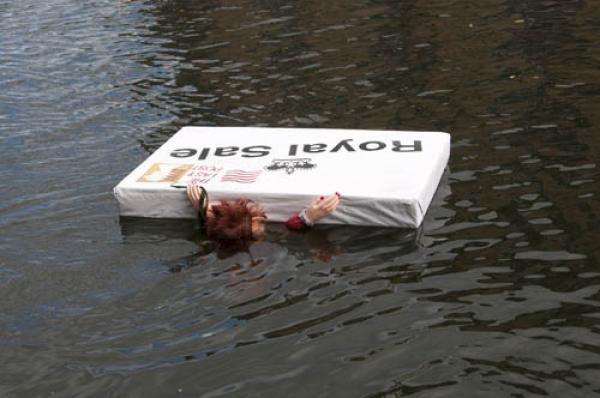 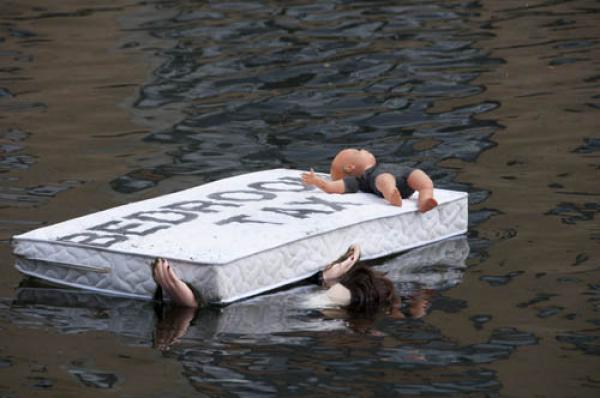 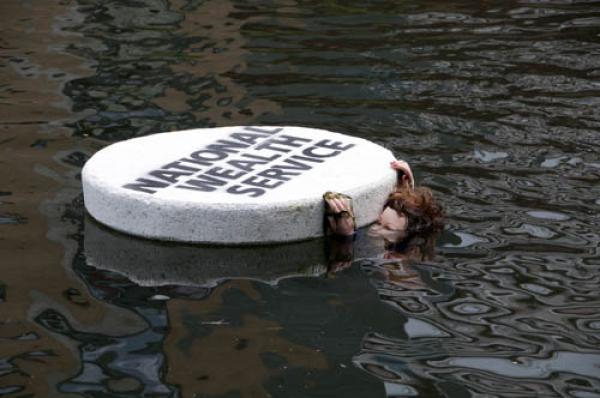 This creative floating protest called several metaphors to mind – the detritus of a sinking ship; the Welfare State sold down the river and so on. dr.d and Borromeo say the imagery of the piece is “ meant to be ambiguous. Are people drowning, are they clinging on for dear life, are they trying to save something?”

The half submerged figures are also a reference to duo’s darkly tongue in cheek #Wealthfair project, which takes up a satirical device used in Jonathan Swift’s essay ‘A Modest Proposal’ (1739). Where Swift suggested that the Irish could alleviate their economic plight by selling their children for food, #Wealthfair proposes that people could commit suicide in order to ease the burden on the Welfare State. Not shy of bad taste, They explain idea and the politics behind it:

“The idea came about through a dark joke one of us cracked about austerity cuts – and wondering if anyone would notice if a load of people killed themselves because of them. Since we started making the models, people have. So we decided to tackle this tragedy head on and head into spaces people aren’t usually prepared to tread. Suicide isn’t funny…but neither are the states of mental health people are pushed into through desperation. The government doesn’t understand that every time they push forward with another callous private enterprise, they are chipping away at the collective mental health of the country…and our sense of community. Nix that. They fully understand that is what they are doing. That is exactly what they want.”

Please note the the images used in this blog post are not V&A Images and are copyright of the photographers.