Locking-on is a strategy that featured in the Disobedient Objects exhibition. Here we bring you an update on the technique following last year’s action by Plane Stupid  at Heathrow Airport in opposition to a proposed third runway.

The tactic of using your body as a blockade has a long political history in acts of non-violent direct action. In 1989 during huge forest protection blockades in Coolangubra, Australia, activists developed objects that thwarted the police in forcibly removing people from the blockades. These included lock-on arm tubes (difficult and slow to cut through without injuring the person inside) and tripods with a person sat a-top (who would fall if any of legs are removed). Since then these designs have spread globally as a popular and effective tool of non-violent direct action. And as police forces have developed specialised removal teams, the designs have evolved to out-wit them. Locking-on is therefore a dynamic and constantly changing technique allowing activists stay one step ahead of the authorities.

In July last year the climate group Plane Stupid used an innovate combination of lock-on elements to occupy and shut down the northern runaway at Heathrow for six hours (stopping 25 flights). Locking-on is physically taxing and can have serious legal consequences. In February the 13 members of Plane Stupid who took part in the Heathrow action were convicted of aggravated trespass and narrowly escaped jail terms. In this post one of the Heathrow 13 explains why they took action and how the lock-on worked. 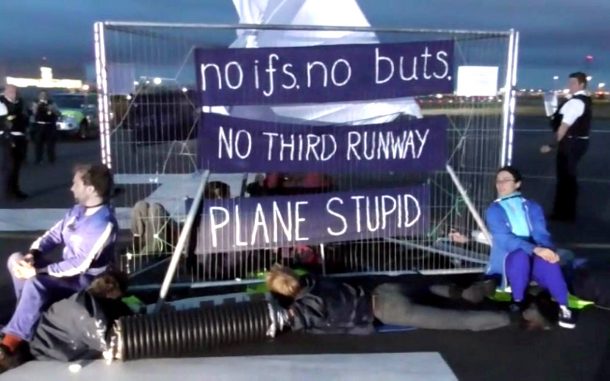 Aviation is the fastest growing source of carbon emissions, and there are no technologies on the horizon to clean it up, so the only way to limit aviation emissions is to limit flights. Heathrow is the world’s dirtiest airport, and there are plans to make it far worse by building a third runway. Plane Stupid decided to limit the flights from one of Heathrow’s existing runways, directly reducing emissions, and at the same time remind people of the threat the third runway poses to our climate. To be effective, we needed to stay on the runway for at least a few hours – a bit of a challenge when Heathrow has both its own police force and its own fire brigade. We used several of the activists’ favourite blockading techniques; a tripod, arm-locks, neck-locks, chains and a heras fencing cage – the latter being a bit of a Plane Stupid signature dish we’d previously used to bring Stansted to a standstill – but combined them in a manner where every bit of kit was connected to every other, with the tripod’s legs going through the fencing. 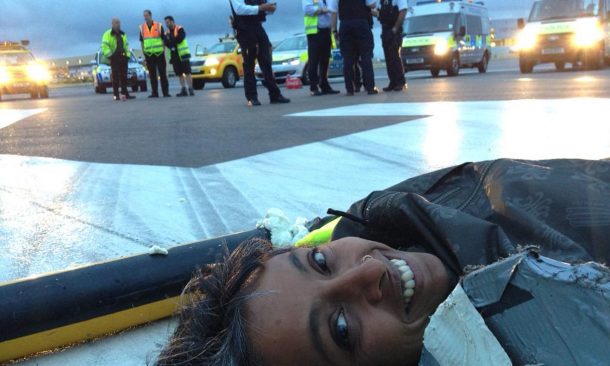 Getting onto the runway at 3.45am, 45 minutes before the first flight was due to land, was easier than we expected. We called the police as we walked across the grass, and they started turning up about a quarter of an hour later. The compound lock-on only takes a couple of minutes to erect, and so we were properly locked on long before they arrived. The cage allowed three of us relatively free movement, so we could do media work and try to keep the arm-lockers as comfortable as possible, with the assistance of the neck-lockers, who were outside the cage but had their arms free. The activist on top of the tripod was dressed as a polar bear, to make it clear that this was a climate action and not anything more dangerous. 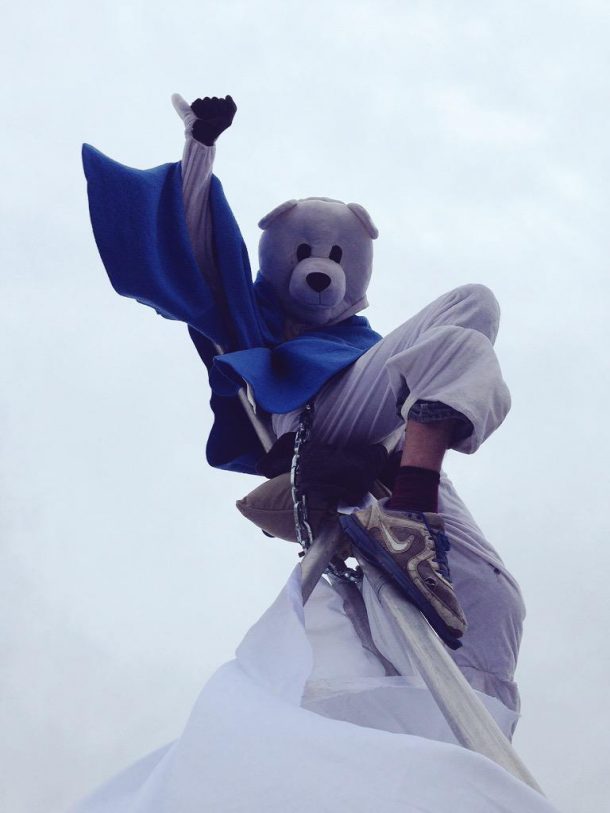 Everything went according to plan, and the specialist police extraction squad had to be called to remove us. They needed a couple of hours to study the compound lock-on to properly understand how cutting each part of the structure would affect the stability of every other part, and then they started cutting. In total it took six hours for them to remove all of us from the runway, with the multi-layered, composite arm-locks posing the greatest challenge for them. The variety of materials used, and the lips on the tubes which prevented them from seeing how the materials were layered, forced them to do most of the cutting with a pair of sharp scissors – power tools would have been disabled by melting rubber and glue. 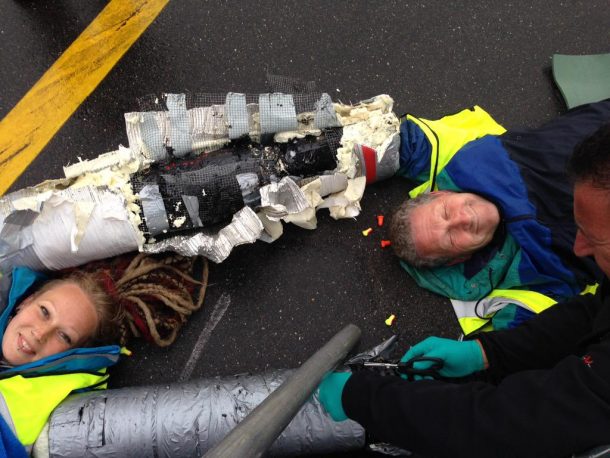 To see a video of the action click here.

Overall, twenty five flights were cancelled, which is a lot of pollution, and we managed to get our ‘no new runways’ message into the mainstream media on the day of the action, during the ensuing trial, and in the lead up to sentencing; a consequence of our judge hyping the whole thing up by threatening us with ‘immediate custodial sentences near the top of the range.’ We’ve been asked many times whether we’d do the same thing again. The answer is no, not exactly the same thing. We’re still learning.

Lock-on technology has often been shared through how-guides. In this tradition Plane Stupid are publishing a how-to for the Heathrow Lock-on designed by Barnbrook (the graphic designers for the Disobedient Objects exhibition). Click here to download the how-to 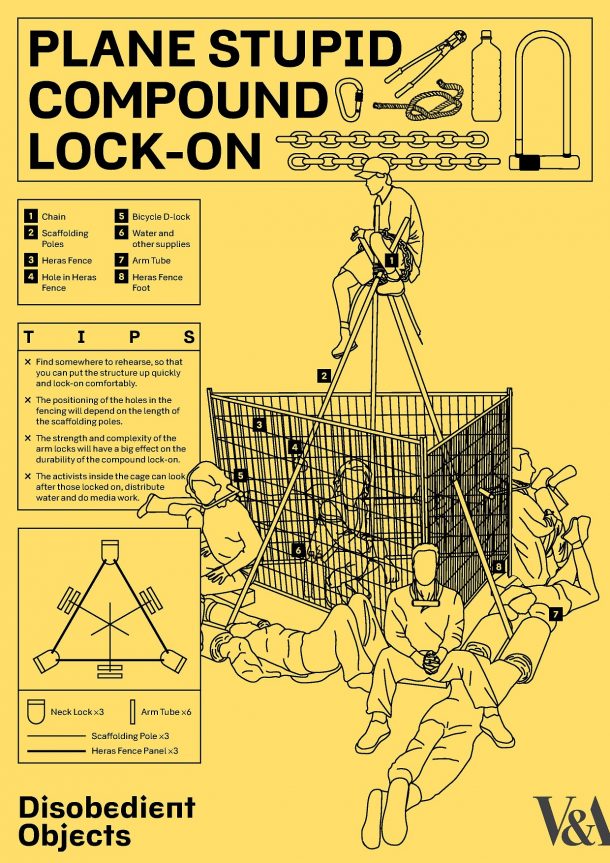 Brilliant. Catherine, I’ve been trying to reach you as I’m a professor at Yale organizing a symposium on “Aesthetic Activism.” I’d like to invite you to speak. If you see this can you contact me and I can provide you more details? Sorry your direct email address is not posted on the V&A website so I am resorting to posting on your blog with the hopes you see this… -Mark Gage (gage@mfga.com)