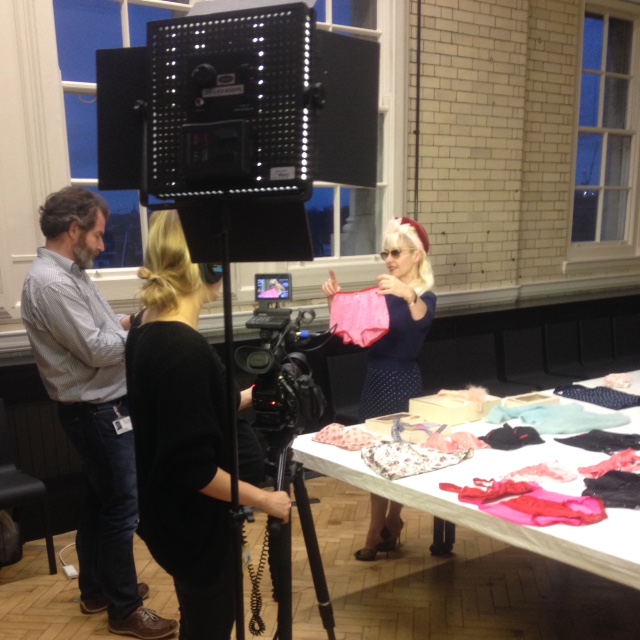 AV (= Audio Visual – so, this tends to mean film) material has become an expected feature in exhibition design. While we don’t want this material to distract from the objects themselves, film and sound can be a great way to further engage with visitors and add to the exhibition’s mood and atmosphere. With the inclusion of behind the scenes films, catwalk footage and interviews, AV can also give experts, designers and makers the opportunity to shed further light on objects, and explain designs in their own words. It brings other voices and personalities into an exhibition and, in doing so, perhaps makes it, and the designs on show, more ‘human’. Using AV material can be particularly key when working on a fashion exhibition, as it allows you to show the garments in the way they were designed to be worn and seen – on a real body, complementing the way the figure curves and moves.

With just under five months to go until ‘Undressed’ opens, we are in the midst of preparing some exciting AV. With that in mind, a very special visitor kindly came over from Paris to see us this week. Fifi Chachnil is a Parisian fashion designer whose atelier is based in the 1st arrondissement. While her brand celebrated its 30th anniversary last year, she officially began to design lingerie in 1996. Her work playfully flits between ideas of the seen and unseen, dressed and undressed, with her sheer Babyloos (her own interpretation of the playsuit) giving just a glimpse of satin trimmed bras and bloomers underneath. She came to see us in all her polka dot and leopard print glory on a grey December day to show us some classic pieces from her past and current collections.

As we met at the Clothworkers’ Centre, we also had a look at some beautiful pieces from our own collection. Fifi takes a lot of her inspiration from musicals, classic Hollywood glamour and 1950s fashion, and so it seemed appropriate to have some Dior, Lanvin and Givenchy from that period at the ready while we filmed. It was interesting to learn that Fifi keeps an archive of her own in Normandy, which creates both a record of her work and a further source of inspiration from which she can trace particular patterns in design and colour themes through the years.

The day was full of anecdotes and discussion while Fifi told us more about her work and inspirations.

There will be more on Fifi’s work, and the films we are making, in posts to come – and, of course, in the exhibition itself. For now, we just wanted to give you a little taste of the day and a sneak peek behind the scenes.

Love the blogs…so interesting to see and read about all the different elements of mounting the exhibition. How great to have Mme Fifi’s involvement. Am looking forward to seeing the finished work.

Lookimg forward to th next nlog.

Hi Deborah, thanks so much for your comment. Great to hear that you’re enjoying the blog. Yes, we’re very lucky to have Mme Chachnil on board!

Thank you! Just put a new post up, which should be followed by another at the end of the week. Hope you enjoy them!

This is surely a very good blog, thanks a lot for sharing such nice information here.