Though uncomfortable for us to look at, Jean Qui Pleure, like so many objects on display at the Museum of Childhood, forces us as viewers to do the necessary work of considering the darker side of the social and cultural history of childhood. This object is in some ways testament to the experience of schooling in the nineteenth century and as such brings to our attention the social perception of the less academically able or illiterate child in the period. Jean reminds us that harnessing the affective force of shame was a common disciplinary method in nineteenth and early twentieth century schools.

Representations of childhood in nineteenth century literature and visual culture imagine the child as a natural innocent to be sequestered away and defended from the corruption of the adult world. Following the publication of Jean-Jacques Rousseau’s influential work Emile (1762), pedagogical practice was encouraged to be mindful of the ways in which this corruption might be accidentally transferred to the innocent child.

The painting by Henriette Browne, on display here in the museum, participates in this romantic paradigm by representing the child at ease with her studies, appearing natural and peaceful. Jean, in contrast, reminds us that the lived experiences of children did not always match this cultural ideal. Jean is, then, performing the vital work of problematising the cultural fantasies which cluster around figures of childhood from the late eighteenth century to the present day by reminding us of the cruelty of disciplinary practices in nineteenth century schools. The uncanny qualities of automata work, to some extent, to collapse the distance between the human and the inhuman making them particularly effective tools for troubling the boundary between embodied experience and representation.

Any reading of Jean the automaton, however, has to take into account its original purpose as a toy for adults (which would have been used for the amusement of guests after a dinner party for example). The object is, therefore, an obvious caricature and as such cannot unproblematically ‘reveal’ the experience of schooling in the period any more than The Pet Goldfinch. Nevertheless, the fact that adults would have laughed at Jean’s struggle still disrupts a narrative that depends upon a particular sentimentalised version of childhood. By inviting a group of adults to laugh at a child’s struggle to read, the object is re-enacting the shaming that was the purpose of the “dunce hat” in the school room. Jean the automaton would have prompted certain behaviours in the observers, behaviours which reinforced and naturalised prejudices against less academically able children. Here in the museum today, however, he performs a very different role.

The tensions in the way this object speaks to the experience of illiteracy are too numerous to cover here in detail. For me this object is an important example of the disruptive potential of the material culture of/about childhood, the way it can demand that we scrutinise the bodily realities that subtend ideological discourses around “childhood”.

Though difficult to behold, today this object asks us think about our approach to reading: the ways in which we are all, to some extent, non-readers – half-comprehending and half-inventing narratives – and why we might now need to learn to read differently. 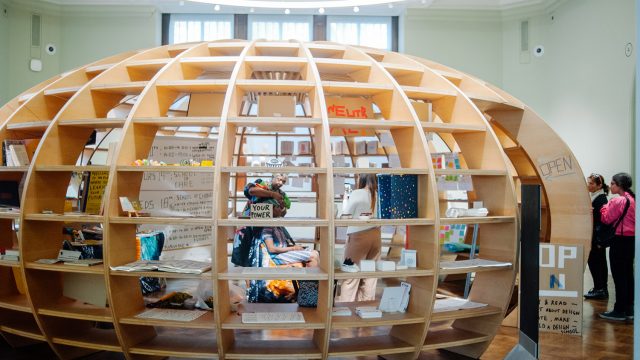