This June we have been celebrating the London Borough of Newham’s heritage with local communities through scientific and material investigations into the eighteenth-century Bow Porcelain Factory. Making East London Porcelain brings art and science together to explore how heritage science and re-making practices can help us better understand the places we live today.

This photo essay will share with you our investigations into this important part of our heritage.

Learning about the Bow Porcelain Factory I now know that Newham has a great history and that we are part of a global history Student, Harris Chobham Academy

For many centuries the skill and knowledge to make porcelain was only known to East Asian craftspeople. Their remarkable wares, known as ‘china’ by some Westerners, were traded across the world. From the 1680s, England dealt directly with Canton, China’s southernmost port, now Guangzhou.

In the early 18th century Europeans competed against each other to try to re-create porcelain. By the 1740s London-based scientists, artists and entrepreneurs had solved the secret. One of London’s first porcelain manufacturers was the Bow Porcelain Factory and its success reminds us that Newham was a global centre for experimentation and creativity during the middle of the 18th century. The Bow Porcelain Factory was often referred to as ‘New Canton’ as the large team of factory workers tried to compete with the global ceramics trade in factory situated on the banks of the River Lea, just off Stratford High Street.

They produced porcelain goods ranging from functional teacups and pickle trays to ornamental figures and decorative vases painted with Chinese designs. In an early newspaper advertisement in 1747 they described their products as ‘Bow China. Great variety of useful and ornamental China’.

The London Borough of Newham has a collection of over 140 artefacts of Bow Porcelain. This year, scientists from the V&A and the Ashmolean Museum have been analysing 15 of these objects, so we can understand the experimental technology and science that these early London porcelain-makers developed.

Without science art cannot be successful

The results of the scientific analysis alongside historical research and material testing helped us to develop two recipes so we could make our own porcelain. The patent created on 6 December 1744 by Bow Porcelain relied on a white clay mined by the Cherokee nation in North Carolina, a form of kaolinite. No objects are known from this period, so we couldn’t analyse them. This is the recipe we have created based on the information given in the historic patent:

The second Bow ‘New Canton’ patent from 1749 describes the innovative use of calcined bone ash (calcium phosphate) as a flux, which they called “virgin earth”. They were the first English manufacturer to use bone ash, an important precedent for what is sometimes called ‘Bone China’ that you might still use in your kitchen today. We remade their recipe based on the scientific analysis conducted on the London Borough of Newham objects:

(Optional: add 0.05g cobalt oxide to the mixture, giving it a ‘mushroom’ tone)

We can’t change our past, so it’s important that we talk about it

At a visit to the V&A, the students also spent time handling these objects and learning about their history. These artefacts raise important questions about Britain’s role as a coloniser and global consumer. They spent time examining a bowl that was designed for sugar which has a representation of Africa in the form of a woman. Sugar was produced by enslaved people forcibly taken from Africa by British slavers and other European colonial powers who profited from this. Bowls like this would have sat on the table during dinner in wealthy homes in Britain.

They also spent time in the V&A lab, using an XRF spectroscopy machine and digital microscope.

We also visited their school where they created historic glaze recipes and planned our exhibition at Stratford Library. Alongside discussing the science of making porcelain and Newham’s global links, they wanted to draw audiences’ attention to celebrity culture and ceramics. Focusing on a Bow Porcelain figure of a boxer, they researched historic boxing celebrities such as the first Black boxer in Britain William Richmond who inspired the character Will Mondrich in the Netflix series Bridgerton ? The students wanted visitors to the exhibition to ask themselves: “Who was the boxer? What kind of person was he? Who was he interacting with?”

The exhibition was on display from 1-30 June as part of the programming for Newham Heritage Month. One of the enduring messages from the students was:

Throughout this process, we were supported by three students on the V&A and RCA MA in the History of Design: Alice Conibere, Cate McCowin and Grace Santry. Here they are turning their skills to installing the exhibition!

The exhibition also showcased a new commission inspired by Bow Porcelain Factory, created by Maria Dragoi and Astrid Walker, which explored the history of unaker. 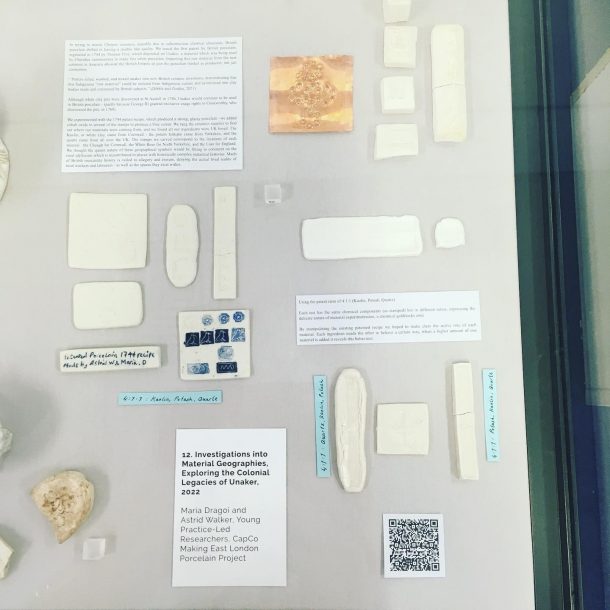 Visitors were also able to handle the Bow Porcelain objects.

Three hands-on workshops that took place at Cody Dock, a charity dedicated to the community-led regeneration of a former working dock on the River Lea. At these workshops, participants mixed their own versions of the two Bow Porcelain Factory patented recipes. 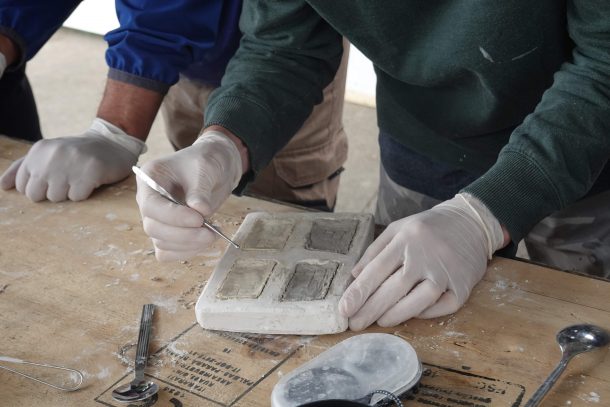 And also tried their hand at re-making the Bow Porcelain Factory lion sculptures.

Making East London Porcelain has been born out of the V&A Research Institute (VARI) research project ‘Experimentation and Placemaking: connecting communities with the technological and innovation histories of London’s early porcelain Manufacturers’ which has been made possible by the Arts and Humanities Research Council’s (AHRC) Capability for Collections Fund and support from Newham Heritage Month. This project was conceived by Dr Lucia Burgio, Dr Kelly Domoney, Dr Georgia Haseldine and Dr Caroline McCaffrey-Howarth

Special thanks to Adrita, Alina, Aryan, Bushra, Hairat, Happiness, Isaac, Maria and Nitush, who are all 6th-form students at Harris Academy Chobham, and their teacher Jennie Stephens.

Made at New Canton: Bow Porcelain from the Collection of the London Borough of Newham by Anton Gabeszewicz

STEP Interns – Where are they now?