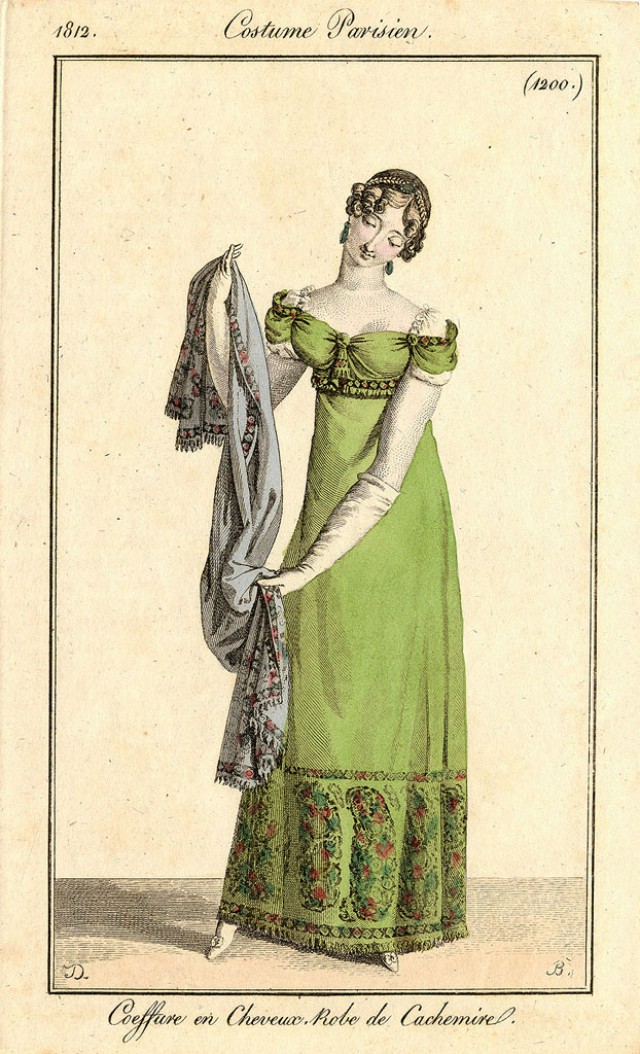 First I’d like to thank the wonderful guest bloggers we had over the past few months who have done a fantastic job of sharing their expertise and insight with us. We hope you’ve been enjoying these blogs posts as well. If so, you’ll be happy to hear we’ve enlisted even more amazing people to post in the next few months, on everything from heavy Portuguese quilts to transparent muslin dresses. Keep an eye out for them!

This week though I’d like to focus on a research aspect of the show; namely, the hunt for ‘contextual images’. Contextual images are images of photographs, paintings, drawings, or anything else that gives context to the objects you are looking at. They often appear on object labels, and tell you something about how that object was made or used.

We have dozens of contextual images in The Fabric of India, from miniature paintings to catwalk photography, and we hope they’ll make the objects even more intriguing for you. But the images you can expect to see in the show are only a very, very small selection of all the ones we found and considered.

Over the past year, I’ve been trying to track down any and all images related to the objects in the show – whether royal crowns or gamcha cloths. The result is a massive folder of images which, if nothing else, has the makings of a spectacular Pinterest board. In the course of this research, I came across some amazing things, not all of which ended up being chosen. So today I’d like to share some of my favourite rejects with you.

For the objects in the exhibition that represent the relationship between Indian textiles and European fashion, I searched for clear depictions of Coromandel Coast chintzes, Kashmir shawls and Bengali muslins in European paintings and prints from the 1600s through 1900s.

In particular, I spent perhaps rather more time than strictly necessary looking through early-19th century French fashion plates. Officially, I was looking for a muslin dress paired with a Kashmir shawl. With the invaluable aid of Jenny Lister, the V&A’s curator of 19th century fashion, I did indeed find plenty of examples of both muslins and shawls. Surprisingly, however, they were not always used in quite the ways I had expected to find them.

For instance, the 1812 Costume Parisien plate above shows how the fashionable early-19th century woman could creatively adapt a Kashmir shawl into a dress, a style likely popularized by Empress Josephine’s pioneering fashion prowess. Of course, one would need twice the number of shawls – and have to be sure they complimented one another other – but no one ever said fashion is easy (or cheap!).

In fact, it can be downright dangerous. The poor woman in the 1812 fashion plate below is quite literally up to her ears in frills. One worries about her suffocating, never mind crossing the road safely. Thankfully, she has a lovely Kashmir shawl to give her ensemble that perfect finishing touch.

Later in the autumn, look out for a guest post from Jenny Lister giving you more insight into these fabulous (and sometimes frilly) early-19th century fashions and their reliance on Indian textiles.

Another aspect of Indian trade textiles I found particularly interesting to research was the once roaring Indian bandannas industry (from the Hindi bandhana, to tie). Handkerchiefs from India once reached every corner of the world, and we have a whole case devoted to the varieties of, and markets for, these handkerchiefs in the exhibition. I found that once I started looking for contextual images for these objects they seemed to suddenly be popping up everywhere. For example, here is one dropping from the famous hand of Timothy Matlack, the American revolutionary who engrossed the Declaration of Independence.

One hundred and thirteen years later, a probably industrially-printed descendant of the handmade Indian bandanna can be seen wrapped around the head of a Cree man from Saskatchewan.

The story of the Indian handkerchief and how it evolved into the bandannas we know today is an amazing one, touching cultures around the world. Beyond the exhibition, you can read more about the story in an upcoming issue of Selvedge  or, of course, in the wonderful Tie-Dyed Textiles of India.

Of course, I have spent most of my image-researching time looking for images from India, specifically for pictures showing how textiles were used. For these I scoured the British Library’s catalogue of late 19th century photographs. I love the ones below not only for the textiles they show off – like the shawl and the brocade coat in the picture below – but also for the personalities that shine through.

Finally though, it is pictures of processes that can sometimes be most valuable when studying textiles. There are many textile techniques that were practiced in India which we still don’t know the whole making processes of, never mind the identities of the people who practiced them. Pictures like the ones below are like flashes of insight into these past industries and the people who participated in them.

I’ll leave you with one more, this time a little more recent. A beautiful and creative way of displaying sarees, from Raw Mango. If only there was room in my flat for such a set-up…

There’s a small peek into our research files – let us know if you want more, and I’ll scrounge up a part two. In the meantime, happy weekend!