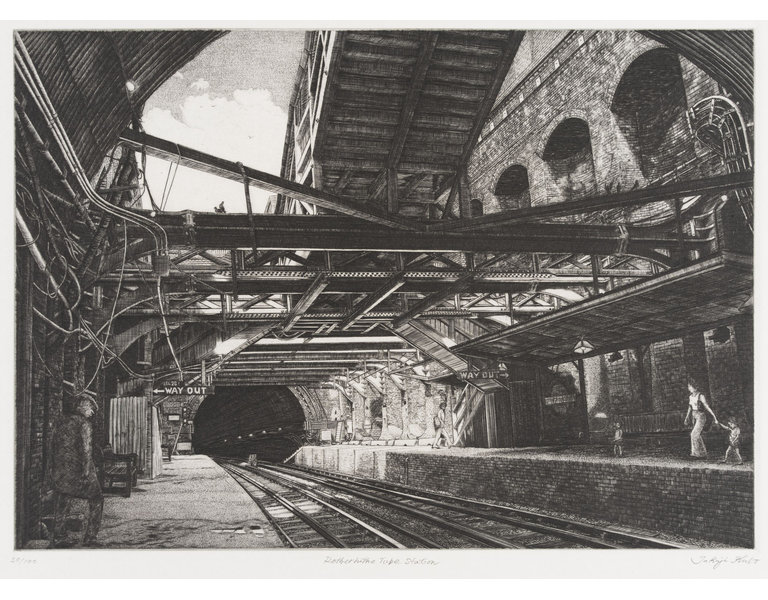 “We know no one very well, but we come into contact with an infinite number of people; we stay nowhere very long, but we see many, many places”.

When the first lockdown began in March, I imagined that my commute to and from the museum on the Underground was one aspect of normality I wouldn’t miss. It’s never exactly been a highlight of the day. Wedged into a rush hour tube carriage cheek-to-sweaty-armpit with total strangers, someone else’s smartphone jabbed in your shoulder-blade, the Underground can feel as hellish as any mythical underworld. Yet, as weeks and then months went by without passing through the ticket barriers, I did find myself missing some of the subtler qualities of riding public transport. The opportunity to put my brain in idle and indulge in people-watching. The panoply of different faces, styles, and languages. The peculiar peace that comes from being in public and being anonymous. The rush of air in your face as the train approaches in the tunnel. The sense of immersion in the city. Perhaps most of all, the simple feeling of being on the move that I took for granted before the pandemic.

Whether you love or hate the Underground (or love to hate it), it has always felt like a certainty of London life. The images of deserted platforms and carriages are unnerving because they call into question the whole idea of the city as we know it. The construction of the Underground lines, which began in the mid-19th century, transformed London into a city based on mass mobility. As a relatively cheap form of transport available to all classes (advertised as ‘The Way for All’), it had a far-reaching social impact. People had more choice where to live and work. The poor were able to leave the squalor of the inner-city for better housing further out. Suburbs were born and the centre of the city was opened up (especially for women) as a place for recreation, shopping and culture.

In the early 20th century, the designed environment of the Underground embodied the ideal of people moving freely and seamlessly through the city. Much of this extraordinary modernist vision is still visible. In Charles Holden’s streamlined stations for example (futuristic Southgate is a particular favourite). Or the elegant sans-serif typeface created by Edward Johnston in 1916, inspired by the crisp-cut letters of Trajan’s Column and designed to be legible on the move. And, of course, the famous map drawn by Harry Beck that laid out the tangle of Underground lines in the rational form of an electrical circuit. A less tangible heritage lies in the behaviours we all internalise (minding the gap, standing to the right on escalators, etc.) that keep everything flowing as frictionlessly as possible.

As the eminent urbanist Richard Sennet has pointed out, however, this mobility came at the cost of creating a more disaggregated, and ultimately less public city. In Flesh and Stone he describes how the London Underground established a new time geography for the urban centre. It acted in his words as the ‘veins and arteries’ through which the ‘human blood’ flowed into the heart of the city by day and drained away by night. Nor was the daytime mixing of people a matter of strong human connections. “People worked and shopped and then left for home”. Cocooned in carriages speeding underground, passengers travelled like ships passing in the night.

It strikes me that the language of the pandemic highlights this paradox at the heart of mass transport. In terms of COVID risk, a packed tube carriage is the antithesis of social distancing; an environment where we’ve learned to suspend our sense of personal space. But while we squish up close with fellow passengers, social interaction is minimal. We distance ourselves mentally, retreating into our own individual bubbles; touching but not connecting; sharing germs more easily than making eye contact or starting a conversation.

I’m reminded how in 1999, a group of ‘anarchitects’ called the Space Hijackers, challenged this state of affairs by holding a ‘Circle Line Party’ that involved transforming a Circle Line train into a pop-up moving disco. Sound systems, refreshments and even coloured gels to fix over the strip lights were smuggled aboard in suitcases. It was the first of many acts of ‘tactical frivolity’ through which the Space Hijackers pursued their mission “to save our cities from urban planners, architects and multi-nationals.” The idea was to creatively repurpose the dead, highly controlled public spaces shaped by institutions and corporations, and to challenge the hierarchies they entrench. (Why, for example, are corporate advertisers permitted to solicit us on the Underground, while beggars are not?). In this respect, the Underground could be considered a prototype of the ‘non-places’ of consumer capitalism. Places such as shopping malls and airports that are only a mirage of the organic street culture that Jane Jacobs famously argued is the essence of a living, vibrant city.

Emergency bailouts and new health and safety protocols have kept Underground trains and London buses running throughout the pandemic for those unable to shelter at home. But the crisis has exposed the vulnerability of the system. As of 2015, London is one of the only cities in the world that receives no government grant towards the operating costs of its public transport network, leaving an essential service heavily dependent on revenue from fares. Failure to safeguard the transport system around which London has grown would both exacerbate existing social inequalities and increase the use of cars.

At the same time, there has been much said about how the pandemic pushes us to question situations we accept as normal. One idea that has gained attention in recent months as our lives have become more local is the ’15-minute city’. This is an approach to planning developed by urban scientist Carlos Moreno that re-envisions the city as a series of overlapping neighbourhoods in which most of your needs (work, shopping, healthcare, education, leisure, culture) are met within a 15-minute walk or bike ride from your front door. It’s a notion that pushes against over 100 years of planning that has favoured centralising infrastructures such as the Underground, and the zoning of cities according to separate activities.

In an era of post-COVID recovery, however, re-orientating cities around the principle of micro-mobility could have a host of benefits: stronger communities; resilient local economies; less time, stress and carbon emissions expended on daily travel; a more equitable distribution of amenities; as well as increased opportunity for people to co-create their neighbourhoods at grassroots level. In some places the goal of a 15-minute city is already being boldly embraced. Earlier this year, Paris mayor Anna Hidalgo made it central to her successful re-election campaign.

Rather than reminiscing on the passive pleasures and frustrations of commuting, maybe it’s time to consider how we might design and inhabit the city in ways that are healthier in every sense.

‘Beyond the Pandemic: The Prospect of a 15 Minute City’, Camden Town Unlimited and Euston Town, Medium, 21 August 2020

Richard Sennett, Flesh and Stone: The Body and the City in Western Civilization,. W. Norton Company, 1996.