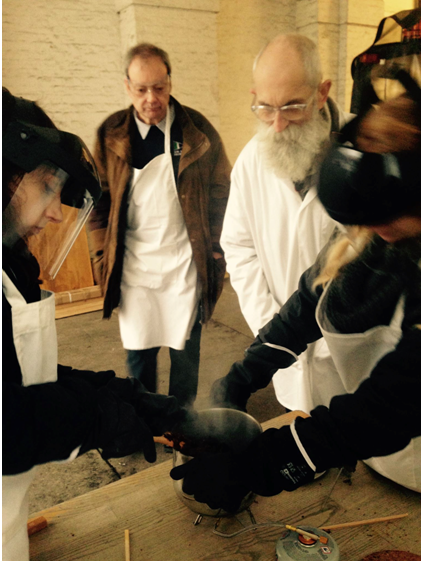 This post was written by second-year student, Melissa Tyler, one of a group of V&A/RCA History of Design MA students participating in the ‘Thinking and Experiencing Techne’ seminar/lab.

On a cold, blustery February morning we arrived at Blythe House, home to one of the largest storage facilities of the Victoria and Albert Museum. We were joined by senior furniture conservators, Nigel Bamforth and Dana Melchar, and furniture curator Nick Humphrey. In the preceding weeks, we had analysed the history of early modern technical treatises and recipe books to gain a better understanding of how knowledge was stored and transferred by fifteenth- and sixteenth-century makers and designers. Now our task was to interpret a recipe for an amber and linseed oil varnish given in an untitled sixteenth-century French manuscript, now in the Bibliothèque Nationale in Paris.

The recipe required three ingredients: amber, minium (known as ‘red lead’) and linseed oil. Nigel and Dana explained that though the recipe we were using called for ‘yellow amber’, this could have also meant copal, which is similar to amber, only softer and cheaper (both then and now!), and has a lower melting temperature, so we replaced the amber with copal in this experiment.

The process of making the varnish was on the surface quite simple: melt the copal in a pot, combine it with boiled linseed oil, and add minium. It was done in this way, based on our twenty-first-century knowledge, to help the oil emulsify. However, carrying out the process presented challenges. Heating linseed oil generated a smell that was difficult to handle. It is also a potentially dangerous activity; heated linseed oil is prone to self-combustion, which was why we were working outside in the cold. Similarly, when we began to heat the copal, steam rose out of the pot that became so powerful we had to wear protective masks in order to breathe. And as it began to melt, the copal grew dark and sticky, requiring great physical effort to keep turning the congealing mass. When it finally melted, it was a gloopy substance and not a true liquid. Already reality confounded our expectations (although later we learnt that neither amber nor copal ever fully melt into a liquid).

Throughout this class we have encountered questions about authenticity and the extent to which twenty-first-century knowledge affects our work with the recipes. In this case, we were aware that the science we were relying on would not have been available to those making the amber varnish five hundred years ago; our thermometers, masks, and gloves were not available then. Sixteenth-century skills used to make this varnish would have been more comparable to those of an artist than a scientist. The ‘tacit’, or unarticulated, knowledge required to read and correctly interpret this recipe could only come from years of experience and hands-on learning.

By the end of the day our experiment revealed some stunning surprises.  The light copal and linseed oil turned into rich, dark browns similar to molasses. Our varnish was not something you might expect from such a light resin, and we wondered what had gone wrong. Was it the weather, our equipment, or maybe we should have crushed the copal into smaller pieces? And would we have another opportunity to repeat the experiment?

But then, in the last hour, we found out that we could get our hands on some amber! The following week suddenly became more exciting because we would be able to try the recipe again, this time with amber. Our hopes were high and our spirit renewed, hoping that next time it would be more successful. We would be able to use the knowledge gained in our first experiment in our next attempt.

Click here for the previous blog from the ‘Techne’ seminar/lab series.