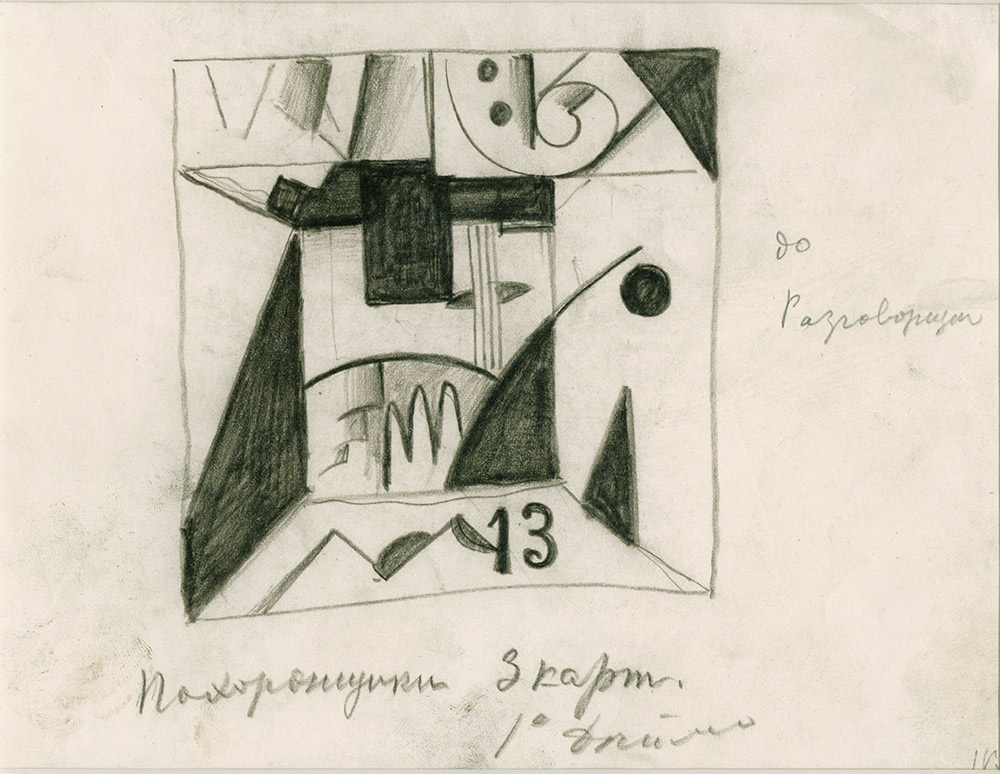 “We can only perceive space when we break free from the earth, when the point of support disappears”

Malevich and the artists of the Russian Avant-Garde movement re-invented space. Their explorations and experiments in the world of theatre helped them to develop and articulate their artistic visions and ideas.

The narrative space and extraordinary costumes created by Malevich for the 1913 opera production of Victory over the Sun, provide a backdrop that propels our understanding of the Avant-Garde and Suprematism. Through his experiments in theatre, we can see how Malevich’s idea for a victory over the natural energy of the sun began as a powerful set design – a diagonal line dividing a square into black and white, perhaps representing night and day. These designs preceded and inspired Malevich’s iconic Black Square painting which today is widely considered to be a groundbreaking, pivotal moment in the history of 20th century art. See the Black Square before the 26 October 2014 at the epic retrospective of Malevich’s work at Tate Modern.

Architect Zaha Hadid describes how Malevich influenced her career. Studying his work helped her discover and develop an architectural language and methodology, which enabled her road to abstraction.

Hadid “found the traditional system of architectural drawing to be limiting, […] studying Malevich allowed [her] to develop abstraction as an investigative principle.”

Zaha Hadid’s sculpture, Crest, currently arcs over the ellipse of the pond in the V&A garden. Pushing the boundaries of the material from which it is created, Hadid’s fluid and weightless sculpture changes our perception of this familiar space and reflects a multitude of images and textures. This elegant intervention created as part of the London Design Festival, is a reminder of the profound influence and legacy of the principles of the avant-garde movement on contemporary practice.

The V&A’s forthcoming exhibition, Russian Avant-Garde Theatre: War, Revolution and Design will include over 150 works from the A.A Bakhrushin State Central Theatre Museum and the St Petersburg State Museum of Theatre and Music. The display will reveal 20 years of radical and revolutionary designs for performance produced between 1913 and 1933 against the backdrop of the First World War and Russian revolutions.

Really looking forward to the exhibition. I remember the 1971 Art in Revolution exhibition at the Hayward, and still have the catalogue and some reviews. Interesting difference in political climate. The reconstruction of Lissitsky’s ‘Proun Room’ was boarded up at the request of the Soviet authorities, and while Popova’s theatre work was allowed to be exhibited, her paintings and those of Malevich weren’t allowed to be shown. The Soviet preface to the catalogue tells us that many of the things we admire “meant little to the people” and were “Utopian and premature”.

A good review by Gideon Hall can be found in http://femalearts.com/node/1506

This was such a fascinating period of art, however after the end of the Soviet Union, the art world was flooded by forgeries and as a consequence many curators were reluctant to stage exhibitions because of the uncertain provenance of what became available. However, because of the V&A’s vigorous scholarship what is in this exhibition is both genuine and a rare treat. I would recommend attending because this work is shamefully not often exhibited.

Really great exhibition -I have been a few times and have written a review on the exhibition. But there is so much more to see: learn about Meierkhold, Biomechanics, The Blue Blouse Groups, Eisentstein’s theatre work, see work by Tatlin, Malevich, Exter, Popova and many new artists I never knew about. It is a must see!!!

very sad to have missed the exhibition: Russian Avant Garde Theatre : War, Revolution. And Design 1913-1933. Did this exhibition go to any other museum on any other country?
And, is their a Catalogue of the exhibition I could buy?
Marilyn N Jensen