* In this blog series, we will be posting 8 short stories displayed in Unidentified Acts of Design,  exploring contemporary production and manufacturing in Shenzhen and the Pearl River Delta. This week we look at one of the most defining features of Shenzhen manufacturing landscape: ‘shanzhai’.

The Pirates and the Makers /Shanzhai A key term that one will soon learn when landing in Shenzhen is ‘shanzhai’, which has been used – often in very derogatory way – to refer to counterfeit goods and cheap unlicensed imitations of established brands. The term was first adopted in Hong Kong a few decades ago, but re-emerged in Shenzhen in the 2000s when the electronics and hardware market of the city had already become known worldwide. ‘Shanzhai’ indicated the low-cost electronics products imitating mobile brands such as Apple, Motorola and Nokia, and usually sold to less affluent customers in the Huaqiangbei electronics market or on-line.

This phenomenon was so widespread that ‘made in China’ has become associated by many to a culture of producing ‘fakes’. A CCTV programme aired in November 2008 officially sanctioned the existence and scale of the ‘shanzhai’ phenomenon in Shenzhen. The participants to this program were asked to illustrate its characteristics but also offered insights on how the manufacturing system behind ‘shanzhai’ could in fact be considered an alternative model of industrial production or indeed a specific stage in industrial development, as was the case in the early phases of consumer products development in Japan and Korea a few decades ago.

Speed is the term that everybody uses when referring to the manufacturing system in Shenzhen. All companies operate through an extensive, fast-moving and integrated network of specialized factories, suppliers, agents and distributors, where the easy availability of key components for the making of mobile phones, particularly the ‘gongban’ (generic printed circuit boards) and the ‘gongmo’ (casing for ‘gongban’), make the production of a new phone possible in two or three months. Such products are made by several different manufacturers, including the so- called ‘white brand’ companies, and are generally not patented.

In the same place where electronic components and parts are sold several stalls also provide repair services for virtually any type of mobile phone in the market. 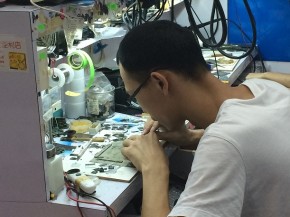 The ability to fast prototype and freely assemble components in different formats have also created the conditions for innovative solutions and adaptations that are responding to specific market requirements, usually not covered by leading brands. Typical examples are phones for the elderly, handsets with long-lasting batteries, or mobiles with multiple sim cards and speakers.

Some companies have gradually specialized in very distinct offers, such as Jialantu that began researching old people phones in 2008 and has developed four models from 2010 up to now, while licensing their patent to other companies. A few have expanded their outreach in Africa and India, with minimal competition from better known and established brands. Others are now moving to design and manufacturing services for clients, including collaborations with makers, or developing their own brand.