Among the prize exhibits in the V&A’s new Medieval and Renaissance Galleries are the so-called Forster Codices, a trio of notebooks kept by Leonardo da Vinci. They got me thinking about the books that artists and designers use for sketching. One of the interesting features of the Leonardo volumes is that they include five separate notebooks, set into three bindings. It’s a reminder that in the early modern period, the relation between a book’s pages and its covers was quite flexible. Right up until the 18th century, you had to get your loose leaves of paper from a bookseller, and then take them to a binder yourself. (In London, the churchyard of St. Paul’s was the centre of this trade.) A flip through the Forster Codices (you can do this digitally here) reminds you of a less historically-specific aspect of notebooks for sketching: artists tend to react to the format. 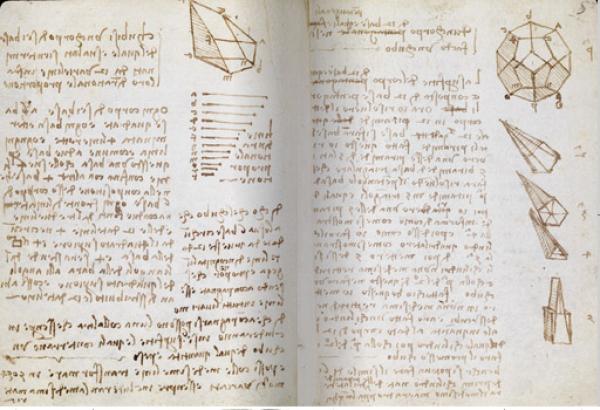 Even someone of the inventive power of Leonardo, seemingly by instinct, divides up the two rectangular facing pages of each spread into more-or-less evenly divided spaces. In the example at right, each page has been given a more or less 2/3 – 1/3 composition, with the right-hand column reserved for illustrations and notes. It’s as if it were designed on a modern layout grid; Massimo Vignelli would be proud.

Over the centuries notebooks have taken some beautiful and surprising forms, which have of course dictated the drawings (and writing) that is committed to them. In the 17th and 18th century, elite examples sometimes had ivory plaques for pages. You marked them with a stylus, and could then  rub the ivory clean, like a school child’s tablet. The below example from the Gilbert Collection at the V&A still bears numerals scrawled on to its delicate surface. 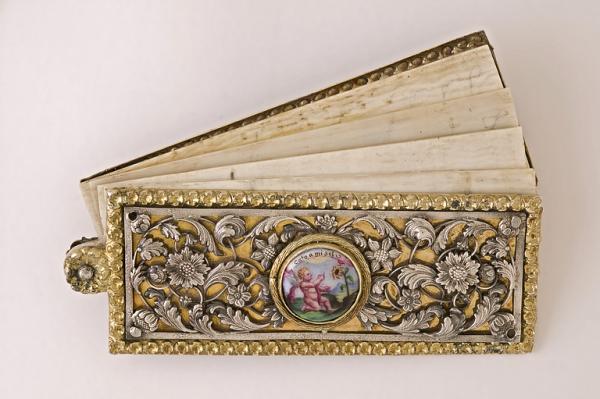 More pertinent to this blog, though, are books that designers and artists use to collect pictures. Fascinating for the way they reflect a person’s (or business’s) practice and thought process, they can be divided roughly into two groups. The first, which might best be described as in-house ‘pattern books’ (not to be confused with the published kind, like Chippendale’s Director), are like scrapbooks with a purpose. They are reference guides for production. Maybe they show things made by the company in the past, maybe images by competitors, maybe historic objects – all intended to aid in further design. Though they serve the same purposes as an artist’s sketchbook, often the pictures are not drawn, but rather are pasted in and then perhaps annotated or marked-up. Here’s a spread from a book kept by the Leeds ceramic firm Hartley, Greens & Co, which shows the collage-like approach typical of such pattern books. 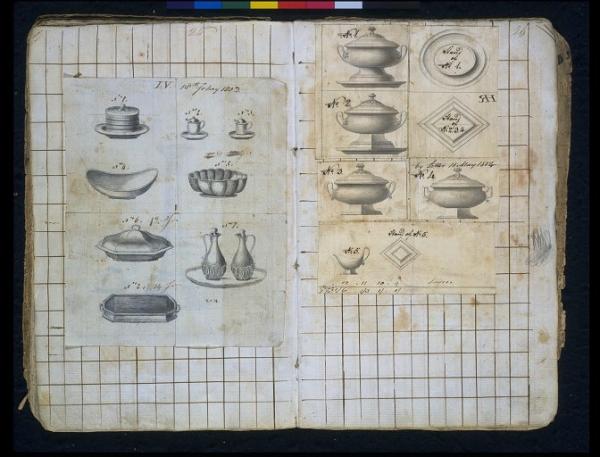 Then of course there is the more familiar sort of sketchbook, usually small and portable so that the artist can take it out at a moment’s notice. Like Leonardo, most artists who use sketchbooks tend to respond to the format. The two very different drawings below both use the edges of the page very effectively. 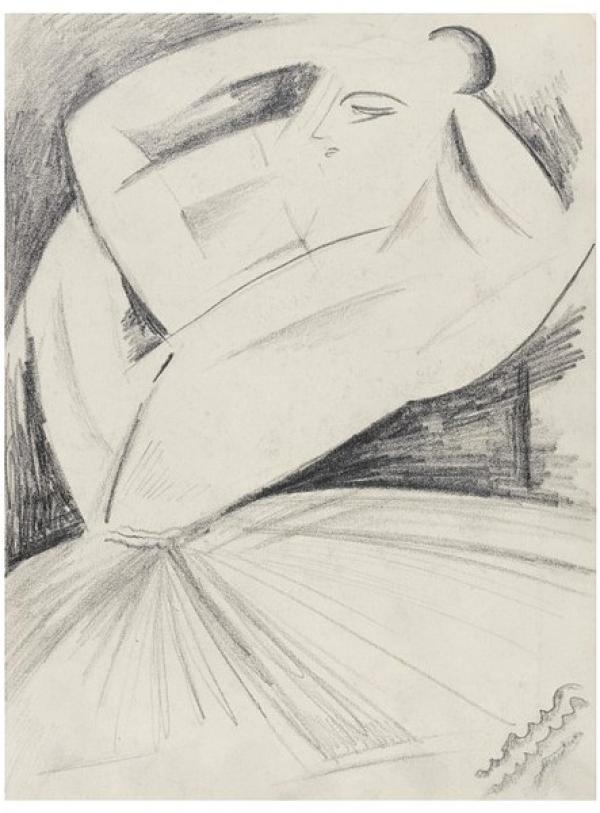 The one on the left is an unattributed drawing, dated 1844, made by an unknown European artist visiting Constantinople (present-day Istanbul). I’m pretty sure it shows a kiosk for distributing water and sherbet; you can still see some of these lovely tiled buildings there today. In this case, the motif initially seems to have been placed very casually on the page. But actually the surrounding white space creates a palpable sense of distance from the building – you can really feel the on-the-spot observation happening. On the right is a very different drawing, by the Russian Constructivist artist Natalia Gontcharova. In this case the image seems to crowd the edges, as if it wants to burst out – perhaps an expression of the explosive dynamism in this modernist, utopian style. But once again you get a sense that she is right there, as if she were sitting in the front row at a concert.

This idea of responding to the notebook’s physical qualities has been taken to extremes recently in a terrific project sponsored by Moleskin, in which artists and designers were invited to interact with the company’s signature small-scale notepads. (My thanks to Stefano Merlo, currently a student at the Design Academy Eindhoven, for this link.) Many of the designers, from Ron Arad to Paula Scher (below left and right), simply sketched away in their inimitable styles. 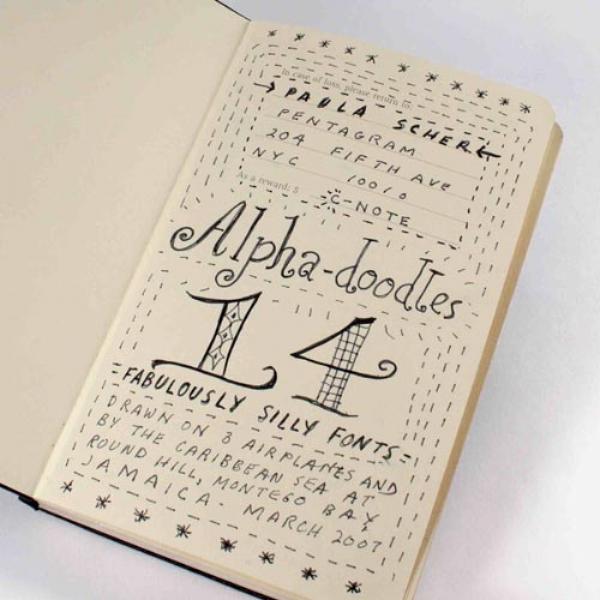 But others chose to physically transform the notebooks into objects in their own right. Italian furniture designer Aldo Cibic cut a little hole for seeds in the pages of his Moleskin. Modernist entrepreneur Terence Conran used his almost like a pattern book, filling it with postcards and other pictures of design interest. My favorites are the notebooks turned into sculpture, like the one by artist collective Assume Vivid Astro Focus. This group (whose members remain anonymous – they’ll only reveal that they were ‘born anytime between the 20th and 21st centuries in various parts of the world’) disassembled the Moleskin and put it back together so that it is completely unrecognizable, as you can see below. Maybe not what the company had in mind! But it’s only the latest response to the notebook, which has always been a powerful invitation to creativity. 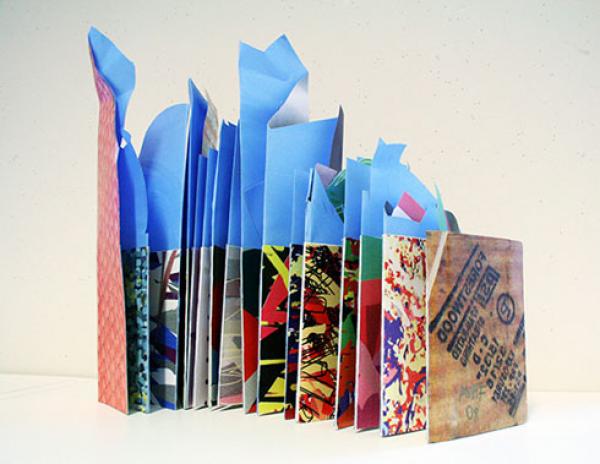