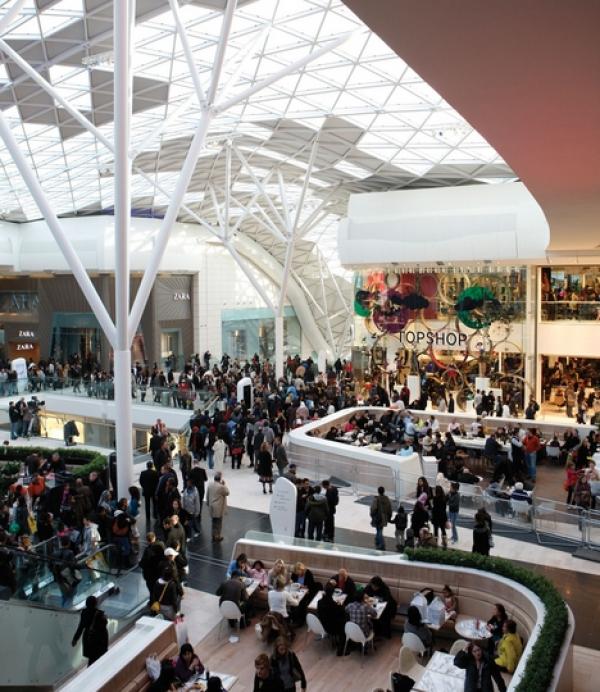 Last week I took my students from the V&A/Royal College of Art course in the History of Design to Westfield Shopping Centre, the mega-mall that was finished in Shepherd’s Bush in west London last year. We were toured by the head project architect, Patrick Vantomme, as well as Paul Sutliff, the director of retail designers Callison Europe. Paul was an architect for Bluewater Shopping Centre, another fixture on the London shopping scene.

I’m not sure what you think about shopping malls – come to think of it, I’m not sure what I think of shopping malls. But there’s no doubt they are fascinating from a design point of view. The main challenge for a shopping centre’s designer, apart from creating a prosperous and stylish look, is to maximize what Paul Sutliff calls “dwell time.” There’s not much the architects can do to make each store’s products more desirable. But they can try to prolong the average visitor’s stay in the mall, which tends to increase the amount of money spent. There are a few simple tricks to achieve this: no clocks; no windows; lots of daylight; spaces that are clear enough to navigate, but complicated enough to keep shoppers from getting bored.

Here is a first-floor plan for Westfield, in which you can see several of the solutions that Patrick and his colleagues devised for the mall. 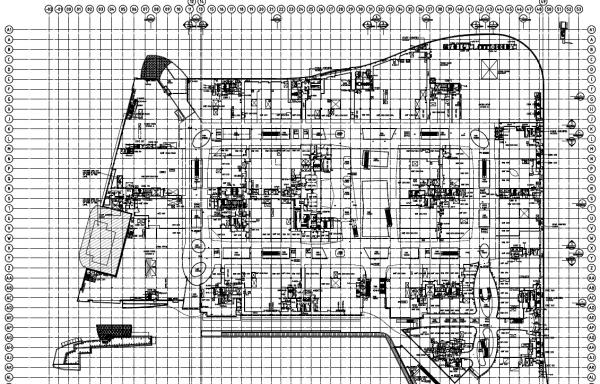 It’s quite a complicated drawing, but a few features stand out. First, the overall shape – like a giant squared-off Figure 8. The first suburban shopping centres, like Northgate Mall in Seattle (1950), were one-storey buildings laid out in a straight linear plan, with a large store at each end acting as anchors. )Paul and Patrick called these “dumbbell” plans.) The problem is that once you walk down the mall, you may not feel like walking back – and even if you do, you certainly won’t take a third or fourth pass. At Westfield though, there are two levels, and the complicated layout encourages you to make endless circuits through the building. This is also true at Bluewater; the V&A owns a model of the building, and you can see its triangular structure quite clearly, with a big anchor store located at each corner. 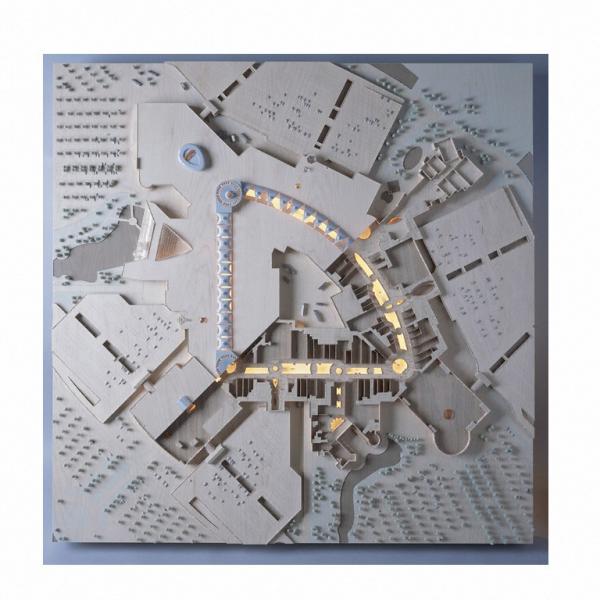 If you look back at the Westfield drawing, you’ll see that there are ovals cut into the walkways. These allow you to see down to the ground floor, getting glimpses of other stores. They also visually lighten the place. And you’ll also notice an irregular bit in the plan at the lower right. This is the Village, a high-end shopping area with stores like Prada and Louis Vuitton vying for the luxury shopper’s attention. Here is a concept drawing for this part of the mall, and the space as built. 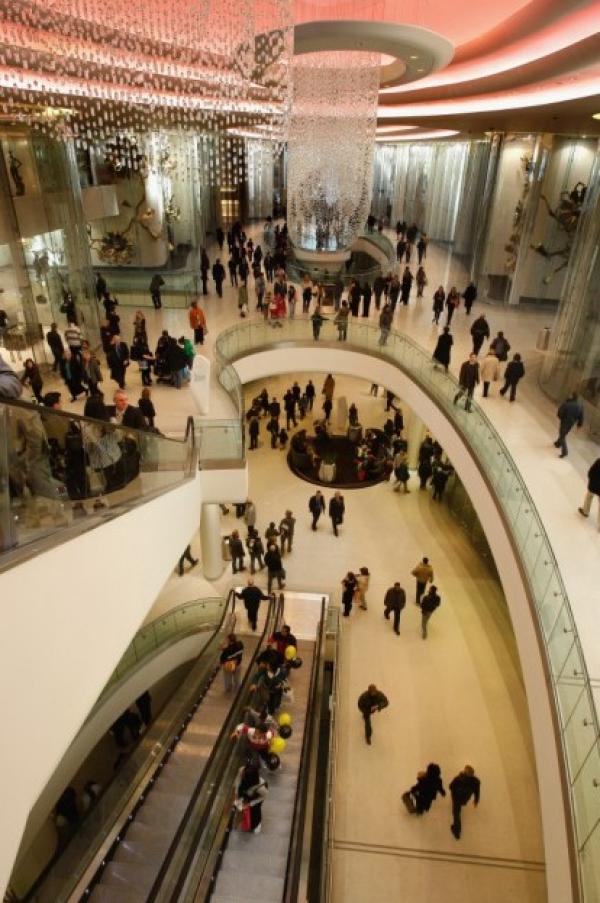 This is one case where the frictionless quality of the computer rendering is translated faithfully into concrete and glass. It’s a style that prompted architectural critic Iain Sinclair to describe the mall as a “a sleek, committee-designed hangar [that] looks like a vanity-project swimming pool.” But there is a practical logic behind the design. A mall operator doesn’t want to distract from the (often very strong) design identities of the individual brands arrayed along the walkways. And as Patrick notes, a retail architect’s job is just beginning when the building opens. Stores come and go, and the need to keep things looking constantly new requires a framework that imposes as little as possible on future additions. The roof at Westfield has a lot of character, because it has to keep looking interesting for decades. But most of the other elements have to be simple and flexible. The building is completely designed around the capitalist principle of creative destruction. 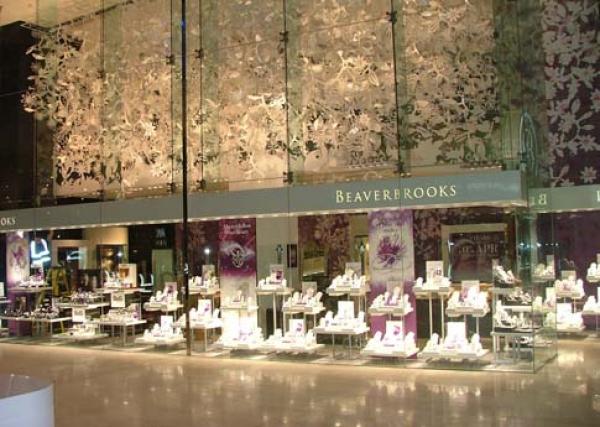 A final, and to me fascinating, point about mall design is that stores pay different amounts for different kinds of space. The square footage closest to the foot traffic costs the most. Once you get 5 meters into the store, though, the price per square foot starts falling, and keeps falling as you get further back away from the front display windows. This allows luxury brands like Beaverbrooks jewellers, at left, to have small, expensive boutiques, while larger stores can have extensive floor space and storage in the back to keep excess stock. Restaurants and other amenities pay less per square foot than stores (because they increase “dwell time”), and the huge anchor stores pay very little. They are there to act as the big draws for the little shops along the mall, which in turn subsidize the larger stores by paying relatively higher rents.

As many people have noted, the timing of Westfield’s opening couldn’t have been worse, given the recent economic downturn. But that’s not bad planning, it’s bad luck: the project has been on the books for over a decade (it began before the last recession had even started). Today there are a few store spaces that are unrented, easily recognized at the mall because they are filled with shallow window displays.The luxury outlets in the Village particularly are feeling the pinch. Like it or not, though, Westfield is here to stay.

One last point, which gets to the heart of mall design as a process. Places like Westfield have a reputation for being manipulative and unreal: triumphs of spectacle over substance. But from the perspective of their creators, they are supremely practical concerns. Patrick spent a lot of his time with us describing his interactions with builders and craftsmen. “Let’s say you want to build a concrete form, ” he said. “Drawing it couldn’t be easier. You make a shape, and fill it with dots to show it’s concrete. But then you actually see the guys pour the form, you learn about the process. And then you have to explain to them why they have to take it down and rebuild it eleven feet to the left because the design has changed.” The retail business is an endless process of negotiation – between the mall operator, the individual stores, the contractors, and ultimately the consumers. In this system of exchange, design is the ultimate go-between.