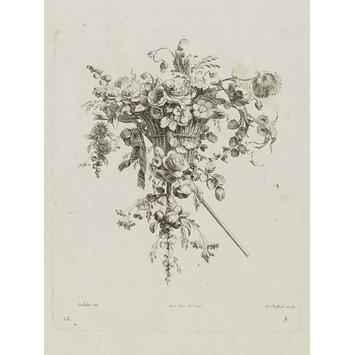 In 2016, an eighteenth-century manual will be revived here, in London. This manual is Le Dessinateur pour les etoffes d’or, d’argent et de soie, which in English would more or less mean The Gold, Silver, and Silk Fabrics’ Designer. Its author was the adventurous Antoine Nicolas Joubert de l’Hiberderie. I have branded him adventurous because publishing a manual about silk design in the eighteenth-century was not an easy task as it compromised the secrets of the most important European silk manufacturing city, Lyon.

What I personally find most fascinating, beyond the publication of this manual, is what actually drove Joubert to write it: despair. Joubert was born in 1725 or 1729 in the south-east coast of France, Antibes and, as a foreigner of the boundaries of the region of Lyon, Joubert may have had difficulties accessing the most important Silk Guild (‘La Grand Fabrique’). However, Joubert had been well-trained with one of the most important flower-painters of the time,  and he also had significant experience in silk commerce.

His talents made him worthy of the position of chief designer at one of the most prominent and glamorous Lyonnais’ manufacturer, Claude Pernon, in a time when fashion was all about the graciousness of the fabric rather than the shape or volume of the garment. However, as a consequence of the firm’s bankruptcy, in 1760, Joubert had to reinvent himself and, decided to give us testimony of all the silk design secrets of his time. Of course, when he communicated his project to the Lyonnais Guild, his book was censored and he had no other option but to have it issued in Paris.

On the 5th of March, not in Paris, but in London, we will celebrate Joubert and his legacy with a conference held at the Courtauld Institute of Art.  The conference, entitled Fabrications: Designing for Silk in the Eighteenth Century will analyse, critique, contextualise, review and engage with the Le dessinateur in the light of its themes: production, design, technology, education, botany and art.  We hope that it will inspire new discussion about Joubert, and his manual, and we encourage you to attend.  For further information on the conference, please see:  http://courtauld.ac.uk/event/fabrications-designing-for-silk-in-the-eighteenth-century

Blogpost by Victoria de Lorenzo, student on RCA/V&A History of Design course, organising assistant and participant of the workshop and conference, and Kirsty Hassard