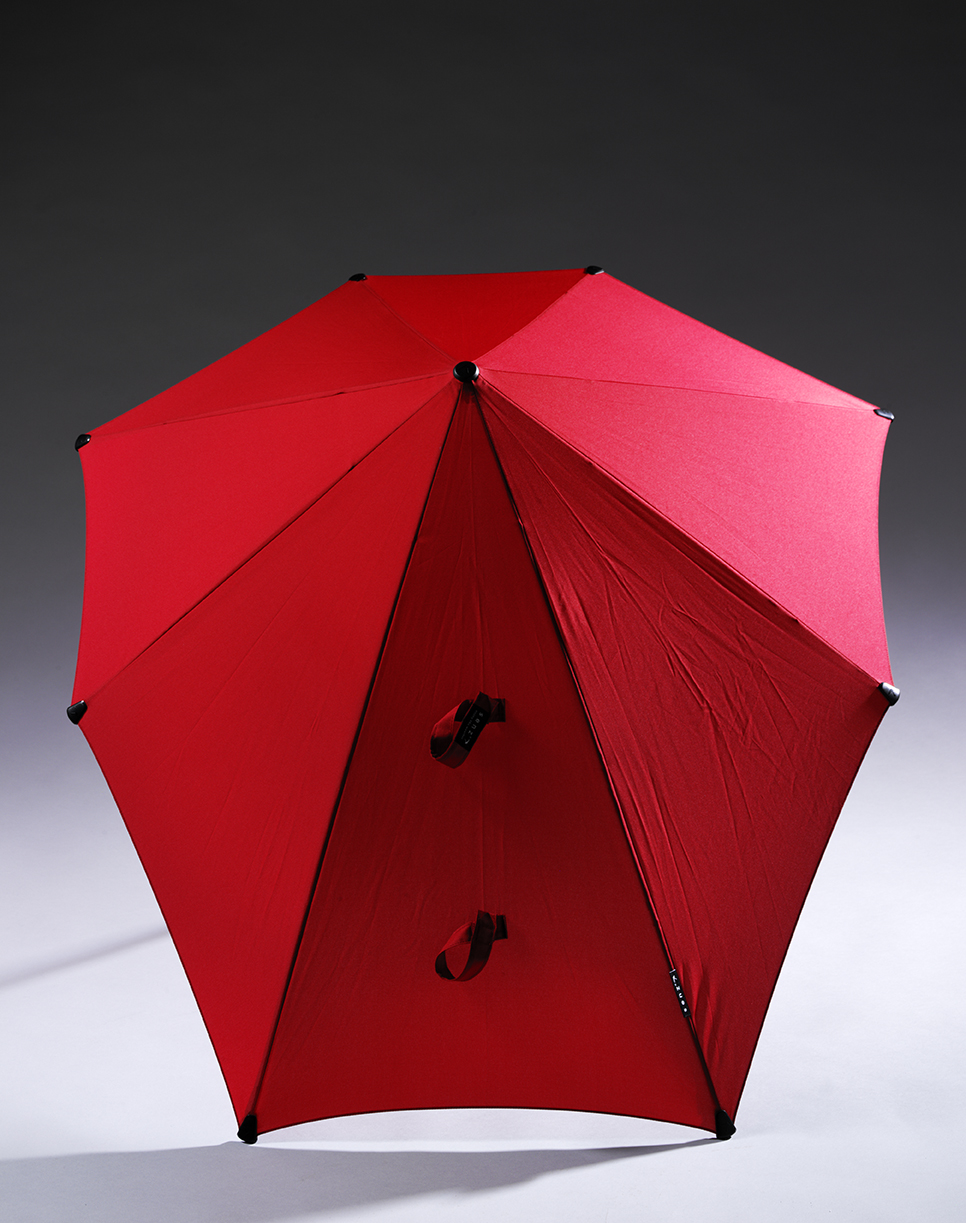 Umbrellas have been used to keep dry since distant antiquity, their basic shape has not changed a great deal throughout history. During the course of my research I found that each year, on average, around 1000 new patents are registered worldwide for ‘improved’ umbrella designs. New designs can include improved, stronger rib technology or alterations to the basic shape of the brolly, however, the overwhelming majority of the umbrellas that we see around us on a rainy day are of a traditional, round-canopied shape. Umbrellas in consumer societies are extremely cheap, despite a reputation for frequent inversions or structural failures, and so are widely considered to be disposable items. This is, however, extremely wasteful.

Few new designs are really successful due to the cheapness and disposability of umbrellas, so anything which bucks this trend is immediately interesting. Industrial designer Gerwin Hoogendoorn became frustrated by the obvious limitations of cheap traditional umbrellas, which tend to invert and/or break in even moderately strong winds, and so founded Senz° in 2005 with two of his classmates at Delft Technical University. The resulting design, known as the Storm, is visually striking. The aerodynamic hood channels winds over its surface, acting much in the same way as a bicycle helmet. The shape, coupled with very strong, single-piece, flexible ribs (fibreglass inside a steel ‘jacket’), dramatically reduces the likelihood of the umbrella inverting. Indeed, a video on the company’s website demonstrates this very effectively, claiming it will remain uncompromised even in gale force conditions. The ends of the ribs also sport rounded plastic caps to reduce the danger to other pedestrians’ eyes.

Storm umbrellas were first issued in 2006, the original production run of 10,000 sold out in only nine days. The design won numerous awards, including prizes from (2007) Red Dot, Dutch Design, (2008) IDEA (gold), Good Design, Gold International Design Excellence Award, (2009) ICSID Star of the Observeur, and iF Product Design award. They have been retailed in the UK since 2008.

A Storm umbrella was acquired by the Museum earlier this year for my rainwear display in the fashion gallery. Its acquisition brings the V&A’s collection of umbrellas up-to-date, and also helps to bring greater recognition to one of the few really successful alternative umbrella designs of the 21st century. Much of Senz°’s visual advertising focuses on the Storm as a fashionable accessory, showing models posed in bright urban environments. This is of the utmost relevance to the Textiles and Fashion Collection, but also raises comments as to how the umbrellas can be perceived by users, either as an advanced gadget, a practical way to keep dry or as a fashion statement.