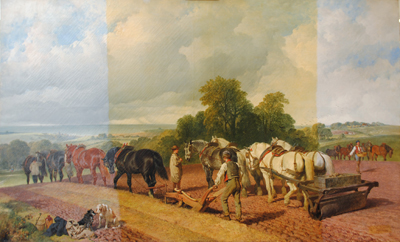 This week’s guest post, written by Arabella Peaver and Morgan Wylder, describes the conservation of a painting by John Frederick Herring. With only a few weeks until the V&A’s Constable exhibition opens to the public, some of the Constable paintings normally on display in our paintings galleries will be relocated to the exhibition. This offers a great opportunity for us to have some great paintings from the permanent collection taken out of our stores, conserved and put on display while our Constables are elsewhere in the building.

For both of us, the opportunity to carry out an internship at the V&A is incredibly valuable, not only because we get to work on pieces from such an exceptional paintings collection. but also because of the amount of inter disciplinary collaboration with the other eight conservation departments, something that is almost unique to the V&A.

The Constable exhibition is looming, and several of the V&A’s large Constable paintings have been relocated from the permanent galleries to be shown in the exhibition. So in the past few weeks, we have been preparing several paintings to be be shown for six months in the paintings galleries. We began by undertaking the conservation treatment of John Frederick Herring’s ‘Seed Time’.

A bit about John Frederick Herring…

John Frederick Herring (1795 – 1865) was a popular 19th century British painter lauded for his horse paintings, including races, hunting scenes, and later in his life, agrarian scenes. In his lifetime, he received commissions from George IV, William IV and Queen Victoria. Herring grew up in London, but began his professional life as a coachman in Doncaster. During that time, he drew horses as a diversion, and also painted signs and coach panels. Through this, he gained some artistic recognition and was asked to paint the portraits of the winners of the St. Leger and the Derby for a number of years. In 1833, he returned to London to train as a professional artist under Abraham Cooper, RA. After enjoying some notoriety in London, Herring relocated to Kent and began to paint more rural subjects, like this painting.

‘Seed Time’, and a similar painting by Herring, ‘The Harvest‘  (Yale Museum of British Art), are also important in their documentation of mid-19th century agricultural methods. In our painting, the multiple steps of seed-planting are depicted, including ploughing of the stubble (left), rolling (middle), and seed distribution (right).

Under closer examination, we could identify some of Herring’s painting techniques. For example, we could see that Herring began by consulting a smaller drawing, which he then transferred to the larger canvas using a grid system.  We found evidence of this scaling-up process in the carefully measured pencil marks on the edges of the painting.

After using the grid to first copy the composition with pencil or thin paint, he then introduced form and shadow with transparent, brown earth-coloured paint, which still remains visible around the contours of some figures. Subsequently, Herring placed opaque colours to fully render the rich, detailed scene. Thin, tight brushstrokes and some passages of wash-like transparent paint resemble techniques he also used in his watercolour paintings and sketches.

Overall, Herring gives us a very precise, well-planned rendering so we can fully enjoy the Kent landscape and understand 19th century agricultural techniques!

A bit about our treatment:

When the painting arrived in the conservation studio we found it in generally good condition. However, it was immediately clear that the natural resin varnish had become very yellowed with age, as you can see: 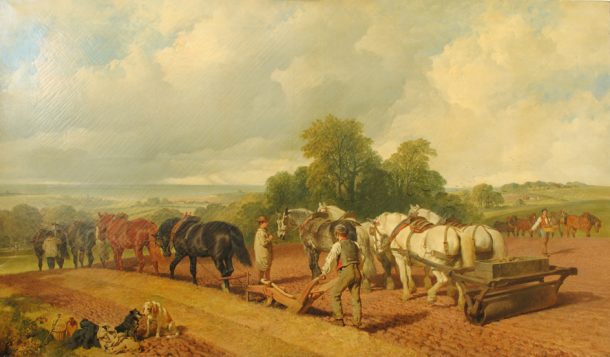 The painting during treatment

This makes the subtler tones and colour in the painting look muted and dull, which in turn makes the whole landscape look flat and lifeless. The effect of the varnish removal is dramatic as you can see below

The overall yellow hue caused by the discoloured varnish gave way to a far greater tonal range of subtle greens and blues – in the end closer to the appearance of the painting when it was first created. The final result is a dramatic improvement:

After applying a fresh, new synthetic varnish to saturate the original colours (this one will not yellow over time like the coating you see above), we retouched a minor paint loss, added a stretcher-bar lining to the back of the painting for protection, and re-framed it for exhibition.  Soon you can see it for yourself –  the painting will be on display for viewing this August in the Paintings Galleries.

It’s insane how good my painting looks! My legacy is preserved!