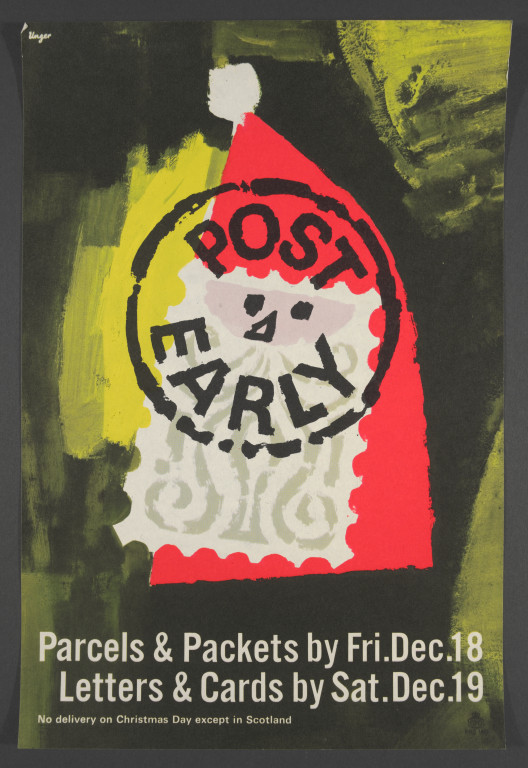 When it comes to Christmas shopping, two perennial problems are what to buy and – if you’re not handing over your thoughtful gift in person – getting it in the post in time to reach its lucky recipient. Hans Schleger and Hans Unger, two of the émigré designers featured in the first phase of the V&A’s ‘Design Archives Online’ project, tackled these issues in their own distinctive styles. Both designers hailed from Germany, began their careers in Berlin and settled in England after spending time abroad; Unger in South Africa and Schleger in the United States. And both, according to those that knew them, had a sense of humour and fun.

Arriving in New York from Berlin in 1924, Hans Schleger threw himself headlong into the life of what he described in 1930 as the “great ant hill.” Bringing fresh, vivacious and thoroughly modern ideas to graphic advertising, within two years of his stepping off the boat his commercial success saw him hailed as “the Wunderkind” by Gebrauchsgraphik magazine.

Schleger’s work (under the moniker Zéró) for men’s clothing chain Weber and Heilbroner is amongst his most well-known. His clean and modern illustrations beautifully offset Silas Spitzer’s slightly sardonic copy. The Weber and Heilbroner series includes sorry tales of wives struggling to satisfy their husbands’ very particular tastes at Christmas. The offending ladies are directed to offer redress to their ‘Lord and Master’ via purchases from (naturally) Weber and Heilbroner!

Moving far from the ‘lustrous silk pyjamas’ of the 1920s, there was a plethora of desirable gifts to make your husband’s Christmas in a 1950s Austin Reed advertisement illustrated by Hans Unger; a Bri-nylon shirt, a “host coat to play host,” Nefertiti cuff-links or a Zodiac tie. What man could resist?

Like Hans Schleger before him, (as seen in Design Archives Online’s first blog post) Unger also undertook work for the General Post Office (GPO) over a number of years after settling in the UK in 1948. This included a series of advertisements published in the run-up to the festive season in the 1950s and 1960s. Unger’s cheerful and deceptively child-like posters exhort the public to travel, shop and post early in time for Christmas.

The V&A’s Archive of Art and Design (AAD) is located in what was once the headquarters of the Post Office Savings Bank and the site still contains the West Kensington Royal Mail delivery office. As a sign that some things change slowly they have up as I write the 2016 incarnation of Unger’s festive advertisements. And in case this reminds you that you need to get some Christmas cards in the post, this year make sure you do it by December the 21st!

good designs. it looks very attractive. me too wish to design such like paintings. thanks for sharing this blog here.

Nice post.It is a look like good design.thank you fro sharing this information.I really enjoyable to read your post.