The barge she sat in, like a burnish’d throne,
Burned on the water: the poop was beaten gold;
Purple the sails, and so perfumed that
The winds were lovesick with them; the oars were silver,
Which to the tune of flutes kept stroke, and made
The water which they beat to follow faster,
As amorous of their strokes.

So Shakespeare imagined Cleopatra’s perfumed voyage up the river Cydnus.

In February 1878 ‘curious sightseers’ cheered from the bridges as they beheld the equally strange (although less fragrant) spectacle of a 92-feet long, cigar-shaped iron cylinder (dubbed Cleopatra), draped in bunting, bobbing up the river Thames towards the Adelphi Steps at Victoria Embankment. No ‘seeming mermaid’ steered this craft, however, but the sea dog Captain Carter. It’s precious cargo? Cleopatra’s Needle (a romantic misnomer), one of a pair of obelisks erected by Pharaoh Thutmose III in c.1500 BC at Helopolis in Egypt. 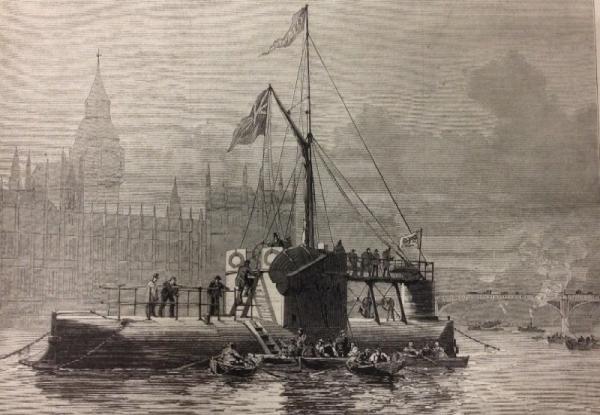 The voyage from Alexandria to London had not been without incident. On 14 October 1877, encountering a severe gale and rough seas in the Bay of Biscay it threatened to capsize and sink. After an unsuccessful rescue attempt, which resulted in the loss of six souls, the Cleopatra drifted for four days before she was found and towed to Spain for repairs. 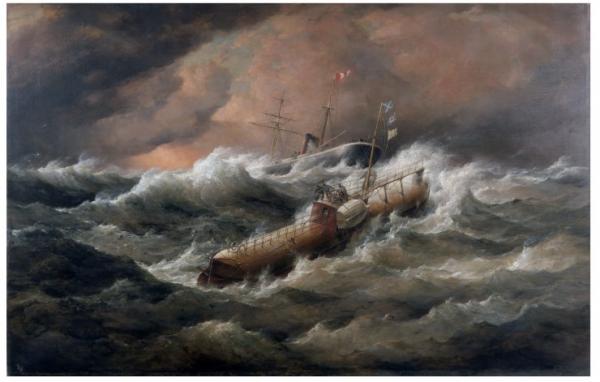 The obelisk had been presented to the Prince Regent in 1820 by Mahommed Ali, Viceroy of Egypt, in commemoration of the British victories at the Battle of the Nile and Battle of Alexandria in 1801. Money and logistics played their parts in stymieing several attempts to transport the obelisk to London: however, regular readers of this blog won’t be surprised to learn that the V&A’s Director, the ubiquitous Henry Cole, played a small role in the obelisk’s recovery: in a diary entry for 13 November 1866, Cole wrote: ‘I asked the D of Edinburgh to bring over Cleopatras needle &c. He said “Why shd I take the trouble?” & took away the Paper. He knew all abt it & what shd be done’.

In July 1878, the Times reported that an ambitious scheme was under consideration: ‘… under the direction of Major Festing, of the South Kensington Museum, Mr. Bullen inspected the obelisk with a view to taking a complete cast of it for that institution’. The following month, the delicate process of casting was in full swing: ‘the ingenious artisans from the South Kensington Museum have been busily carrying out Major Festing’s instructions … Already several scores of moulds have been secured … For the present these operations have been confined to the pyramidion and the portion of the shaft above the iron sheafing or jacket … The waist and the section of the obelisk below the jacket will be dealt with after the inauguration’. 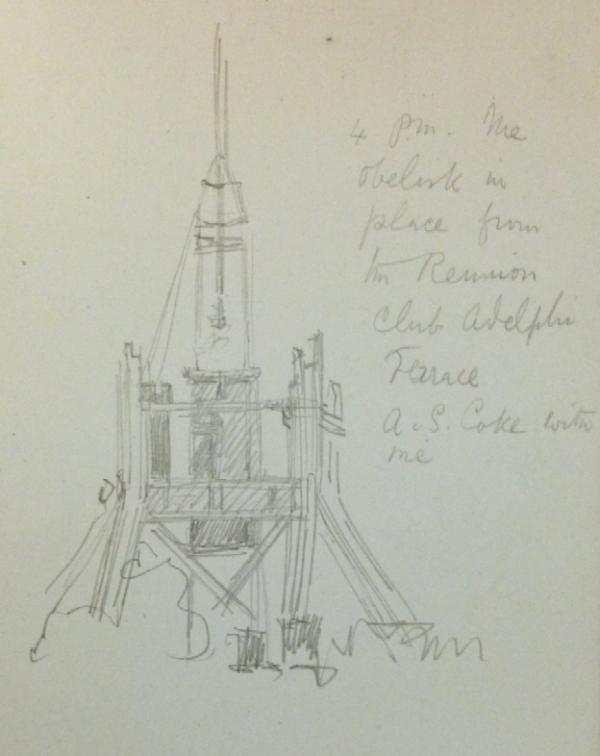 What would the V&A want with a full-size cast of Cleopatra’s Needle? The answer is to be found in this minute paper, which in its friable state looks as if it was excavated from the Alexandrian sands at the same time as the obelisk! 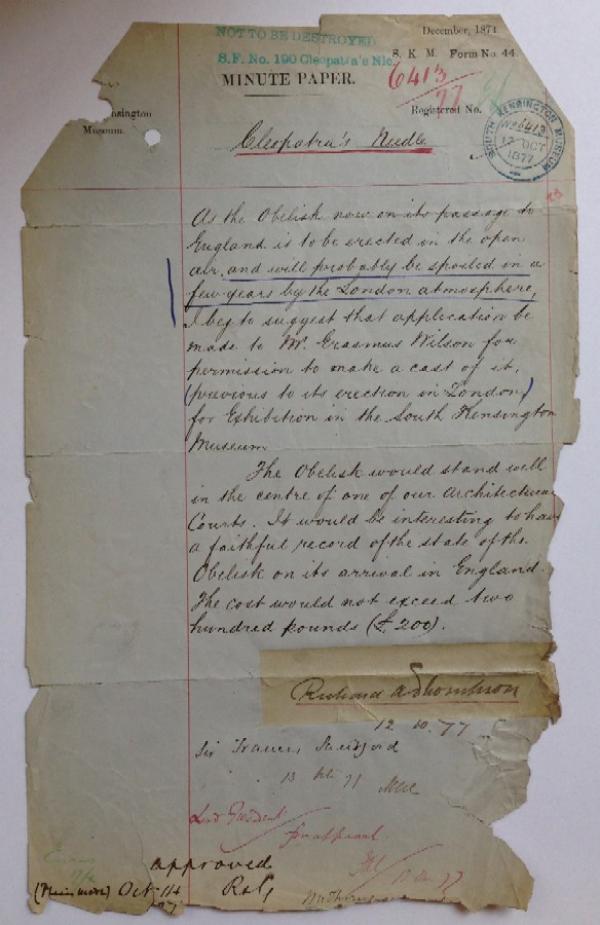 Concern about the effects of air pollution on the hieroglyphics and a desire for an arresting object to place in the Cast Court were sufficient arguments to persuade the Lord President to approve the casting.

Not everyone was convinced, however. One correspondent to the Times wrote that ‘I am grieved … that the Obelisk is to undergo the process of a plaster casting being made from it for [the] South Kensington Museum’. Another raged against the prospect of ‘a huge oblong mass of plaster devoid of any one quality which can redeem its ugliness’. Warming to his theme, he continued: ‘The obelisk on the Embankment is on many grounds worthy of admiration; but to repeat this in a lump of plaster placed within a few minutes’ reach of the original is, to my mind, not a fault, not a folly, nor even a blunder, for all these involved capacity, but sheer stupidity’.

A notice in TheAcademy announced that ‘A cast of Cleopatra’s Needle will shortly be placed in the south-east court of the South Kensington Museum. Even there it will look, it is to be feared, somewhat insignificant, compared with the casts of some of the other great pillars in the court’. In addition, John Dixon, who masterminded the erection Cleopatra’s Needle on the Thames Embankment, presented the V&A’s Architecture Department with a working model of the apparatus used.

This all seems pretty conclusive – and yet I can find no visual or documentary evidence that the cast of Cleopatra’s Needle was ever displayed at the V&A! Why would the museum go to the effort and expense of taking a cast and not follow through with its promise of placing it in the Cast Court, where it would stand in impressive counterpoint to Trajan’s Column?

It is a riddle worthy of the two ‘faux-Egyptian’ sphinxes that flank the Needle’s plinth. 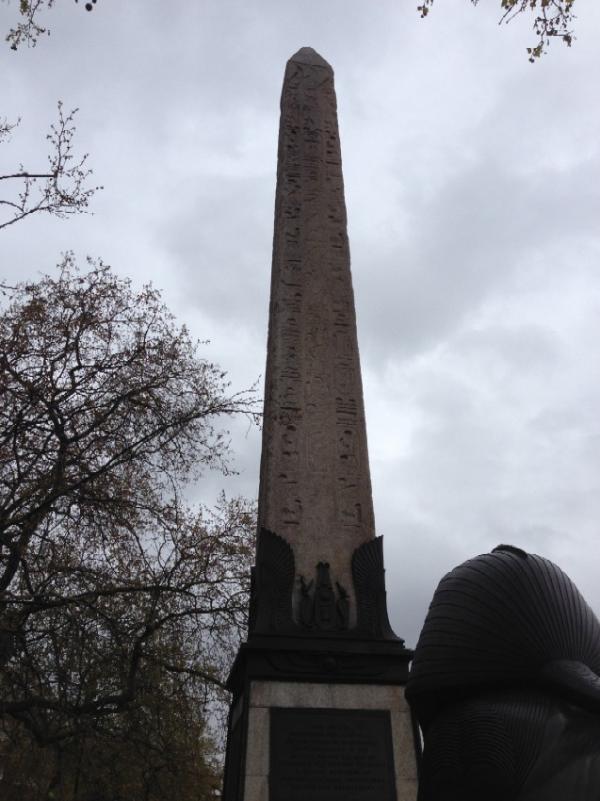 Why the adjective ” Hoary ” to describe Captain Henry Carter? He wasn’t grey or old, his air was black and he died at the age of 43. As related to him I find the term inappropriate.

Thanks for reading my blog and sharing this additional information about Captain Carter. Nick

Can anyone work out the name of the signatory of the Minute Paper? Looks like Richard ……?

The signatory was Richard A Thompson. There are a few biographical details about him in this blog: https://www.vam.ac.uk/blog/factory-presents/international-womens-day-historic-women-va

Thank you Nick, much appreciated.
Linda

Hello Nick, it has been quoted in a book that Prince Albert is responsible for saving Cleopatra’s Needle and placing it on the Embankment. Do you know if there is any truth in this?

I am yet to find supporting evidence for this and the dates don’t seem to fit.