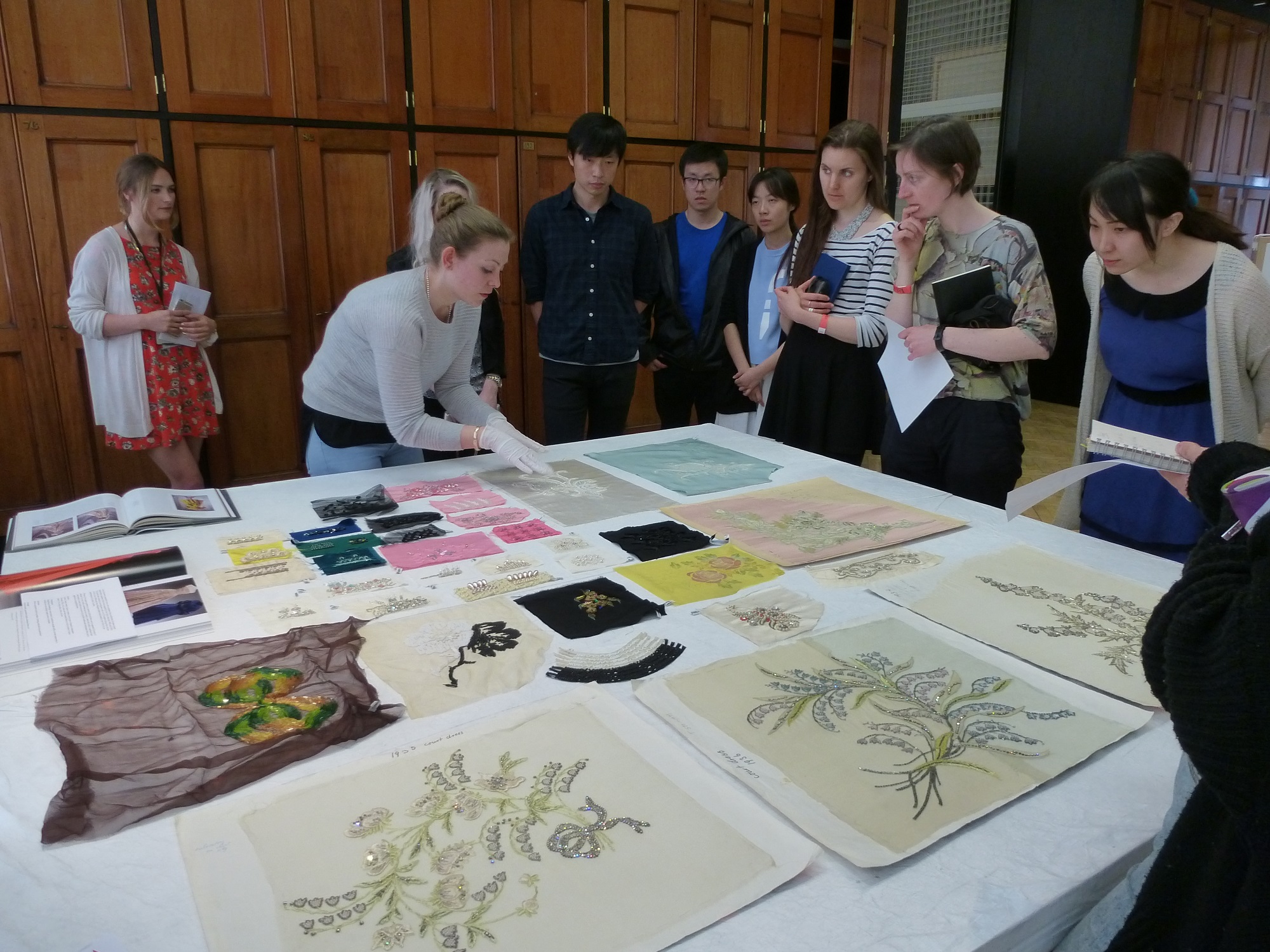 At the end of May we welcomed visitors to a series of talks given at the Clothworkers’ Centre by V&A staff, the second of our Clothworkers’ study days. In these talks, we showcased some of the research that we’ve undertaken within the grand tiled walls of Blythe House. As in October, the talks were extremely varied, highlighting the range of the collection and the diverse interests of the individuals who help run the Clothworkers’ Centre. Here is a whiff of what we spoke about:

For conservation reasons, the V&A is rarely able to display kimono as they are actually worn, and so are usually mounted on T bars. The art of wearing kimono, kitsuke, is rather complicated, and requires numerous pieces, such as obi, obi age, obi jime, obi dome, han eri, tabi, zori and those are just the visible parts! This has meant that today kimono are mostly worn on formal occasions and styled by professionals. However, in recent years there has been a kimono revival spearheaded by designers such as Mamechiyo of Mamechiyo Modern, from whom the V&A acquired this kimono set in 2011. Inspired by vintage styles of the early 20th century, Mamechiyo seeks to make kimono fun and accessible, thereby ensuring that it remains a living art, rather than simply a tradition of the past.

A Casket of One’s Own: Young Women and their Embroidery

In the late seventeenth century, embroidery skills were the essential mark of an educated young woman. Early training and small hands could produce absolutely astonishing work. Martha Edlin (1660-1725) made her first sampler when she was only 8; by the next year she tackled a more challenging piece of cutwork- made by cutting individual threads out of the linen (T.433-1990 and T.434-1990).

The ultimate demonstration of all the skills a young woman had learnt was a casket, a small chest covered with embroidered panels of her own work. Aged as young as 11, she would produce skilled and elaborate embroidery over pre-inked designs copied from popular prints. A cabinet maker would then mount the panels onto a wooden frame for her. Caskets are very special but extremely fragile objects, so we can only display a small number – including Martha’s – in the galleries under low light levels.

This means that we have a wonderful collection at the Clothworkers’ Centre. My favourite is probably an even finer example than Martha’s. Made by a young woman from the Smart family in Norcott Hall, Hertfordshire, it was kept in a protective case for most of its 350 year life, and so is in exceptional condition, with fantastically bright colours.

Even as a young woman from a wealthy family, it is likely Miss Smart wouldn’t have had much space to herself. Her caskets would have held her small treasures- jewellery, cosmetics, letters, sewing tools (and her secrets!). Caskets often had hidden compartments – this one has five. I’ve found by comparing our collection that these compartments are usually in similar places. Remember that Miss Smart’s mother probably also made a casket as a girl, so would have known exactly where to look for anything her daughter was hiding!

This illustrated, topical fan dates from 1734, and is extremely typical of the eighteenth century. What appears to be a scene of card playing is actually commentary on the political goings-on of the day, during the War of the Polish Succession. Women used fans as fashion accessories, but they could also use them to display their political opinion. Fans enabled women to comment and participate in political events. The imagery on the fans were open to interpretation, and fully depended on where they were worn, and how they were used. Interestingly, the fans often had a different design on the reverse, so they could be changed if the opinion shown was an unpopular one. Topical fans tended to be very cheap, because they were intended to commemorate a particular moment in time, and then be replaced. It’s quite interesting to think why this particular one did survive, when so many others were discarded! Sadly, we cannot now ever know why this was saved from the fire or the bin.

Kantha is the name given to a type of embroidery that came from the heart of domestic life in Bengal, the area of South Asia now divided between modern day West Bengal and Bangladesh. Kantha is also a story of recycling. When cotton saris and dhotis (the day to day clothing of Bengali people) wore out, women in the home would piece layers of the old cotton together and use the coloured threads of the sari borders to sew these together with embroidery formed of simple running stiches, painstakingly built up to form patterns and figurative motifs. This type of quilting created large items for the home, such as bed covers and floor mats, as well as smaller textiles to cover books and other precious items.  The images these women embroidered onto the quilts reflected their daily life and the environment in which they lived: the fish brought home for supper, the boats their husbands and sons worked on, tigers and elephants from the forests, deities and mythological scenes. All these appear on Kanthas. The quilt I selected for the study day included some of these motifs, as well as rathas, shine-like chariots used for festivals, and ancient Indian symbols – the tree of life and the chakra.

Knickers and Niceties: An Introduction to Underwear

As our exhibition about the history of underwear opens in under a year, the Study Day seemed a good moment to take a look at some of the pieces and themes which will feature in it. As well as comfort and hygiene, the support and manipulation of the body is a key theme throughout the history of underwear. With that in mind, and to compare the changes in silhouette, technology and design, I chose some interesting items of underwear from the 1860s, 1920s and 1950s.

These examples ranged from a paisley print padded petticoat from the 1860s (worn both for warmth and to give volume to the skirt) to a bandeau brassiere from the 1920s, which aimed at keeping the bust flat. While we tend to think of corsets as cruel constrictors, many innovators of the late 19th century strove to prove that, if worn correctly and made in a suitable fabric, corsets were a positive addition to a healthy and active lifestyle. Aertex, which is now used in sports clothes but started its life in corsets, was a popular material for summer ‘health’ corsets as it allowed better ventilation for the skin. In contrast (though perhaps not so much as you would hope), I showed the group a waspie from the 1950s. The waspie – a belt-girdle usually made of boned elastic – was an essential tool to help the wearer achieve that exaggerated hour glass ideal of Dior’s ‘wasp waisted’ New Look.  So, Kim Kardashian’s waist trainer might not be advisable, but it is certainly nothing new…

In the Textiles and Fashion Collection there are over 260 embroidery samples designed by Eveline Gordon. These designs were intended for dress and worked in-house for London Couture Houses, mainly for Worth. Dating predominantly from the 1930s and ‘60s, these samples document the materials, craft and design ingenuity which was to create the finishing touch on many-a-Haute Couture gown of the day.

Starting in the business at the age of sixteen (around 1920) Gordon worked for several Houses during her career. By 1948 she was in charge of the Embroidery Department at Worth’s London House. A key figure within this House, Gordon remains, like many others, a relatively anonymous contributor within the fashion industry. Only one piece of clothing in the Textile and Fashion Collection, a wedding dress designed by Owen Hyde Clarke for Worth in 1961, is attributed to the embroiderer Eveline Gordon. Two more of my favourite examples I’ve linked to below:

For my talk, I thought it would be interesting to show two objects which are not in a displayable condition. The objects are raincoats: a silk example from the ’20s by H. Ketchy; the other is cotton, from Westwood’s 1991 collection, Portrait. Both were made waterproof by the application of vulcanised (i.e. stabilised through heating and mixing with sulphur) rubber on the reverse. Sadly, on both coats, the rubber has degraded, becoming very brittle, making the raincoats very stiff ‘crispy’. Neither could now be mounted on a mannequin, fully-opened safely, both shed a light ‘snow’ of cracked rubbery dust.

At this time there is no effective solution to these coats’ shared problem. The silk example in particular is extremely nice, silvery and chic, and shaped like a snow angel, and would have looked brilliant in a display (like, for example, my rainwear display, in the fashion gallery ’til October). However, far from being ‘dirty secrets’ of the V&A, these two garments, made seventy years apart but united by their material properties, are valuable insofar that they offer an insight into what might befall even the highest-end fashion objects when made using materials of dubious long-term stability. Museums now face a period of soul-searching as they try to tackle problems arising from the long-term instability of industrially-manufactured modern materials, and how these could be represented if the objects begin to fall apart.

To find out more about the Clothworkers’ Centre for the Study and Conservation of Textiles and Fashion, including how to make an appointment to view objects from our study collection, please see the V&A website.

Hello there, thanks for reading and for your interest in visiting the Clothworkers’ Centre. We usually require at least four weeks’ notice when taking bookings, plus a list of specific objects that you’d like to study. Please refer to our website for further details: http://www.vam.ac.uk/page/c/clothworkers-centre/