In July 2014, preparatory work began on the mounting of historical dress for the new Europe 1600-1815 Galleries. As part of V&A FuturePlan, around 1,100 objects of European art and design have been re-displayed in the restored south-east wing of the museum, featuring star pieces and new acquisitions from the Textile and Fashion collection. Appointed designers ZMMA, fashion curators and textile display specialists liaised extensively to discuss themes, mounting options and the overall aesthetic of fashionable dress which has, up until now, been omitted from display throughout the seven galleries. Particular challenges arose with the mounting of men’s eighteenth-century dress in a unique display within Gallery 1 entitled ‘Fashion’.

The display incorporates four fine examples of late eighteenth and early nineteenth-century dress: two male and two female, which encapsulate the theme of ‘revolution to empire’. The two male ensembles include an elaborately-embroidered French court suit (T.148A-B-1924) which demonstrates restrictive courtly traditions, while a practical plain wool suit (T.10:1-3-2010) illustrates a growing informality and democratization in men’s dress. Both suits date from around 1780 to 1800 and consist of a coat, waistcoat and breeches. The four ensembles are positioned through the centre of the gallery at floor level, within individual glass cases, rather than elevated on conventional display plinths. The vision for the display was to make it appear as if the ensembles were promenading through the gallery, complemented by Glasbau Hahn case design that would allow visitors to walk upon the same surface as the objects.

The Textile Conservation Team presented a range of mannequins and different approaches towards mounting that would embody this vision and be suitable for fragile garments over a long display period. Mannequin selection began by focusing on the male torso, as this would be the minimum form required to mount the garments three-dimensionally. From here two different approaches were considered. Curators were in favor of full-figure mannequins in order to convey a complete historical silhouette. By adding to the basic form with the suggestion of arms, hands, heads and even hair, a sense of body, character and, most importantly, movement could be created. Alternatively, the designers suggested exploring more discreet mounting methods, in keeping with the design ethos of other displays. By removing all recognizable parts of the figure such as arms and legs and therefore creating a cutaway ‘invisible’ mount, the emphasis would be entirely on the object itself, helping to focus the visitor’s eye. The two different approaches posed an interesting mounting challenge: how to incorporate movement within a visually minimal mount.

The pose of the mannequin was crucial in order to capture a sense of motion, however it was recognized that this would be difficult to achieve without the inclusion of limbs. Without legs in particular, an obvious void from the breeches to floor level would be created as the style of knee breeches finish above the calf muscle. Furthermore, to fix a cutaway form into the display case, metal poles would have to be secured through the legs of the breeches into the floor, as a hanging mechanism was not a viable option. However discreet the metal poles, it was felt strongly that this type of fixing would be conspicuous, unsightly and detract from the elegance of the objects. With differing opinions amongst the team on the benefits of full-figure mannequins versus cutaway forms, a compromise was reached: to create a mount that would be unobtrusive, yet representative of a graceful male figure. Full fibreglass legs would be used and essential fixings hidden within the feet. Adjustable arms would also be included to suggest movement, but no hands, heads or other components of the mount would be visible.

Selecting an off-the-peg modern mannequin can be problematic as they are often too large to fit historical dress and vast alterations from reducing to re-sculpting parts of the form can run into costly and time-consuming work. Fortunately, Textile Conservation had previously worked with mannequin manufacturers proportion>london to create a new male figure which was used for the V&A’s 2013 ‘David Bowie Is’ exhibition. The bespoke sculpted figure is particularly slender with a sloping narrow shoulder line. It was found that both suits fitted the mannequin at two crucial measurements – the calf circumference and across the shoulders. This made the figure the perfect starting point for adaptations (Figure 1). 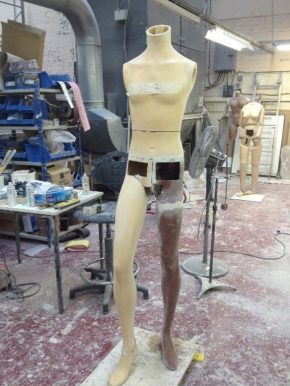 Using historical references (Figure 2) and measurements taken from the breeches, two different stances were created that would give the impression of the figures in stride. To achieve a sense of motion through the arms, bendable aluminum armature wire was fixed beneath the shoulder line and encased in soft sleeve supports. This gave some flexibility to posing the arms after the garments were fully mounted. The torso shape was further defined with graded layers of polyester wadding to make a conical profile and slim silhouette. Soft underpinnings were also made to interleave between the layers of the waistcoat and coat, to minimize friction and create a smooth fit. Due to the fragility of the ensembles, the final stance and range of gesture achieved was more limited than at first anticipated, however the use of legs created a subtle pose and enhanced the interpretation of the ensemble, emphasizing the tight fitting breeches and tailored cut of the coat (Figures 3 and 4).

This project presented an opportunity to analyze mounting techniques for eighteenth-century men’s dress and combine two opposing methods. Ultimately, there is not one standard or ideal mannequin for historical dress and every project presents its own set of challenges. Balancing the expectations of designers and curators whilst understanding the limitations of fragile objects is an ever-increasing part of the textile display specialist’s role. Working as part of a collaborative team often means compromise but also creates an opportunity to push boundaries and engage with new ways of working.

I am grateful to Lesley Miller, Jenny Lister and Lara Flecker for their guidance and advice throughout this project. I would also like to acknowledge the ongoing collaborative work with proportion>london.

Europe 1600-1815 has been made possible thanks to the generosity of the Heritage Lottery Fund, the children of Her Highness Sheikha Amna Bint Mohammed Al Thani, the Friends of the V&A, The Selz Foundation, Würth Group, The Wolfson Foundation, Dr Genevieve Davies, William Loschert, the J Paul Getty Jr Charitable Trust and many other private individuals and trusts.