The start of Crufts at the end of this week seemed like the perfect excuse to search the Prints, Drawings, and Paintings collection for a selection of works featuring the nation’s most popular pet. Sadly, I couldn’t find any images of dogs playing flyball or competing in heelwork to music (doggy dancing, that is), but I’m pleased to say that there is a wealth of artwork featuring canines to see at the V&A.

Of particular interest are the works of Edwin Henry Landseer, who is most well-known for designing the lions around Nelson’s Column in Trafalgar Square. His skilful canine paintings helped him to achieve such fame that he became the youngest person to be made an  Associate of the Royal Academy, and was commissioned to paint multiple portraits of Queen Victoria, Prince Albert, and their family. 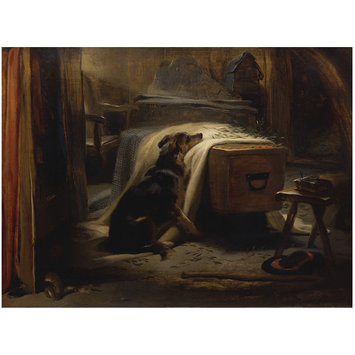 This piece is a particularly emotive example of the type of oil paintings featuring sentimental animal scenes that were popular among the Victorians. Engaging with another Victorian preoccupation – namely, death – this painting makes evident  Landseer’s talent for endowing animals with human emotions. 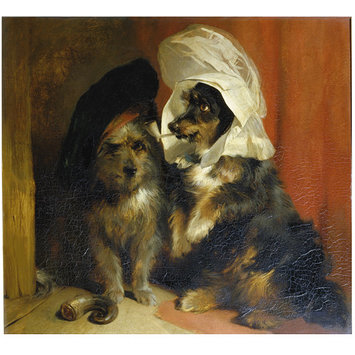 After the first image, it comes as a relief to see that Landseer also painted dogs in more light-hearted situations. As a critic for the Examiner pointed out in 1836, a lesser artist would have made the dogs seem aware of their unconventional appearance. However, these wire-haired terriers seem perfectly at home in the tam o’shanter and lady’s bonnet that they have been given. 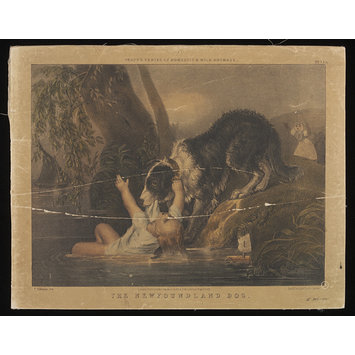 This lithograph, published as part of a series by Thomas Varty, shows a dog in a slightly more dignified role. This Newfoundland can be seen heroically rescuing a small child from a river, into which she probably fell while playing with the toy boat on her right. A woman runs toward the scene, clearly frightened by the girl’s accidental fall. Perhaps the dog is a family pet, allowing us to imagine that the woman might find a particularly tasty bone with which to reward it for its bravery. 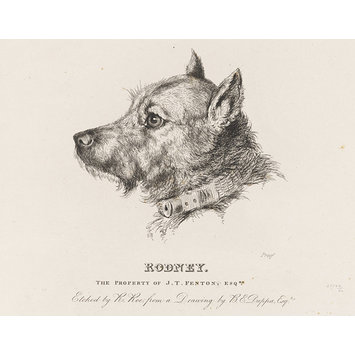 This dog, whose name we can see is Rodney, also appears to be part of a dog-loving family. He is shown with a stylish collar, emphasizing his status as ‘the property of J.T. Penton, Esq.’ However, this etching has been executed with all of the care of a human portrait, and Rodney has been given the expressive, alert expression of a faithful companion. What qualities of your pet would you like to capture in a portrait? 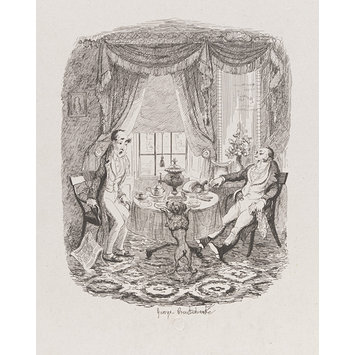 Of course, pets aren’t always as calm and well-behaved as Rodney appears to be in his portrait. This etching was produced as an illustration for Charles Dickens’s collection of stories Sketches by Boz, and it depicts a rather more mischievous little dog.  One man seems so shocked by the dog’s attempt to snatch food from the table that he dropped his newspaper to the ground, while another is rather amused by the situation. 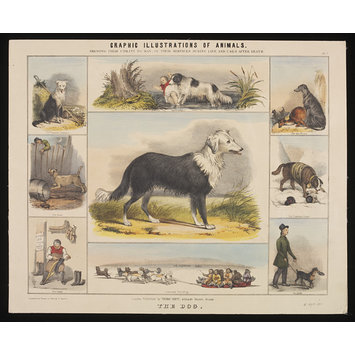 Finally, I think this lithograph is a fitting tribute to the special relationship between dogs and humans. Here, they can be seen doing everything from pulling sleds and herding sheep to guarding property and rescuing people from the snow. In the lower right, you can even see a seeing-eye dog leading his master.

I hope I’ve inspired you to take some time to appreciate man’s best friend. If you don’t have time to watch any of the canine action at Crufts (or even if you do), the Prints and Drawings Study Room has a wealth of dog-related works of art for you to see!