Established in 1852, the Museum was initially based at Marlborough House on the Mall in London and it was only in 1857 that it opened on its current site and was named the South Kensington Museum (being re-named the Victoria and Albert Museum in 1899). Work started on the site in 1855 and the Museum was a hive of activity from the moment it opened, with rising visitor numbers attracted to London’s new museum in what were then the outskirts of the capital. New buildings rapidly sprang up to accommodate the collections and visitors, and the Museum started to engage in ever-wider activities.

The V&A Archive holds a wide range of records for studying the South Kensington Museum’s history and in particular has some fascinating records of the first couple of years when the Museum opened at its new home. Some of these earliest records will be highlighted in this and subsequent blogs. For instance, a day book survives which provides statistics showing how immediately popular the Museum was with the public and also gives a glimpse of events and activities that occurred in the first couple of years. 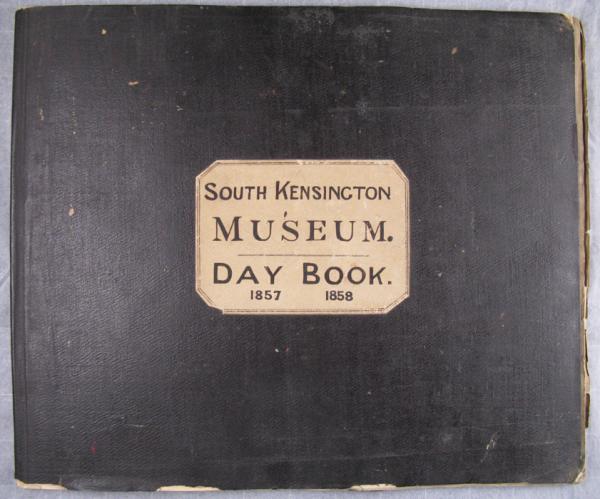 The Museum opened to the public on 22nd June 1857 and the day book records a range of statistics from the outset and for the next eighteen months, including the number of visitors to the Museum – on both the free days (when there was no entry charge) and the student days (when students came in free but the general public had to pay). In all there were 724,579 visitors in the eighteen months from June 1857 to the end of 1858 (which compares with the over three million visitors to the V&A during 2012). 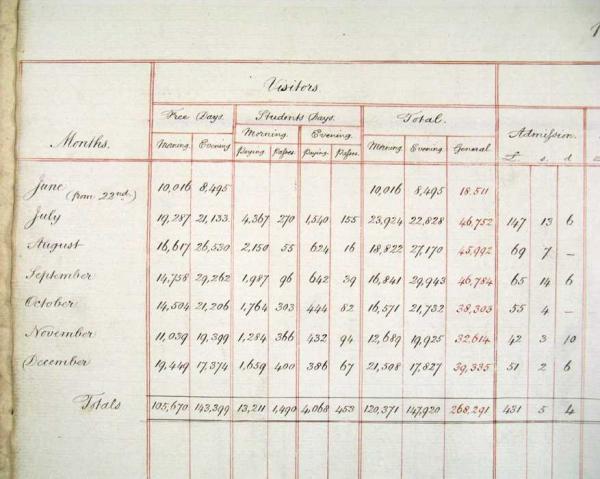 Return of Visitors and Receipts from 22nd June to 31st December 1857. V&A Archive, accession A0195. © Victoria and Albert Museum, London

The fact that visitor numbers were so substantial from the start vindicated Henry Cole’s strategy of moving the Museum from its original home at Marlborough House, where there had been only 111,768 visitors in 1856, compared with 268,291 in the six months that the South Kensington Museum was open in 1857. In his diary entry for Friday, 29th May 1857 Cole noted his ‘wager of hat with Mr Crace that more people came to Kensington in the first year than to Marlbro: Ho: in the last’, Mr Crace being the decorator John Crace. (1)

It is interesting that separate figures were recorded for the morning and evening openings, as Cole was keen that the Museum be open for workmen to visit in the evenings to improve their knowledge of art and design. The Museum was open from 10am to 4, 5 or 6pm (depending on the season), and in the evenings from 7pm to 10pm. Admission was free to the public on Mondays, Tuesdays and Saturdays, and on the payment of 6 pence they could be admitted on the students’ days which were Wednesday, Thursday and Friday. The Museum was, of course, closed on Sundays.

The day book also contains other detailed information about the Museum’s activities, such as the income from admissions and the Refreshment Rooms (from both the 1st and 2nd Class dining), and the sale of tickets and catalogues. Even the income from the Waiting Rooms (the Ladies and Gentlemen’s toilets) is noted, and the expenditure on the gas account! 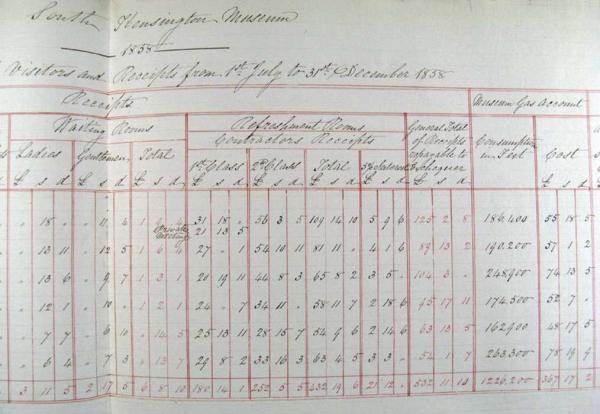 Return of Visitors and Receipts from 1st July to 31st December 1858. V&A Archive, accession A0195. © Victoria and Albert Museum, London

Details of the income from the sale of lecture tickets are also recorded. From the outset the Museum was provided with a temporary lecture theatre, as can be seen in an image below from the Archive. The day book notes the names of the lecturers and their subjects, and several important figures in the 19th century art world gave lectures in 1858. Lectures on architecture were given by architects G.E. Street, Sir George Gilbert Scott and William Burges, whilst designer Christopher Dresser gave a lecture on fine arts and art collections. There were regular lectures on the human form by the surgeon and anatomy teacher John Marshall, and one lecture on the ‘Class Mammalia’ by comparative anatomist and palaeontologist Sir Richard Owen, who was a key figure in the establishment in 1881 of the Natural History Museum as a separate branch of the British Museum. 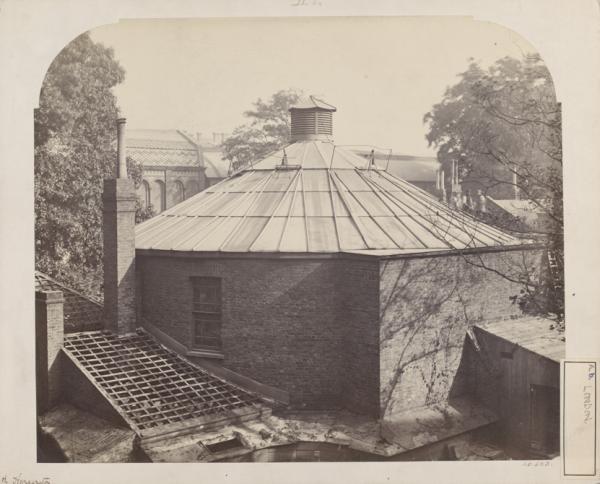 The First Lecture Theatre designed by James Pennethorne, from the north-west, with the Sheepshanks Gallery in the background. V&A Archive, MA/32/17 Guardbook, negative 4141. © Victoria and Albert Museum, London

One particular visitor is mentioned several times in the day book: Queen Victoria is noted as visiting the Museum on Monday 8th February 1858 to view the Museum and the designs for the Memorial to the Great Exhibition, and then again on Thursday 11th February to view the Photographic Society exhibition. This was the first photography exhibition held in any museum and was held in the upper rooms of the new Refreshment Rooms, the world’s first museum restaurant. 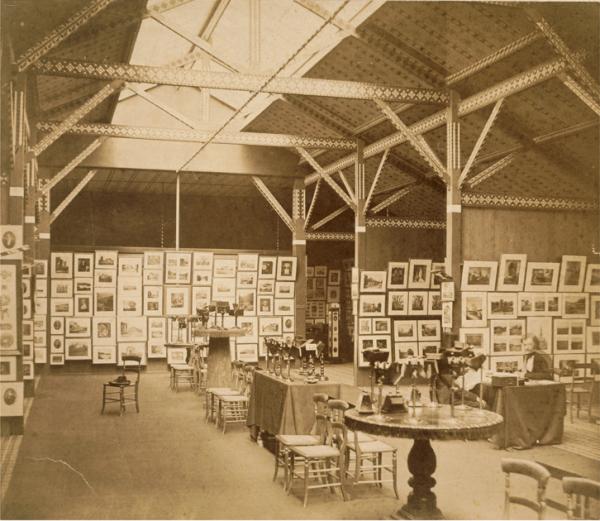 The day book notes that Queen Victoria was accompanied by Prince Albert on Wednesday14th April 1858 to open the Art Rooms on the ground floor of the new purpose-built Sheepshanks Gallery, designed to house John Sheepshanks’ magnificent gift of paintings. This building still exists on the eastern side of the John Madejski Garden and now contains Sculpture 1300-1600 (Rooms 26 and 27) on the ground floor and Sacred Silver and Stained Glass (Rooms 83 and 84) on the first floor. 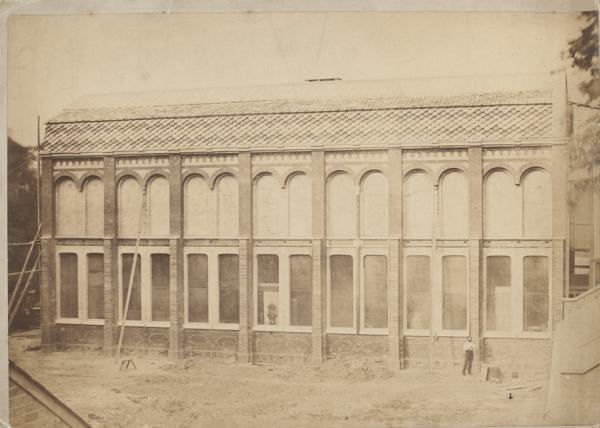 The Sheepshanks Gallery building nearing completion in 1858. This building was refaced in 1901 to make it match the buildings surrounding it and it now contains the galleries on the east side of the John Madejski Garden. Object number 73:374/A. © Victoria and Albert Museum, London

In subsequent blogs you can read more about these new buildings and the other records in the Archive relating to the first couple of years of the South Kensington Museum.