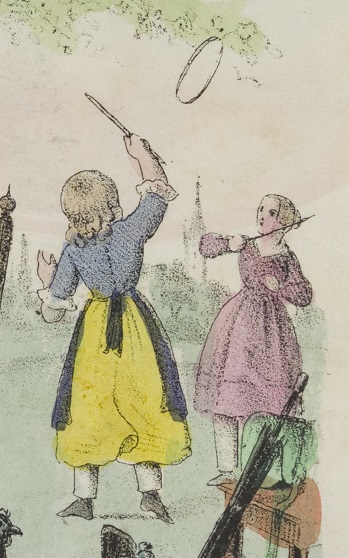 Guy Tristram Little’s 1953 bequest, which is described in an earlier blog post, The Saga of Letitia and Rachel, continues to throw up intriguing material. Much of what he collected was of an ephemeral nature and not intended to be preserved for posterity. However, that is what makes them so fascinating. Today, I’d like to talk about three hand-coloured lithographs by an anonymous artist, from a group of twelve that were probably published in Germany around 1850.

The idea of small boys playing with deadly weapons, unsupervised, is the stuff of modern horror stories. Definitely not something you would see today.  What is particularly interesting though, is what it is they are shooting at. Let’s take a closer look…. 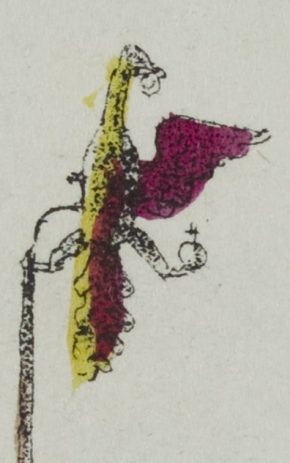 The brilliantly clear image (because our in-house photographer is just THAT good) allows us to zoom in close enough to see that it is a heraldic eagle, carrying an orb in its left claw. Heraldic eagles bearing orbs were part of the Prussian coat of arms, and also of the Russian coat of arms, although neither appears to match the colouring here. If it is a Russian eagle, it has lost one of its heads, along with its other wing. The missing wing can be seen lying on the table next to the boy shooting.

When you look so closely, it is clear how quickly a professional colourist worked. These mass-produced black-and-white engravings would have been coloured almost on a production line, with simple blocks of colour laid down, the lithography underneath providing tone and shadow.. The actual watercolouring appears very slapdash – although it’s worth remembering that the above detail is massively magnified – try staying within the lines when colouring hundreds of miniscule eagles!

As a fashion historian, it’s noteworthy how uncommon it is to see this kind of simple everyday children’s clothing from this period. Portraits usually show children in their best clothes, so it is interesting to see the loose smocks and coat-like tunics that young boys wore on an everyday basis.

The second print shows two young men playing chess under a tree, surrounded by children playing games. Again, on the left, we see little boys playing at war and parades, with their flags and toy swords. Perhaps a comment on how, as we get older, our favoured war games become more sedate and civilised – like chess?

The detail I’m going to pick out here is the two little girls on the far right who appear to be waving magic wands and holding a wizarding duel! (yes, I read the Harry Potter books…) 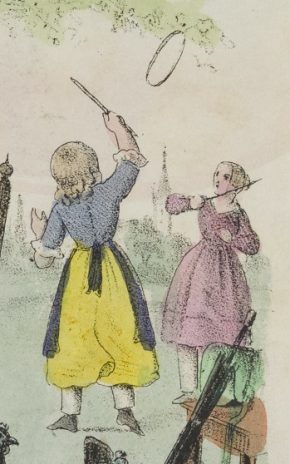 In fact, they are playing a game which involves tossing a hoop to each other, using their rods to catch it. This is a variation on a nineteenth century game which originated in Germany known as the “Game of Grace.” In the Game of Grace, each player holds a slim wand in each hand. They toss a hoop between them, trying to catch it on the crossed wands, before throwing it back. Described as promoting elegant and ladylike actions and movement, the Game of Grace was considered a highly suitable form of exercise for young girls. With only a single rod, the game must have been much more energetic and challenging.

The third print I’m going to focus on today shows soldiers in their camp. In contrast to the earlier war games, this is the reality of war. The soldiers hang about their tents, waiting for something to happen, whilst a vivandière pours drinks for them.

My first three posts to the Factory blog examined French prints showing vivandières, so I was delighted to spot another one in this German print. In contrast to the images I featured back in 2013, this vivandière is not wearing a feminised version of army uniform, but is wearing a simple pink dress, apron, green scarf, and shady straw hat, with baskets containing bottles and glasses and a practical bag attached to her waist. 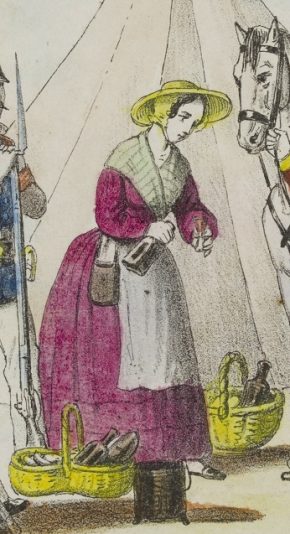 The role played by the vivandières (or cantinières) in war is a fascinating one, and still under-researched. My posts, two years earlier, (links here, here and here) barely touched on the subject. While French vivandières are the subject of extensive research by Dr. Cardoza (his website on the subject may be seen here) , the subject of these female camp-followers in other countries is as yet relatively under-studied. This newly-discovered German vivandière will take a much deserved place alongside the dozen or so French vivandières already known to be represented in the Prints, Drawings and Paintings collection.

This is one the best article I’ve ever read on customer service ever. In simple words you just clear all the questions which will help us in deal with customers queries. Live chat is way to get new customer Mobile Strike gold hack