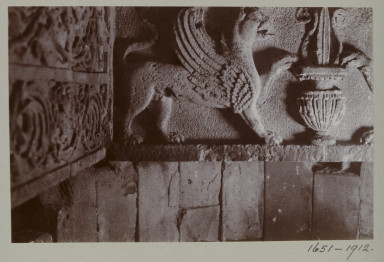 Here at the V&A we have recently found a small number of photographs taken by the writer, archaeologist, and political administrator Gertrude Bell. These came to light when the recent destruction of Iraqi cultural sites prompted us to look through our collection to discover if we had any images of the places which have been damaged or destroyed. These photographs show the ancient palace of Hatra, which was built over two thousand years ago by the Seleucid Empire, and which was damaged to an as yet unknown extent on the 7th March 2015.

What comes across strongly in accounts about Gertrude Bell is that she was confident and intrepid individual. On a mountain face, or in a desert sandstorm, or at a meeting with royalty, she was sure enough of herself, her position in the world, and her knowledge, to survive unharmed. The daughter of a wealthy industrial family, she had the financial support to embark on her many travels, and sufficient intelligence and fierceness to sidestep traditional female roles of the time. We know a lot about her due to her large collection of diaries, letters, books, articles, and photographs, most of which are now held at the University of Newcastle.

Gertrude Bell took these photographs with her plate camera in 1911, on her third major journey across the Middle East. At the point these were taken, Gertrude was 43, and had already published several books, travelled extensively in Iran, Turkey, Syria and Palestine, and had recorded ten mountaineering first ascents in the Bernese Alps. She had a first class degree from Oxford in Modern History, but had learnt how to undertake archaeological research from experts she met in the field, such as D.G. Hogarth and Sir William M. Ramsay. She therefore quickly learnt how to analyse sites and record findings accurately via notes, drawings, and photographs such as these, and she also became a skilled cartographer. It was during this period that London museums were encouraging explorers and archaeologists to take papier mâché moulds of historic carvings and sculptures, so that they could be brought back to England and plaster casts could be made from the moulds. Gertrude Bell also learnt this skill, and we have some casts made by her in our stores.

After the trip in 1911, when these photographs were taken, Gertrude went on to undertake another major journey across the Middle East to Ha’il. On the outbreak of Word War I she first worked in the Wounded and Missing Enquiry Department of the Red Cross in Paris, then was summoned to Cairo to work for the newly formed ‘Arab Bureau’. The Bureau came to rely on her expert knowledge of the local tribes and geography of the area. The stated British policy aim at this post was to engender an Arab uprising against the Turks, in order to undermine their support of Germany and thereby assist the war effort. The British promised independent Arab rule in exchange for the tribes uniting to fight the Turks, but many British diplomats privately were of the opinion that independent rule was not possible. Gertrude, however, felt this was both achievable and desirable, and did all she could over the next six years to create that eventuality. By 1921, her extraordinary efforts paid off, and the state of Iraq was formed under King Faisal I. Gertrude’s role in this cannot be underestimated. Her writings show an abiding love of the area and people, as her curiosity meant that she met and formed friendships with many tribal leaders, sheikhs, and people from all walks of life in the Arab world, and was able to gain unprecedented access -this knowledge was key in her later political work.

In 1922, she was made ‘Director of Antiquities’ in Iraq, and in this role she came to create the Iraq Museum, and was able to return to her love of archaeology. She was one of the Art Advisors on Mesopotamian archaeology to the V&A and the British Museum, and she was instrumental in the small finds from Ernst Herzfeld’s excavations at Samarra being shipped to London. (These are still actively being studied today, and you can find out more about recent research here).

Bell died on the 12th of July, 1926, and was buried in the British cemetery in Baghdad.

Though well-known in her lifetime, Bell’s fame was later eclipsed by her colleague T.E Lawrence (‘Lawrence of Arabia’). In recent years, however, interest in her has resurfaced, with several biographies being published, and a forthcoming film about her being released by director Werner Herzog. Interest in her scholarly output has also been increasing, given the current risks to many of the sites she recorded in the Middle East.

Her life story is an adventurous one, and well worth investigating in more detail than I am able to cover here. As well as the recent sources above, many of her own books remain in print. (You can visit the National Art Library to read the original editions). You can view the photographs by Bell we have in the V&A’s collection by making an appointment to visit the Prints and Drawings Study Room.

I read with great interest of your findings of Gertrude Bells Hatra Photographs. She was an incredible woman whose achievements have had lasting effects on many areas of the world and in human life.
I’d like to draw your attention to a documentary which is currently in its finishing stages about Gertrude Bell called Letters from Baghdad.
The documentary is based on her letters and photographs using primary source material and never seen before archival footage of the Middle East at the dawn of the 20th century. For more imformation go to our website: http://www.lettersfrombaghdad.com
If the V & A has any additional material from Gertrude Bell aside from what can be found at Newcastle, one of our partners in the film, please contact us.
With best wishes,
Sabine Krayenbühl (co-director “Letters from Baghdad”)

Very interested to read this. Am currently in my fifth month retracing Bell’s travels in Turkey and plan to write a book about the experience afterwards. http://www.followingmissbell.wordpress.com.

I’m delighted to hear about the documentary Sabine! Gertrude Bell deserves better recognition, and hers is such an incredible story – with such effects on the world, as you say. I’m afraid I’m not aware of any further material we have hear at the V&A relating to Bell (the University of Newcastle certainly has the most material, as you’ve mentioned) but if I come across any here I will post about it and also let you know.

Hi Pat, that sounds like a great adventure! If I find anything here related to Gertrude Bell’s Turkish travels I’ll post it here. Thanks for commenting!