A Museum without Staff and Visitors is simply a large building with (mostly) nice objects, with no-one looking after them, or studiously appraising them.

It might be a little like this… you would expect, even very early in the morning, somebody, anybody, to be walking the pavements, travelling in very expensive motor vehicles, as seen here in 1926, but there is no-one….. at all…..

Of course a museum obviously has staff & visitors, and in this blog, from the Photographs section, the Guard Book archives (MA/32) and the Museum Archives (MA/22) I will be looking at a few of the many people involved, from the early part of the museum`s history, the twenties, through to the Second World War, to the early fifties.

The Museum of course had to first be constructed, old buildings demolished, new galleries built, sometimes, in light of our current approach to health & safety, seem quite daring, or should that be scary… as seen below..

Just in case you don`t think that is scary..here is a closer look… 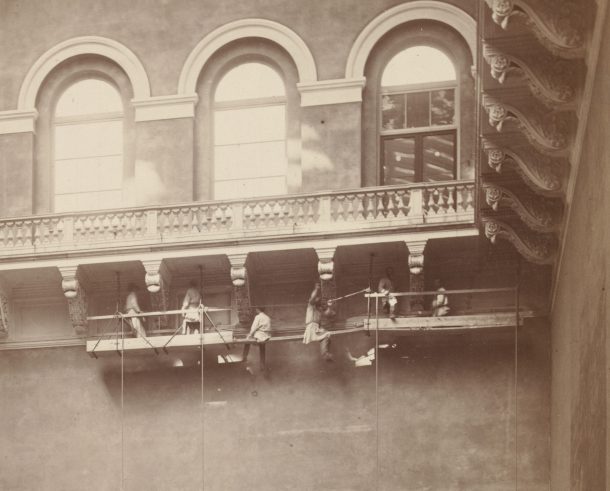 Indeed there was actually a Police Hut, complete with ivy at the entrance in 1891.

In 1899 a temporary wooden structure at the corner of Exhibition Road and Cromwell Road was constructed for the installation of The Foundation Stone, with seating to accommodate the Royal Visitors.

We move forward now to the opening of the Eastern Hall, were once again we see in the foreground a warder(police uniform) during its construction in 1909, surrounded by scaffolding.

During all this construction of the new parts of the museum, activities and learning were taking place, in what is now Gallery 100, the Members of The Education Board are seen assessing works, in what was called then The Competition Gallery, the image below is from an enhanced scan of Negative 9244, from May 1871.

..and in 1897, the activity of Life study classes were taking place in the Lecture Theatre, in conjunction with the National Art Training School.

In the twenties, guided tours were popular as they are now, as seen below with here a Guide Lecturers.

The museum has also had a close relationships with art students, in particular with the Royal College of Art, which were in the main building up until 1991, in what is now, the still called …er…the RCA Block.

An artist in the Galleries….

Museum staff have always had to appraise items, sometimes from other museums, such as the ones from Melbourne Museum;

We have also seen that the police uniform here was used for warders, but in 1922, a new uniform appeared, as smartly presented, complete with medal ribbons, by the proud warder below.

There are other unsung members of staff in the background of the museum, like the ladies below, from the Museum Typing Pool,

A Time of War

Staff during a time of conflict have to pull together in a common cause, during the Second World War, staff were involved in a large number of activities to protect & preserve the museum collections by moving them away from the South Kensington site to other locations, or by making sure they weren’t damaged by the conflict.

All the images below show the work that happened…. and these are only a small selection….

….. this situation may soon become all too familiar….. !

….though there is a time for laughter…

with during World War II, the most Unfortunate Nose Shadow in a Photograph goes to

…and some fun with sandbags….

…it’s the people that matter.

You can play all the sonic games online without any registration or download.