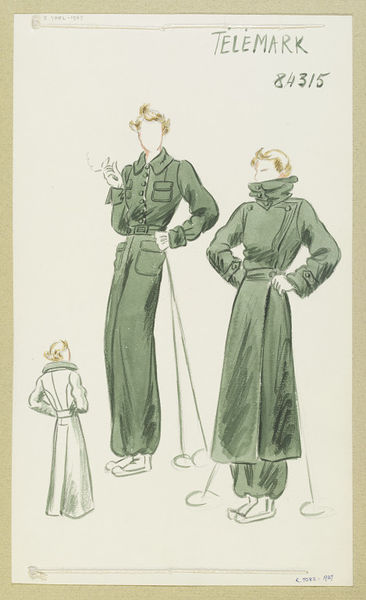 A common perception of haute couture is that it is about glamorous evening gowns and special occasion day wear. These days, perhaps that isn’t so far off the mark, but there was a time when couturiers produced clothing for almost any occasion that a lady might require special garments for. Some establishments, such as the late nineteenth-century tailoring house of Redfern, specialised in the design and manufacture of riding habits and sporting dress for elegant ladies (including the future Queen Alexandra). Redfern went on to become a couture brand, producing exquisite evening gowns and beautifully tailored daywear. The Museum’s fashion collection has a fine collection of Redfern garments from the Heather Firbank wardrobe (click to find out more about the V&A publication about Heather and her clothes!). Also from Heather Firbank’s wardrobe is this rare survival of a ultra-fashionable sporting costume, probably worn for golfing, which was designed and made by Frederick Bosworth, who used to work for Redfern. As any fashion curator will tell you, clothing designed to be actively worn or for an everyday basis survives in far less quantity than special occasion garments which might only be worn a few times and then carefully packed away.

There are quite a few examples of sporting outfits in the Paquin design books, and I am going to showcase some of the best examples here:

By 1905, motoring was an incredibly popular pursuit for the wealthy and fashionable. The lady motorist in her all-enveloping ‘duster’ coat, heavily veiled hat and goggles became a popular visual. For Summer 1905 Paquin produced a brown duster and hood, which she christened “Gordon Bennet” after the motoring enthusiast James Gordon Bennett Jr (1841-1918), publisher of the New York Herald. Gordon Bennett (so-called to distinguish him from his father) sponsored a early motor-racing trophy, the Gordon Bennett Cup, in the early 1900s, along with other trophies, including the Coupe Aéronautique Gordon Bennett, a hot-air-ballooning race which still continues today. The 1913 motoring coat with hood follows the slimmer silhouette of the next decade.

With its warm hood, the intriguing costume above appears to be designed for winter wear, despite being offered for Paquin’s summer collection. It may even have been worn for skiing, for which a hood would have been more practical than a hat. Thirty years later, Ana de Pombo, the house designer for Paquin, was offering a forest-green skiing suit with long trousers and overcoat. Trousers for women were now more generally accepted as long as they were presented as part of sports or leisure wear.

Sportswear was not really a Paquin speciality, but it is clear that some of Paquin’s day outfits were intended to be worn for active purposes. The fashionably narrow skirt of this day ensemble has pleats inset into the side seams to enable the model to move around enough for a game of tennis. This was probably not designed specifically for tennis dress, but is clearly presented as suitable for the purpose. At the end of the day, many clients chose a particular couturier to deal with their evening wear, perhaps a favourite designer for daywear, and someone else to produce their sports and leisure wear. While the latter was not exactly a Paquin trademark, the House was clearly careful to offer these options to their clients through to the end. As late as 1950, Lou Claverie was offering a practical green and black skiing ensemble (with chic matching cap) called ‘St Moritz’ after the well-known Swiss ski resort alongside his chic skirt suits and extravagant evening gowns.