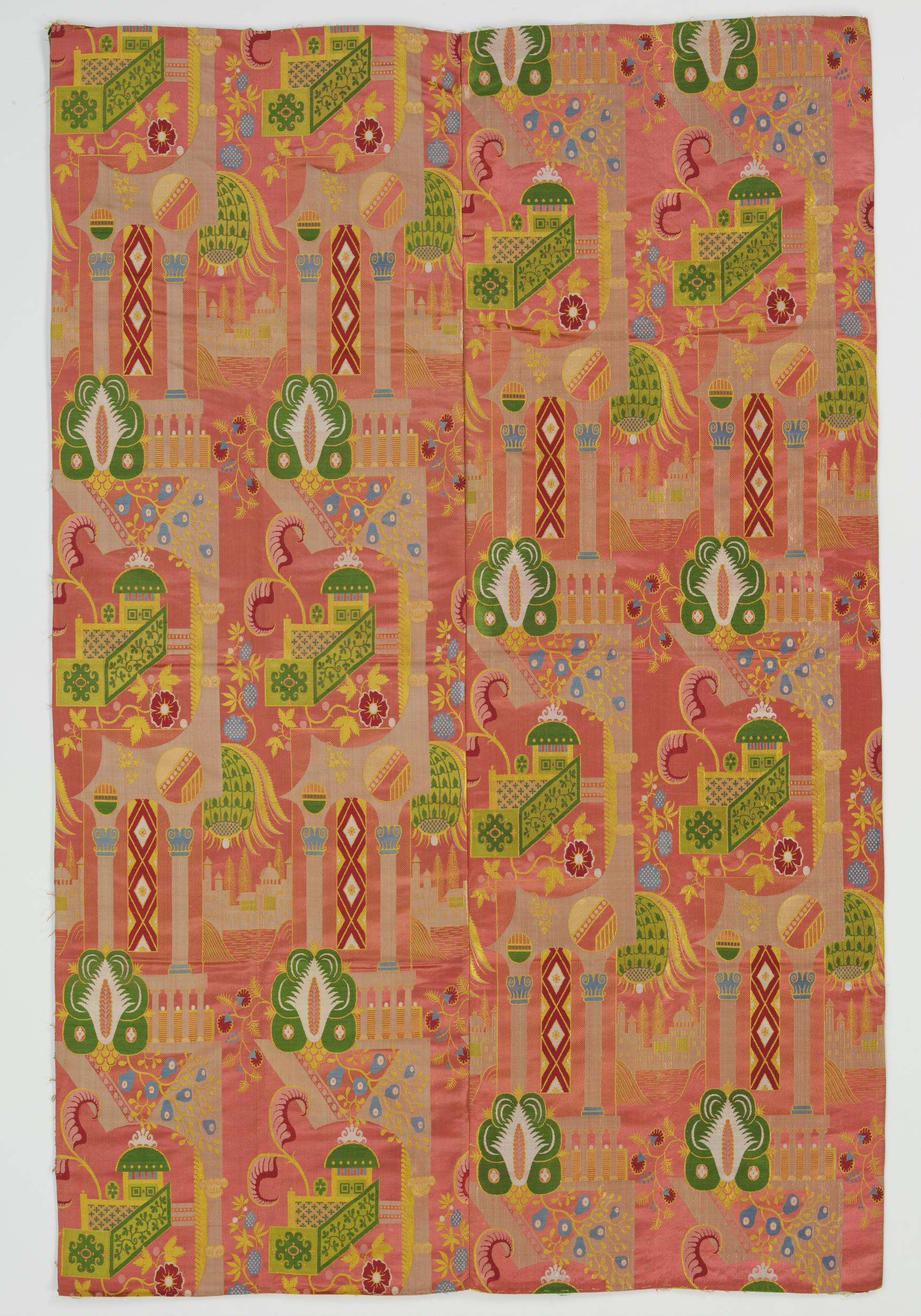 The Leman album, an enhanced facsimile, is one of the V&A Research Institute’s (VARI)first ‘named’ projects. Containing some 97 vibrantly coloured designs for woven silk by the second-generation Huguenot émigré, James Leman (b.1688), the designs were produced between 1706 and 1716.   They are the earliest known dated designs for woven silk and at some stage in their lifetime were collected together and adhered to support pages. These were bound to form an album, on more than one occasion, and when it was acquired by the Museum in 1991, it was not in its original binding.

The Leman album played an important part in the VARI pilot project, proving to be an ideal example of an object on which to model the potentials for collaborative research. It became the object in focus for numerous workshops that gathered together a number of people from different academic and non-academic disciplines including makers, archivists, conservators, scientists, social historians, curators and many more.  Drawing on different expertise, this project therefore brings together a core multi-disciplinary V&A team made up of paper and book conservators (Victoria Button and Jane Rutherston), curators of textiles and designs (Clare Browne and Olivia Horsfall Turner) and a scientist (Lucia Burgio) who will research and interpret the physical evidence of the album, the designs within it and an equally spectacular corresponding woven silk, also in our collection.  This main team has, and will continue to, collaborate with as many interested parties both within and outside of the Museum.

The ultimate aim of the project is to research, conserve and digitally reproduce the album to inform and inspire. The eventual digital facsimile will make a once inaccessible object available to a wide audience and contribute to the history of the silk industry in England, as well as the related craft of design and weaving. Research results will also establish important guidelines for the future care, storage and display of the designs and textile, both of which are sensitive to light damage.

Perhaps the most striking thing about these Leman designs are the vivid colours: an array of pinks; greens; oranges and yellows, as well as monotone red; purple and green. They are abstract as well as pictorial; some with fruits, flowers and architectural features or elements of all these that make up a swirling sea of colour and movement by a designer with a brilliant imagination.

Although there are many factors, both physical and chemical, which have in some cases affected their condition, in the main the colours remain as bright as the day they were created.  There are further features such as the addition of gridding; numbers and inscriptions that remind us that these were functioning designs with purpose and vision.

The album was dis-bound in 1999 so as to limit the damage caused by what was a 19th century, overly tight binding and to facilitate treatment and study.  Research, discussion and debate will inform the decision regarding its new housing in order to preserve the designs: for example if a new binding structure is appropriate so as to maintain its original format.

Visual, scientific, and historical analysis both of the designs and of the surviving textile has begun and each approach is crucial in discovering important cultural information regarding materials, techniques and the history of these designs in relation to the 18th century silk industry in England.  Being in possession of both designs and a corresponding textile, we are in a unique position of being able to investigate, understand and share information on how a design for weaving silk may have been translated into the finished textile.

This is the first of many blogs that will explore, explain and reveal the many fascinating potentials that this album and textile offers as the team and their collaborators carry out their research and uncover new information. Over the coming months, the project team and guest bloggers will add their own individual take on the album and the textile, providing different perspectives on these colourful objects, as well as the part they are playing exploration of them as they progress through their research.

The images you have shared of the Leman book are amazing. I have a family book with little scraps of silk and material written in French – nowhere near as vivid as Leman, but I wonder if you would be interested in seeing it? It has a few instructions on weaving and so on.

I am a V&A member – and my email is above so please do get in touch if you are keen. It is a fairly weighty tome but I am based in Hammersmith, so not too far to come.