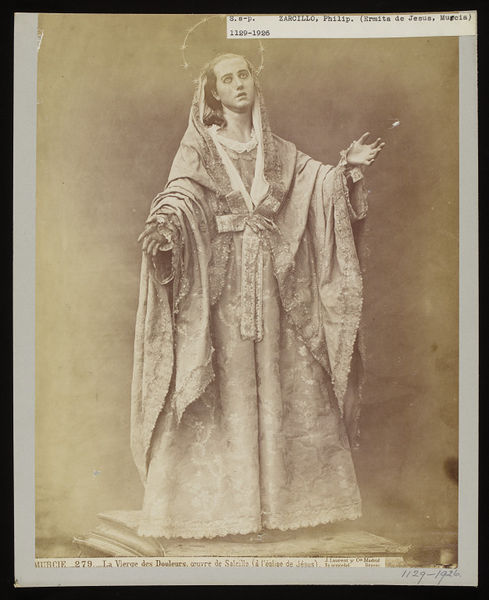 Today’s post is by guest blogger Chloe Sharpe, a PhD candidate in History of Art at the University of York, whose doctorate is funded by the White Rose College of the Arts and Humanities (WRoCAH). On her PhD placement project, developed within the V&A-WRoCAH partnership scheme, Chloe has been researching Sargent’s collection of Spanish photographs at the V&A. The placement involves cataloguing some of the photographs and writing this blog post and an article about them.

John Singer Sargent: the painter’s name brings to mind dazzling society portraits and scenes of contemporary life and leisure. What did Sargent want with a large collection of photographs of 16th-18th century Spanish religious sculpture? And what are the photos themselves all about? I spent my PhD placement in the V&A’s Word and Image Department finding out.

In August 1925, the V&A received a donation of 611 photographs from Emily Sargent and Violet Sargent Ormond, which had belonged to their late brother, John Singer Sargent (1856-1925). At the time, the photographs were valued as an educational resource, and they were soon separated and classified geographically according to their content. Curators at the V&A’s Word and Image Department have only recently rediscovered that they were all originally collected by Sargent. Over fifty of the photographs show Spanish religious sculpture, and my research project was an exciting opportunity to explore these in detail.

Sargent was fascinated by Spanish art and culture, and visited the country many times. His admiration for the paintings of Velázquez, and his interest in flamenco culture, are well-known. Meanwhile, his delight in the sunny gardens and landscapes of the south is represented in the V&A through a watercolour of a fountain in Granada (ca. 1912), donated by Sargent himself in 1921.

The religious photographs, however, tell a completely different story. Sargent collected photographs of altarpieces, church tombs and, most of all, processional sculptures, apparently purchasing them from professional photographers from different parts of Spain. The rest of this blog post will look into a small selection of these.

Processional sculptures have a long history in Spain, and anyone who has visited a Spanish city during Holy Week (the week leading up to Easter) will probably have become unexpectedly caught up in a religious procession. A 5-minute walk to a restaurant can easily turn into a 20-minute dash, as roads are completely blocked by several processions taking place at once. But the delay is well worth it, because this is a chance to experience a spectacular, multisensory religious ritual that has changed little since the 16th century.

The sculptures which are taken on procession over Holy Week were once commissioned by confraternities, brotherhoods of laypeople often attached to a particular church or chapel, where the sculptures would be housed for the rest of the year. 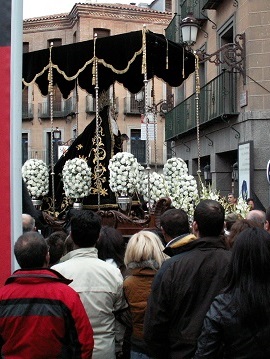 Still today, at the allocated time on a specific day of Holy Week, the same confraternities continue to be responsible for adorning the mounted sculptural groups, known as pasos, with flowers and candles, often carefully dressing the sculptures in elaborate clothes. Some of the confraternity members themselves put on distinctive costumes, and take the sculpture on long processions through the city streets, to the accompaniment of strong-smelling incense and specially-composed music.

We can catch a glimpse of some of these procession participants in a few of Sargent’s photographs.

Photograph 1079-1026, for example, shows a paso from the Church of San Jacinto in the Triana district of Seville, with some of the nazarenos, or “penitents” from the confraternity, wearing capes and the characteristic pointed headgear known as capirotes.

The photograph must have been taken just before or after the action, because during the processions the faces of these participants are completely covered to ensure their anonymity. Taking part in the procession in this role is symbolically an act of penitence for sins committed, so hiding the face is in keeping with the idea of humility.

Another photograph, 1084-1926, shows two serious-looking little boys, too young to be true penitents, but dressed in penitents’ costume nonetheless, posing on raised platforms alongside another paso from Seville. Cut off by the right-hand edge of the photograph, with his arm protectively behind one of the boys, we can spot one of the costaleros. The costaleros are the invisible physical force behind the Holy Week processions, the men who walk underneath the pasos and support their weight, hence the distinctive, padded headgear which we can just about make out in the photograph. Meanwhile, in the background, a blurred couple look on from the doorstep of a shop, while an elderly woman has stepped out onto her balcony to get a good view.

A third photograph from Seville, 1074-1926, captures a procession in action, with the blurred heads of the crowd and one of the guards of honour in a military-style cap. The sculpture was lost in the Civil War (1936-9), so Sargent’s photograph provides a valuable record of how it once looked.

The V&A library has a fascinating chromolithograph which helps to complete the picture by showing every aspect of an entire procession. This pull-out from a book of prints by M. Grima reproduces the procession of the Santo Entierro (Holy Burial) in Seville in around 1887, with its three sculptural groups and a vast array of different, costumed, official participants.

Only the costaleros remain hidden, though look closely and you can spot their feet poking out from underneath the fabric drapes of the pasos. The use of a pull-out was an ingenious way of conveying the temporal aspect of a procession. The viewer’s eye can move from the first to the last scene, imitating, though in reverse, the way in which spectators of a procession usually stand still while the action unfolds before their eyes.

Sargent’s fascination with the processional sculptures.

The “human” details which today’s viewers find so intriguing were not, it turns out, what most interested Sargent. In fact, most of the photographs do not include people at all, and even in the examples we have looked at, they are hardly the main focus of the image.

It was the processional sculptures themselves which Sargent was really interested in. These pasos were mostly carved from wood between the 16th and 18th centuries, though over time they have constantly been restored and updated. They represent events which led up to the Resurrection of Christ on Easter Sunday, or associated biblical characters, so that the processions re-enact what happened to Jesus and his mother in the first ever Holy Week. Sometimes, a paso would show a multi-figure scene, and a sequence of pasos could reconstruct the story. For example, Sargent owned several photographs of a series created in the 18th century by Francisco Salzillo, an artist whose Saint Joseph is in the V&A collection.

Salzillo’s pasos are now in the Museo Salzillo in Murcia. The scenes included the Last Supper, Jesus praying in the Garden of Gethsemane, Jesus’ betrayal by Judas, the Flagellation, Christ carrying the cross, and finally, the sorrow of the Virgin faced with the death of her only son (1124-1926 – 1129-1926). 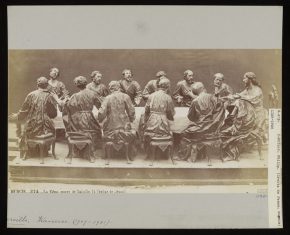 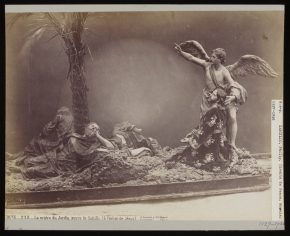 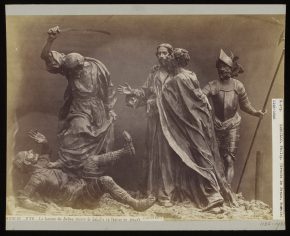 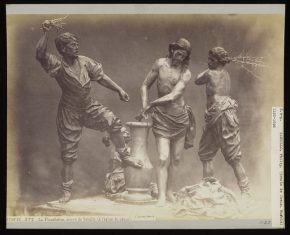 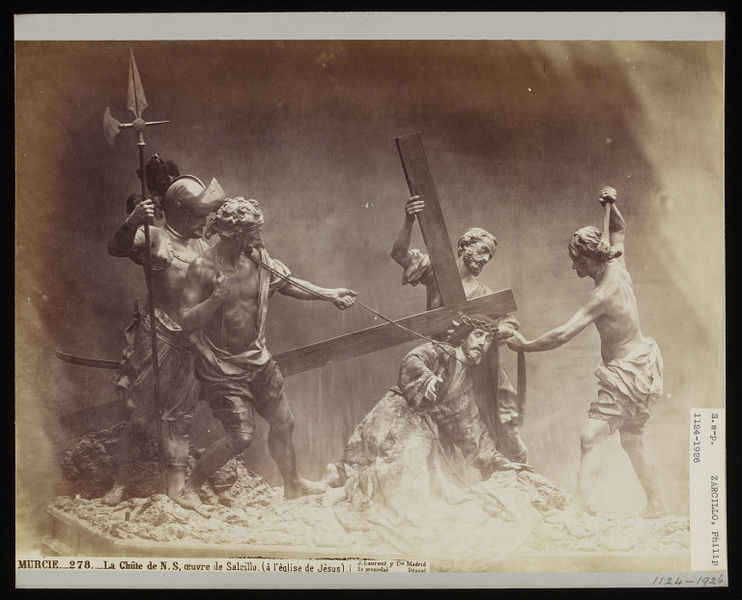 ThisVirgin of Sorrows was an imagen de vestir – a “dressable image” – meaning that her clothes, instead of being carved from wood like her face and hands, were purpose-made fabric garments.

The figures in Spanish processional sculpture were usually life-size and painted to look as real as possible, with glass eyes and even realistic looking tears. Sometimes, the limbs on these “dressable” figures were articulated, so that they could be made to change position. Here, you can see an example of an undressed, articulated sculpture, now in the National Sculpture Museum in Valladolid, standing in his underwear as though waiting to be dressed. Giving the sculpture moveable arms and legs meant that the same figure could be used to represent different scenes. This was the case with the sculpture known as Nuestro Padre Jesús del Gran Poder, made for a confraternity in Seville in 1620 by sculptor Juan de Mesa. Grima’s chromolithograph reveals how the whole paso looked in 1887, while Sargent’s photograph focused on the face of Christ (1065-1926).

Not only are processional sculptures moving objects with moveable parts, but they are also changed and adapted as time passes.

There are two photographs in the Sargent collection which show this very well. Both capture a paso belonging to the confraternity of Santa Marina in Seville: 1084-1926, which we saw earlier, and 1083-1926, taken in a different year, in which we can no longer see the sculptures of Joseph of Arimathea and Nicodemus occupied at the crucifix.

However, when the sculpture was taken on procession in around 1887, it had yet another composition. This time, as Grima’s chromolithograph reveals, only one of these two men appeared in the scene (standing just behind the Virgin, on her left hand side). Spot-the-difference has played an unexpectedly important role in my research!

The episode represented in this sculpture – a scene known as the Deposition – becomes truly alive in some processions in other parts of Spain. In one paso in the city of León, for example, it is not sculpted men who take Christ down from the cross, but real men; two members of the confraternity climb up the ladders and solemnly remove the sculpture of the dead Christ, in a ritual called the Desenclavo (un-nailing). It is difficult for photography to convey the essential element of movement, and the almost uncanny mix of reality and representation, experienced in these processions.

How did Sargent use the photographs in his paintings? We know that, in the 1890s, the painter was conducting research for his most ambitious project to date, the Triumph of Religion murals for the Boston Public Library. In 1895, he went to Spain to examine sculptures of the Virgin Mary, which is probably when he bought many of these photographs.

When he came to creating his own Virgin of Sorrows, installed in Boston in 1916, he clearly drew on the sculpted Spanish virgins in his photographic collection. For example, the tall, symmetrically arranged candles in the foreground of Sargent’s painting appear countless times in front of the processional virgins.

The striking motif of the seven swords piercing the Virgin’s heart was probably inspired by a sculpture in Salamanca (1924-1926). According to Catholic tradition, these swords each symbolised one of the seven sorrows which marked the Virgin’s life.

Finally, the crescent moon and blank, rigid facial expression of Sargent’s Boston Virgin recalls the photograph of Nuestra Señora de las Angustias, the patroness of Granada (1058-1926), a sculpture traditionally taken on procession not during Holy Week, but in September.

Finding such clear connections between Sargent’s work and the photographs he collected has been an unexpected outcome of what was already an exciting chance to explore these little-known objects. The photographs give us a glimpse of the artist’s working methods, revealing how he researched his works and drew from different sources to create his own paintings.

Many of the Sargent photographs are now available digitally via Search the Collections. They can be also be viewed by appointment in the Prints and Drawings Study Room.

Hello CHloe, Very interesting blog, full of ideas, really enjoyed reading it. Glad to see you are doing a ph d . I am now Visual Arts Editor of the Hispanic Research Journal so maybe one day you might consider us for a future article.
Let’s keep in touch,
Best wishes, sarah

Hello Sarah,
How wonderful to hear from you, and thank you for your comments!
I’ll write you a private email.
Best wishes,
Chloe