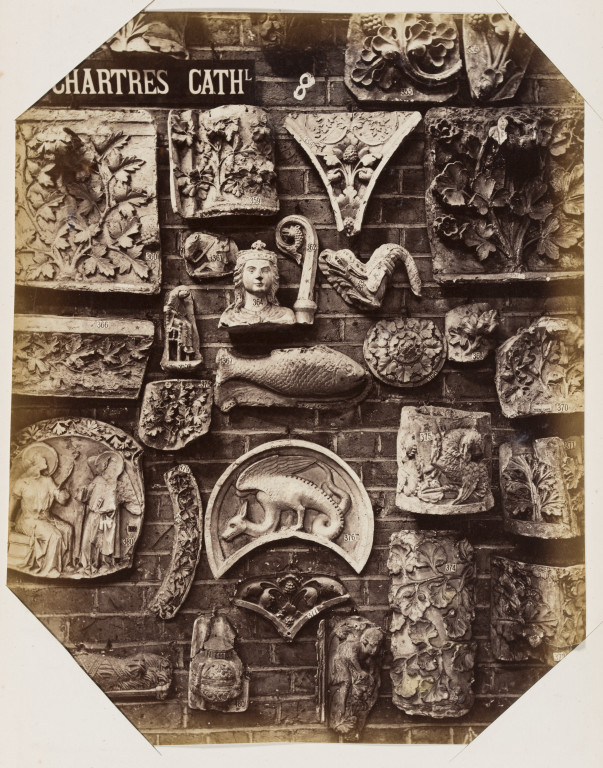 From its founding in 1852, the South Kensington Museum (as the V&A was first known) took a leading role in the reproduction of art works to serve as models for artists and designers. As part of this mandate, casts, photography and electrotypes were acquired and commissioned.

They were regarded as an essential part of the collection, educational tools, not only extending the visual resources of the Museum to artists and students of art and design, but also as resources for V&A curators and scholars.

The celebrated Cast Courts represent the ultimate expression of this Victorian impulse to replicate.  When they first opened in 1873, the two massive day-lit galleries which make up the Cast Courts were filled with copies of some of Europe’s most famous sculptures and monuments. Since 2010, a campaign to restore these unique galleries and introduce contemporary audiences to the Cast Courts is giving the public insight into this unique strand of the V&A’s history.

In the course of the project, researchers from various departments in the Museum have been searching the archives, making new discoveries relating to everything from the details of the galleries’ original decorating schemes, to the history of the fig leaf made to cover Michelangelo’s David.  To accompany this effort, the Factory Team have been seeking out photographs to support research into casts.

We recently discovered a collection of photographs which fit this brief in the National Art Library. Included in the cache was an album of 60 albumen photographs (with an additional 4 loose photographs slipped inside the front cover) by Bedford Lemere (1839-1911), one of the earliest and arguably most celebrated architectural photographers of the late 19th and early 20th centuries.  Lemere’s album records, in situ, the original collection of casts that formed the Royal Architectural Museum. Its relation to the Cast Courts is explored below.

The Royal Architectural Museum was established in 1851 by a group of architectural professionals led by George Gilbert Scott (1811-1878). It was formed for the purpose of improving the education of architectural art-workers.  The Royal Architectural Museum collections were made up primarily of plaster casts of European Gothic architectural ornament, together with original examples of decorative ironwork, tiles, woodcarving, sculptural stonework, stained glass and architectural models, plans and drawings. The Museum’s first home was in Canon Row, London. Under the patronage of Prince Albert (1819-1861) the Museum expanded rapidly and in 1857 moved to the new South Kensington Museum where it retained its independent status and name. In 1869 it moved to Tufton Street, London.

Sometime around 1872, Bedford Lemere was granted permission to photograph the Royal Architectural Museum collection.  The V&A Bedford Lemere album dates from that year.  It records objects in the Royal Architectural Museum’s Tufton Street galleried location, and also documents and expresses the Victorian zeal for reproduction. The photographs are mostly of casts from cathedrals at Chartres, Rouen, Amiens, St. Albans, Wells, Hereford, Ely, Lincoln and Westminster Abbey. The casts include capitals, bosses, finials, brackets, rosettes, spandrels, etc. Many of the photographs are enhanced by signs wired onto the wall stating the source of the cast and name of the photographer Bedford Lemere & Co.  Catalogue numbers scratched into the negatives are also occasionally visible.

This album includes a printed title page headlined ‘Professional List’ and is dated November 1872. It describes the collection as the ‘first series of thirty’ 10 x 12 inch photographs from an inventory of about 200 views of the Royal Architectural Museum collection, sold as sets (either loose or bound) or as single photographs. It was marketed to professionals, students and ‘Art-workers’ (in fact the album contains over 60 photographs, probably the merging of two sets). A hand-written inscription on the bottom of this page states that the album was delivered to the V&A by ‘Sir G. Gilbert Scott’, Royal Architectural Museum founder.

When the album was first found, there was no evidence of any museum numbers or library markings, which leads us to think it was originally a reference resource kept by the Sculpture section and not catalogued as part of the Photographs collection. It was likely acquired in 1872 as a sample from Scott and was kept in the department by the Sculpture curators, used as a reference guide to Gothic architectural details, a catalogue for orders, and later as reference material for the V&A Cast collection.  While the photographs themselves are in relatively good shape owing to the fact that the album protects them from the destructive action of light, the covers of the album have seen better days, probably due to its original use as a frequently consulted resource.

The inscription from Scott and comparisons with later albums found in other collections hints that this is an early version of what was later widely distributed to schools and artisans. The content and order of photographs closely corresponds to a 1875 version of the album titled ‘Photographs taken from Specimens in Royal Architectural Museum, Westminster, Album No. 1′, part of the British Architectural Library collection.  That volume of 62 prints includes a printed endorsement by the Science and Art Department, (the administrator of the South Kensington Museum), pledging to provide aid towards its purchase to ‘any School of Art’.  This suggests that the V&A album might also have been presented as a sample in order to procure an official endorsement from the Science and Art Department, a ‘stamp of approval’ from the British government body charged with promoting education in art, science and technology.

The South Kensington Museum did make two purchases of loose prints from this series: two sets of 30 unmounted photographs on 18 January 1873 and two sets of 90 unmounted photographs on 10 June 1875.  These photographs were assigned museum numbers and would have originally been housed in the National Art Library as part of the V&A Photographs collection.   Not all of these loose photographs are duplicates of those in the V&A album, they include additional Royal Architectural Museum views which were likely published after the initial 60 mounted in the 1872 album.  Further research needs to be done in order to determine how many of the 200 views were eventually published.

Citing the fact that the collection is ‘insufficiently housed and inadequately shown at 18 Tufton Street’, Hall sought to transfer the collection to a ‘more accessible situation, and one better known to those of the general public who are interested in architecture.’ By 1916, much of the collection was transferred to the V&A and now forms part of the reconstituted Cast Courts.

The Victorian demand for reproductions is being reassessed and viewed in a new context.  The current exhibition A World of Fragile Parts, at the Venice Biennale, looks at the history of reproductions  and considers how copies, including casts and photographs, can aid in the preservation of global cultural artefacts under threat.   Photographs such as these of collections of copies are also a note-worthy phenomenon in that they are two steps removed from the original, documenting a copy of an original and recording the new context within which the copies are displayed. They foreground questions concerning the authority of the original, its relationship to the copy and the designation of meanings when new contexts are assigned.