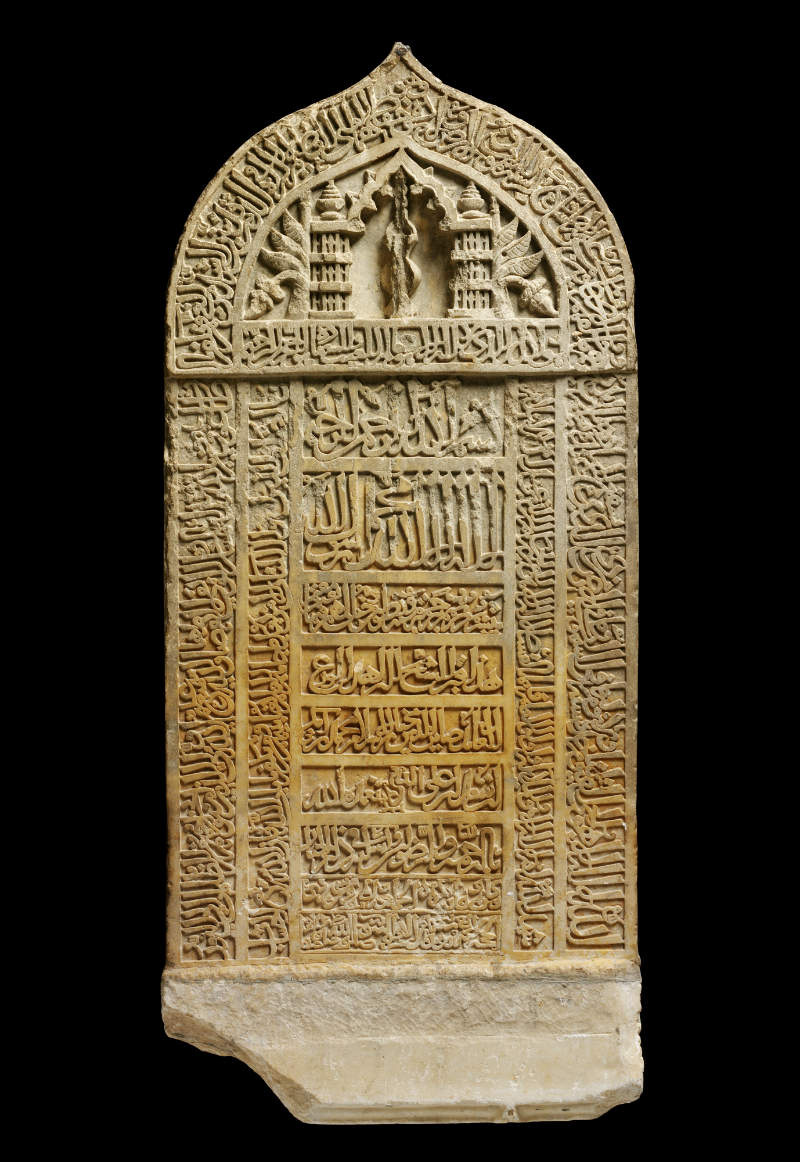 A while ago, I was asked to assess the condition of three 14th century gravestones, which have since travelled to a newly built National Museum of Oman in Muscat. The gravestones are beautiful in themselves, but they also tell a very interesting story about trade in the Indian Ocean. They were carved at Khambhat in Gujarat from marble that was quarried from the Khatiawar peninsula to the west, but the marble was not necessarily new – there are clear signs on many examples that the stone had already been used once in buildings in the city. Gravestones of this type made from recycled marble were a regular export from Khambhat, and examples have been found from East Africa in the west to Indonesia in the east. In this case they were exported to the city of Zufar in southern Arabia, which was then controlled by the Rasulid dynasty of Yemen. Zufar itself has disappeared, but it gave its name to the surrounding province of Dhofar, which is now the westernmost part of the Sultanate of Oman. The gravestones must have been a relatively expensive commodity, and it is no surprise to find that the two people they commemorate are a Rasulid governor of Zufar, who was a prince of this dynasty, and a leading religious figure in the city, Shaykh Muhammad. The gravestones arrived already decorated with a dense composition of finely calligraphed Koranic inscriptions and characteristic decorative motifs, but spaces were left for the names of the deceased, which were added locally.

Before the loan could be approved, the overall condition of each gravestone was checked, to ensure they were safe for their long journey and display. What concerned me was their structural stability and the extent of conservation treatment they required prior to travel. Other things to consider were details of their display and travel requirements. This involved discussions between V&A registrars, exhibition designers from the Museum in Oman, curators, mount makers and packers.

I began by searching the object files in our studio to see whether I could find previous conservation treatment records. I found a file for the headstone of the tomb of Wathiq Nur al-Din Ibrahim (Museum no. A.12-1933). This was cleaned in 2003, when it was being prepared as a possible choice for a temporary exhibition at the V&A. The records showed that it was cleaned with purified water and cotton wool swabs and a water based poultice. There was no note indicating a problem with its structure, which was reassuring.

My next step was to go and see the objects in the Museum’s so called ‘deep store’ together with Sau Fong Chan, Curator from the Asian Department. The store was like Tutankhamen’s tomb, crammed with amazing treasures waiting to be re-discovered. We found the stones laid flat on pallets high up on the top shelves of an enormous metal racking, and our way was obstructed by a stack of beautiful North African decorative panels. To gain access to the gravestones to assess them fully seemed tricky, but the museum’s technical staff were able to manoeuvre the heavy stones to the floor with a forklift truck. We unwrapped them from their polythene sheeting and had a good look at their overall condition.

Each stone has a rectangular outline with an ogee shaped top. The two stones from the grave of Nur al-Din Ibrahim have carvings on every face, while Shaykh Mohammad’s gravestone (museum number A.5-1932) is plain on the back. The base of Shaykh Mohammad’s gravestone has a carved detail at the base that indicates that the stone may have indeed made from reused building stone.

The stones all appeared to be structurally sound – we found no cracks that would have weakened them. The surfaces were eroded and slightly chipped in some areas, but the marble was stable and did not seem to require consolidation. The carving and lettering was still readable and in reasonable condition, considering the stones had probably spent centuries outdoors in Oman’s desert climate. We took measurements and photographs and made arrangements for them to be delivered to the conservation studio.

Once the stones were in the sculpture conservation studio, I invited Sau Fong Chan and Senior Curator Tim Stanley to discuss how far I should go with cleaning the stones. The pair of gravestones for Nur al-Din Ibrahim looked slightly different from each other. As previously noted, one had been cleaned in 2003, but this was not enough to explain the variance in appearance. One factor may have been that they had different individual histories while in the cemetery in Dhofar – one may have fallen and been buried, while the other survived above ground, for example. Or, as I discovered later, perhaps the stones were made from different types of marble because they were originally made for two separate graves. This might explain the tiny minute specs of iron encrustations on the surface of the headstone, which didn’t appear on the foot stone.

The stones had lost most of their original polished surface although some of it remained on the carved highlights on areas in the middle and on the flat band around the edges. The upper parts of the stones appeared to be weathered more that the lower parts. The uneven bases of the stones were paler and better preserved, probably due to burial or being inserted into a tomb structure.

All three gravestones had traces of a reddish material on parts of their surface and it was impossible to tell whether this was pigment. I looked at the surfaces under UV light, to see if any of the surface fluoresced, but the results were inconclusive. I decided to have the red analysed to clarify whether it was part of the original decoration or a later addition.

Dr Lucia Burgio analysed two samples from the footstone of the tomb of Nur al-Din Ibrahim using XRF spectrometry, a technique which uses X-rays to identify the chemical elements in our objects.

The XRF detected only calcium and small amounts of iron, suggesting that either a red iron oxide or an organic red colourant was present.

To confirm what the red substance was, I asked Dr Brenda Keneghan, our Senior Polymer Scientist, to analyse further samples and she confirmed that the material had been created naturally. Brenda explained that calcium carbonate can be naturally converted to calcium oxalate by lichen and that the FTIR spectrum for calcium oxalate is very similar to sodium oxalate, which often shows as red staining on marble surfaces. I examined the footstone with a magnification and surprisingly found small specs of lichen on the top part of the stone, hidden in the crevices of the carved detail. I suppose the lichen explained the oxalate formation and the red colour, which was worthwhile evidence of this natural phenomenon.

Regarding the cleaning the objects, I kept this to a minimum, removing only the surface dust with different types of soft brushes and vacuum suction. Further cleaning on areas with more stubborn dirt was done with solvents and specialist sponges dampened in purified water, which picked up unwanted grime satisfactorily. To get into corners and incisions, I used small cotton wool swabs.

Preparing the mounts for the stones

We needed to decide how the stones would be supported if they were to stand upright in the National Museum of Oman. They were heavy pieces, over 100 kilos each and had uneven bases and each needed a minimum of three people to lift and turn them around.
The exhibition designers in the Museum of Oman wanted high resolution images of the gravestones to help them decide how to display them and we arranged for the stones to be photographed by the Museum’s Photography Department. After we sent the images to Oman, they sent us a back a display proposal which allowed us to advise on how the gravestones should be mounted and supported. The mounts were then designed and trialled by the V&A mount makers. This was done by lifting each stone using a gantry onto their specially constructed support structures. The stones were then packed into wooden crates and travelled by plane to the Sultanate of Oman with Tim Stanley, who oversaw their installation.

The opportunity to work and study these three amazing gravestones has been a truly fascinating experience and I am thrilled that they are out on display in Muscat so they can be admired and enjoyed by the visitors of the National Museum of Oman.

I would like to extend my sincerest thanks to Senior Curator of the Middle Eastern Department Tim Stanley and Senior Scientist Dr. Lucia Burgio who contributed to this blog.