Of the 750 copies of Shakespeare’s First Folio – the first collected edition of the Bard’s plays – printed in 1623, 232 are known to survive. There are probably others waiting to be found, perhaps lying forgotten in dusty attics or locked away in the private libraries of reclusive billionaire bibliophiles! 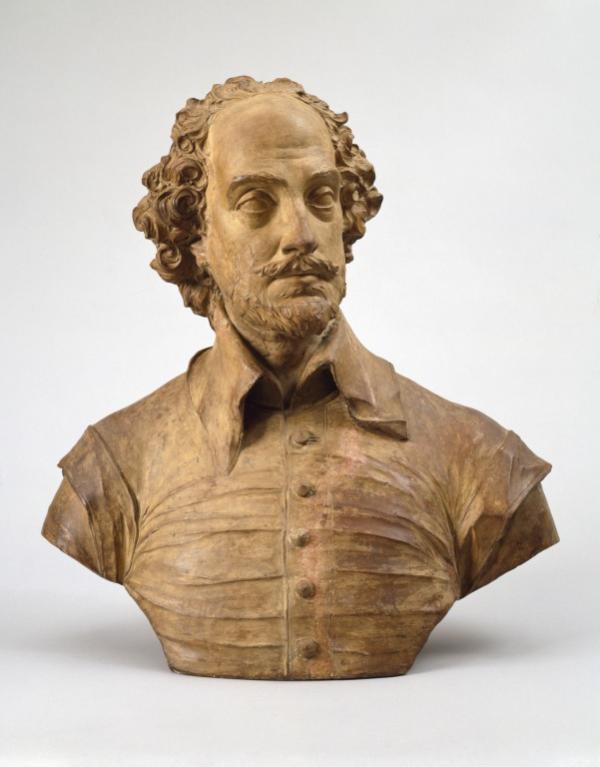 Bust, terracotta, of Shakespeare, by John Michael Rysbrack, England, ca. 1730. Presented by Mrs M. A. Miller, in memory of her father, Augustus William Roxon. Museum no. A.6-1924. © Victoria and Albert Museum, London

The Folger Shakespeare Library in Washington, D.C., holds the world’s largest collection of First Folios (82); Meisei University in Tokyo follows a distant second with a nonetheless impressive 12 copies. You may be surprised to learn that the V&A owns a respectable trove of 3 First Folios: in the UK, only the British Library holds more copies (4), while the V&A ranks 6th= on the international league table of First Folio owners. 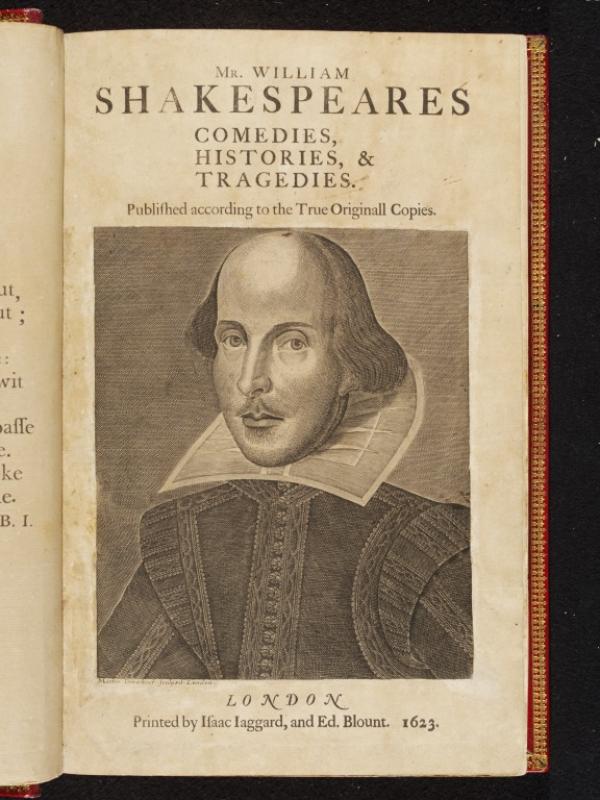 The V&A also holds 4 Second Folios (1632) and 1 Third Folio (1664); the V&A’s copy of the Third Folio is particularly special as the poets William Wordsworth and Robert Browning, and novelist Charles Dickens, have signed their names on the title page. 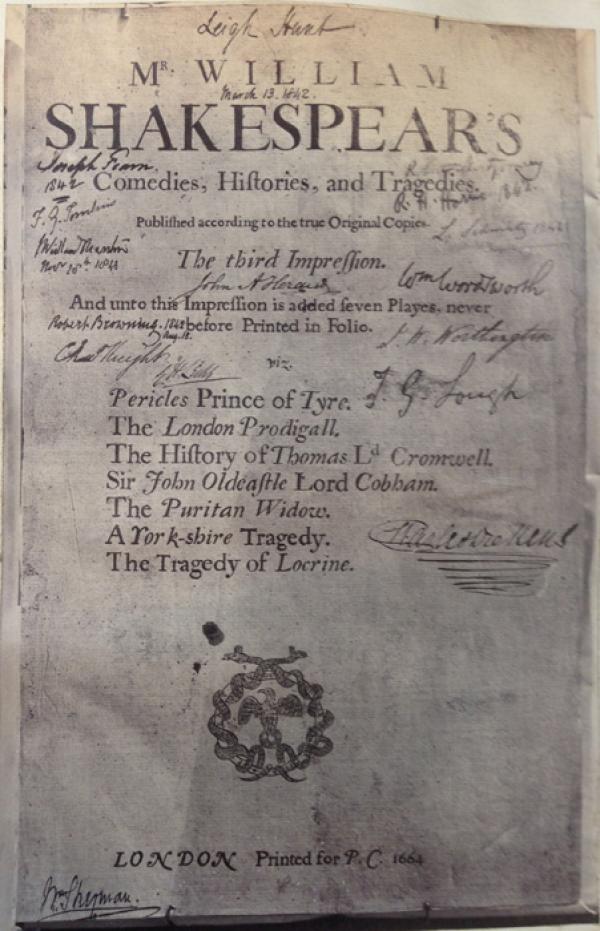 Compiled 7 years after Shakespeare’s death by two of his fellow King’s Men players, John Heminges and Henry Condell, the First Folio, entitled ‘Mr. William Shakespeares Comedies, Histories, & Tragedies’, contained 36 plays. Significantly, it added to the canon 18 plays that would otherwise be lost; these included As You Like It, Antony and Cleopatra, The Comedy of Errors, Macbeth, Julius Caesar, Twelfth Night, and The Tempest. Without the First Folio, then, we would be deprived of such memorable lines as ‘Friends, Romans, countrymen, lend me your ears’ (Julius Caesar) and ‘Is this a Dagger, which I see before me!’ (Macbeth). 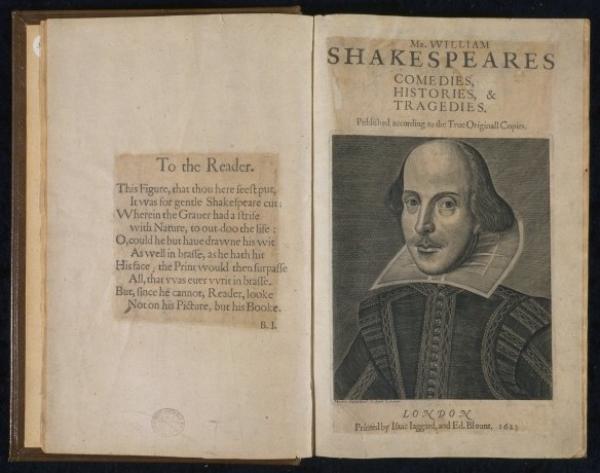 In their ‘Epistle To The Great Variety of Readers’, Heminges and Condell asserted that their Folio edition of Shakespeare’s plays offered greater textual and dramaturgical authenticity over earlier publications – which they condemned as the products of ‘stol’n and surreptitious copies, maimed and deformed by frauds and stealths of injurious impostors’ – since the plays ‘are now offer’d to your view cured, and perfect of their limbes; and all the rest, absolute in their numbers as he conceived them’. 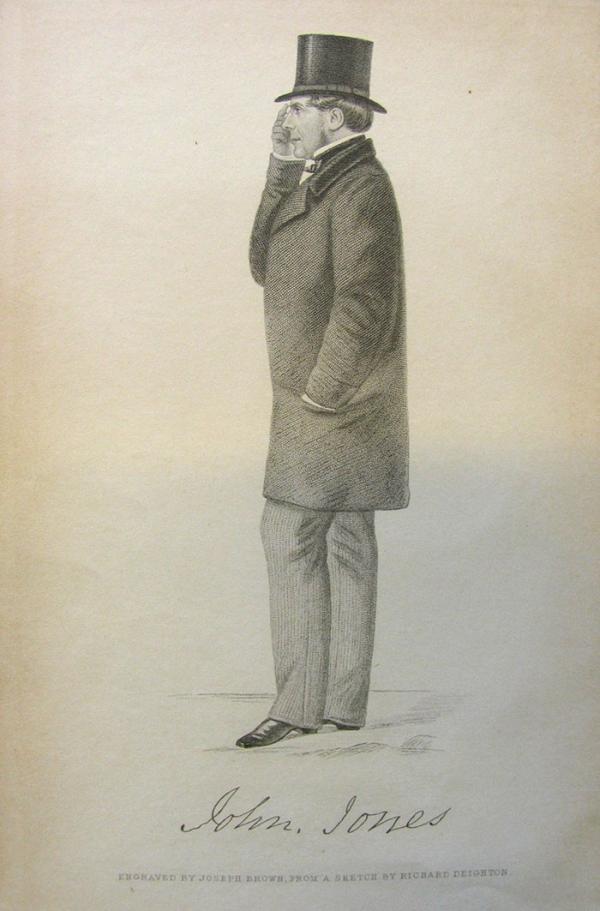 John Jones (1798–1882), engraving by Joseph Brown, from a sketch by Richard Deighton, reproduced in Handbook of the Jones Collection in the South Kensington Museum (1883). © Victoria and Albert Museum, London 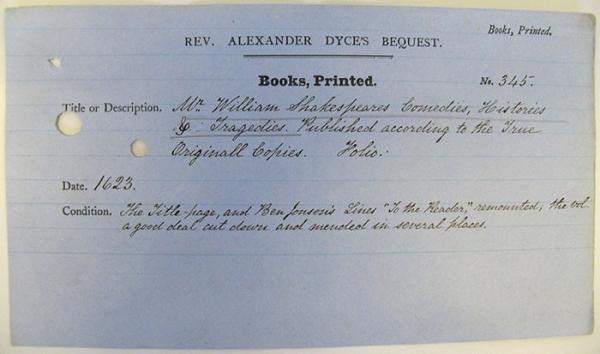 The author of the Handbook of the Jones Collection (1883) explained why the V&A needed a third copy of the First Folio:

“It is a somewhat singular circumstance that the South Kensington Museum can boast two copies of both the first and second editions of the collected plays of Shakespeare. There are copies in the Dyce library, bequeathed to the Museum in 1869; these are a trifle taller, a small fraction of an inch, than Mr. Jones’s copies. Details of this kind may seem to many people unimportant; but in reality they are not so in the case of books so rare, so important, and so much sought after as the early editions of Shakespeare.” (1) 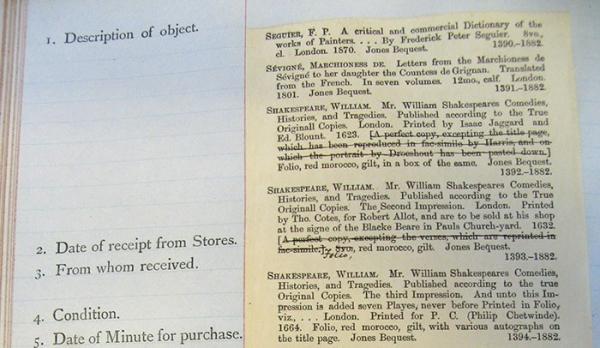 In 1916 all three First Folios were showcased in the V&A’s Shakespeare Tercentenary Exhibition. 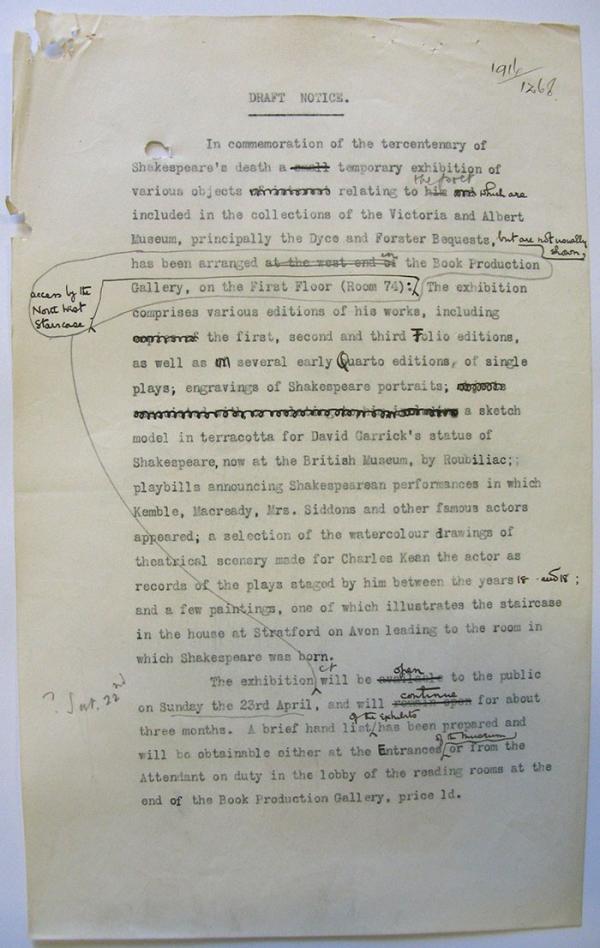 The exhibition was reviewed in the Times newspaper, which remarked that ‘While the British Museum could make a more elaborate display of rarities, printed and in manuscript, it may be doubted that it could form one which would appeal so strongly to the general public’ (2). Of the 3 First Folios on display, the Daily Telegraph trilled, ‘They are volumes to look upon with the reverence that a good pilgrim manifests before some sacred shrine…’. (3)

Should you wish to make a pilgrimage to venerate the First Folio, the Jones copy is on display in the Treasures of the Royal Courts: Tudors, Stuarts and the Russian Tsars exhibition, 9 March 2013 – 14 July 2013.

1. Handbook of the Jones Collection in the South Kensington Museum (1883)

Can the First Folios in the V&A be viewed by visitors to London?