Today I ‘d like to share with you something old from the collection, which rarely gets a chance to claim the limelight – brass rubbings.

In the interest of honesty, I will admit that when I started to catalogue all of the brass rubbings the Museum acquired in 1934, the subject did not thrill me. However, I have now learned to love them, as I’ve realised that they are fascinating from both an aesthetic and a historical point of view. The popularity of the brass rubbings we hold has varied greatly – in the 1970’s they were one of the most requested objects in the Prints and Drawings Study Room, but in recent times visitors have shown less interest, though the current widespread enthusiasm for researching one’s family tree may mean that these objects may enter the limelight again, perhaps?

For those unsure of what I am talking about, a brass rubbing is exactly what it sounds like – indeed some of you may have been taken to local churches to make your own as children. They are made by laying a thin sheet of paper over an incised slab such as a brass plate on a tomb, and rubbing over the whole surface with a wax crayon, whilst being careful to keep the sheet still. The wax crayon covers the surface of the paper, leaving an outline of the incised lines of the plate underneath. The hobby was extremely popular in the eighteenth and nineteenth centuries and the V&A acquired a great number of examples in the 1920’s and 30’s.

Let us start by looking at this lone knight in Hurstmonceaux Church, Sussex. His name is Sir William Finelez (d. 1402). We know he is a knight because he is depicted wearing armour, and he has a heraldic animal at his feet (consensus in the Factory is that it’s a lion, but we are open to other suggestions). The brass design is elaborate and traditional, consisting of an effigy, a canopy and French inscription. Research tells us that he knew the King, and, given the date on which he died, it is entirely possible that he was killed during the Glyndŵr Rising whilst fighting for the King, although we don’t know for sure. 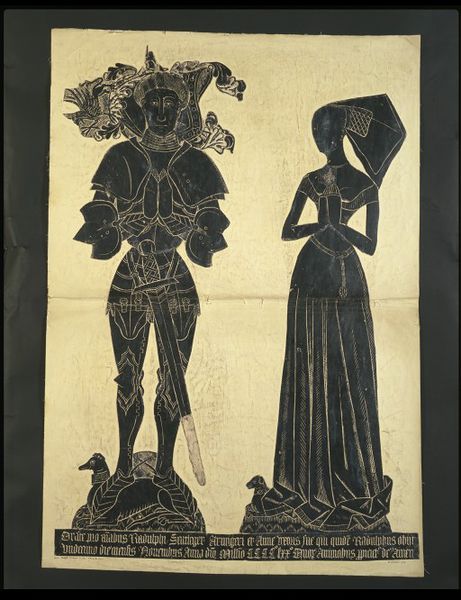 Brass rubbings are one of the major sources of evidence in early costume trends. The hobby was so popular in the eighteenth and nineteenth centuries that many of the original brasses have worn away, making the rubbings even more important. Take Ralph St. Leger and his very fashionable wife. She is wearing a butterfly headress, a brief trend from the late 1400’s. Hair was dragged back from the forehead, and a large framework of wire was attached.  A light gauze veil then covered this framework, creating a most attractive effect. On a side note, instead of a heraldic animal at their feet, this couple each have a favourite dog. 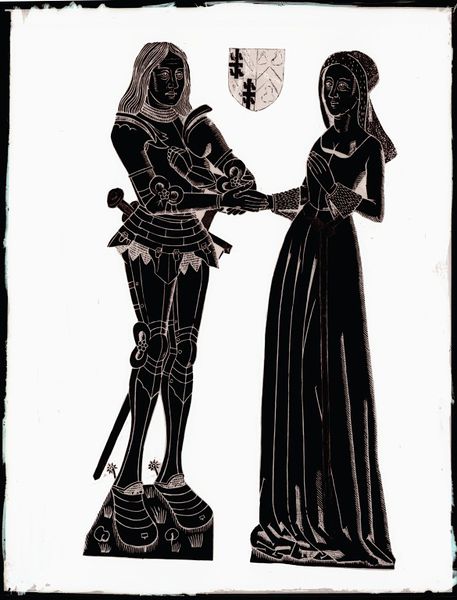 Finally, something for the romantic souls among us. This unusual rubbing, from Nether Heyford Church, Northamptonshire, is of Sir Walter Mauntell (d. 1487), High Sheriff of Northamptonshire, with his wife Elizabeth. Instead of the traditional hands clasped in prayer we see in the previous rubbings, Sir Walter tenderly holds his wife’s right hand. In addition, they are both depicted in slight profile, looking at each other. The design harks to the subject of Phillip Larkin’s famous poem ‘An Arundel Tomb,’ particularly to the last line, ‘What will survive of us is love.’

Hi Brittany How do I search find catalogue of brass rubbings and does your catalogue cover Suffolk and Norfolk? Have thy been digitised to view online?

I live in Houston Texas USA and have a copy of your book dated 1968….is is totally fascinating for me. Not sure where I obtained it, but I think it was in the delopatated garage of a house I rented during college located in North Louisiana. I have spent hours looking through it and would love to be by your side during the research process. I was excited to find a listing for Blackwell family crest but there was no image for this design. I have done research on and off trying to find it. Today I found you..woow, can’t believe it. …..very exciting.

First I would like to congratulate you on an astonishing documentation effort. I was hoping that you might have this crest design on file or can direct me on where I can find it. Would very much like to purchase this Blackwell family crest. There are some on the internet but do not trust the source.