The John Madejski Garden is an oasis in the centre of the Museum and now that Spring is here again we’ll be able to step out of the galleries and enjoy the courtyard garden to the full. 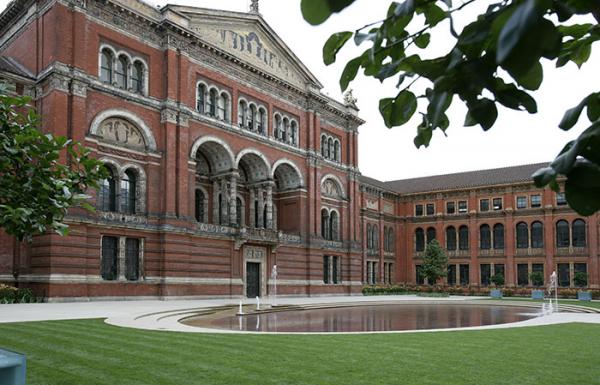 The Quadrangle (as the Garden space was originally known) has always played an important part in the design and layout of the Museum, and the V&A Archive holds numerous photographs documenting its evolution over the years. Did you know that the impressive pedimented Lecture Theatre building with its bronze doors was originally designed to be the main entrance to the Museum when it was built in 1865? In fact the Quadrangle garden was not enclosed on four sides until the building housing the National Art Library was erected on the south side in 1884, thereby forming the courtyard garden as we see it today. Until then earlier buildings stood in the space, such as the Museum’s first Lecture Theatre, which were later demolished. 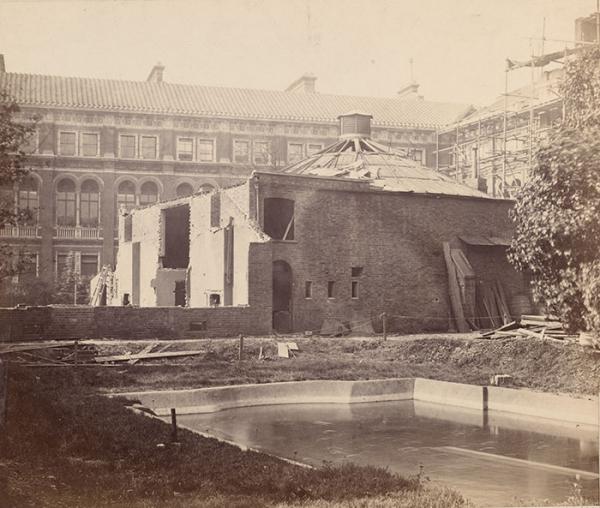 The South Kensington Museum’s first lecture theatre in the Garden in 1865, shortly before its demolition. Two sides of the current buildings that surround the Garden can be seen in the background. V&A Archive, MA/32/17 Guardbook, negative 4142. © Victoria and Albert Museum, London

In the foreground of another view below (and seen in the photograph above) is the large pool that was set up in 1861 for Prince Albert to experiment with the design of the model of the 1851 Exhibition memorial. The completed memorial stands between the Royal Albert Hall and Prince Consort Road. The building in the background is the Sheepshanks Gallery built in the late 1850s; it still exists today but with its façade rebuilt in 1901 in the same early Renaissance Italianate-style – the ‘South Kensington Style’ as it became known – as the other sides of the Quadrangle. 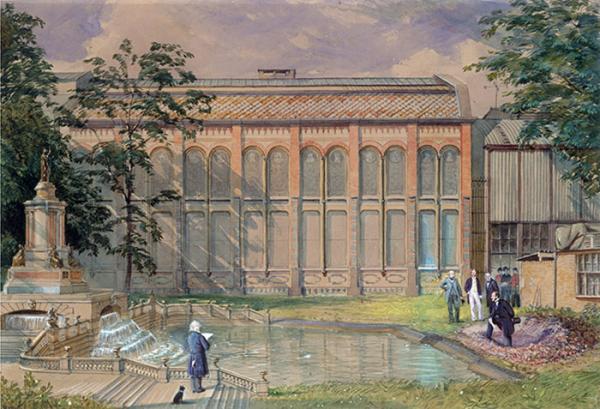 Prince Albert and the Museum’s first Director Henry Cole inspecting the model of the 1851 Exhibition Memorial erected in the Garden in 1861, showing the pool and fountain with the Sheepshanks Gallery in the background. Watercolour drawing by Anthony Stannus. Object number 7851. © Victoria and Albert Museum, London

The pool was put to other uses and here are some soldiers (nicknamed ‘Sappers’) from the Royal Engineers Regiment testing part of a pontoon in the pool in 1861. The ‘Sappers’ provided technical support at the Museum until the late 1890s as well being its security staff, firemen and photographers. 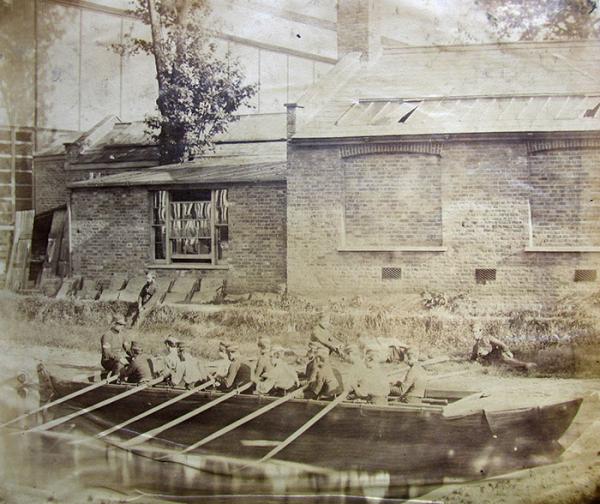 ‘Sappers’ from the Royal Engineers Regiment testing part of a pontoon in the pool in 1861. V&A Archive, MA/32/11 Guardbook, negative 2325. © Victoria and Albert Museum, London

The Garden is always a good setting for staff photographs and here’s one showing the workmen, labourers, and Chief Warder who were selected to be received by King Edward VII during the opening of the new Museum buildings in June 1909. 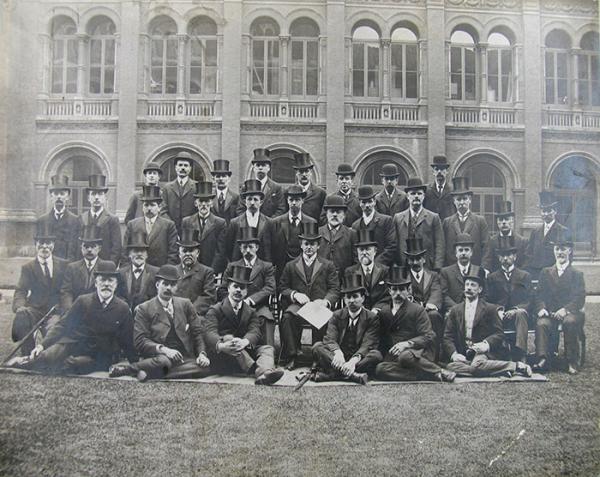 For many years the Garden was set out with ‘civic’ planting and with much-loved cherry trees. Here it is in 1950 with one of the many outside concerts in full swing. 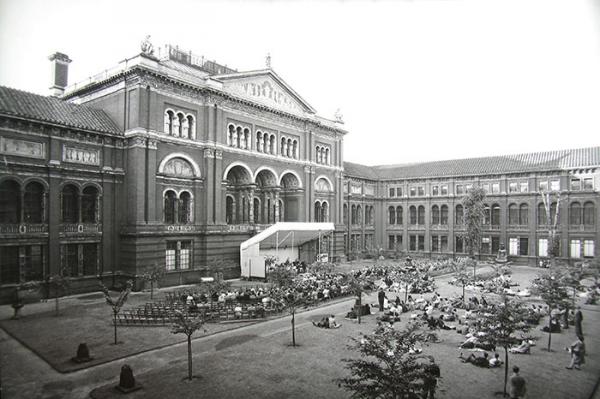 Director Sir Roy Strong brought about the biggest change to the Garden’s layout when it was replanted in the 1980s with cedar and alder trees to create a sympathetic ‘Tuscan’ atmosphere to the Italianate courtyard buildings.

The John Madejski Garden is the latest incarnation of the Quadrangle space, but it is just a fragment of the original gardens that stretched down to Cromwell Road. An early bird’s-eye view of the Museum from 1862 shows how the buildings fitted into the gardens. The first Lecture Theatre and the pool are in the centre of the drawing, with the Museum’s early cast iron galleries, nicknamed the ‘Brompton Boilers’, on the right-hand side. 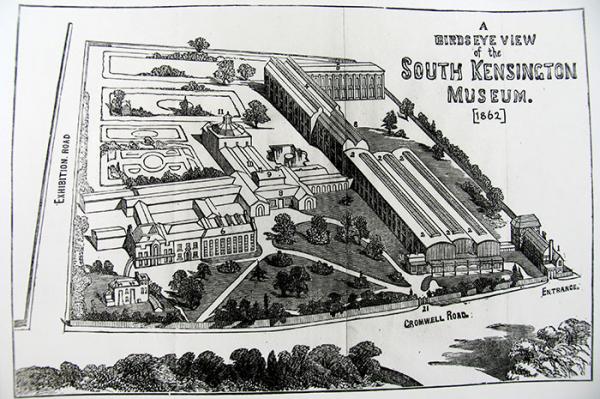 Here follows an image of the Museum’s gardens taken in 1891. These gardens disappeared during the extensive additions to the buildings along the Cromwell Road designed by Sir Aston Webb and completed by 1909. 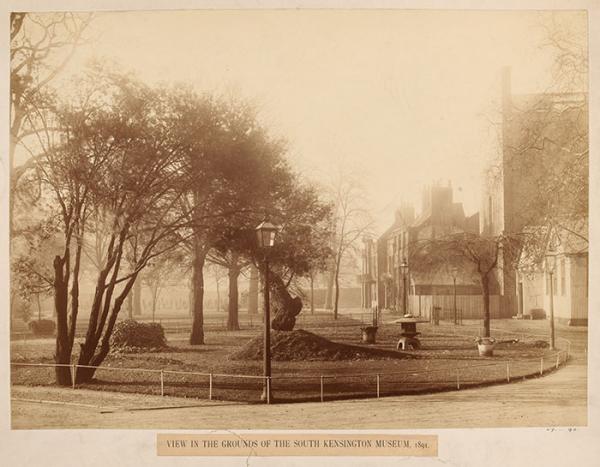 The South Kensington Museum’s gardens in 1891 looking west towards Exhibition Road with Brompton Park House on the right-hand side. This view is taken from roughly where the Museum shop now stands. Object number PH.67-1892. © Victoria and Albert Museum, London

Finally, here’s a barely recognisable early view of the Museum and its gardens covered in snow. Let’s hope we’ve seen the last of the snow this year! 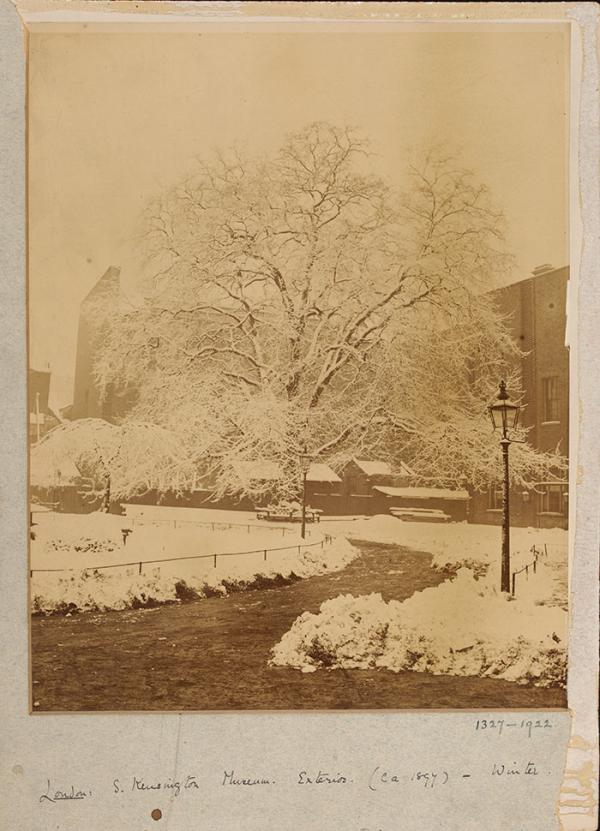 The South Kensington Museum’s gardens around 1897 with the southern side of the National Art Library range on the right; the Aston Webb buildings built down to Cromwell Road now join this building. This view is taken from roughly where the Samsung Gallery now stands. Object number 1327-1922. © Victoria and Albert Museum, London

Keep taking photos and in 10 or so years make another comparison. It did change throughout the years but it was always beautiful as I can see. Great photo material!

‘Sapper’ is much more than a nickname for a soldier in the R.E., it is a long-standing official name. One of the constituent parts of the current Corps of Royal Engineers (formed in 1856) was the ‘Corps of Royal Sappers and Miners’, and since that date the official title for the basic, bottom-rung-of-the-ladder soldier in the Corps has been ‘Sapper’ – they are never referred to as a ‘Private’.

What a lovely garden and pond!