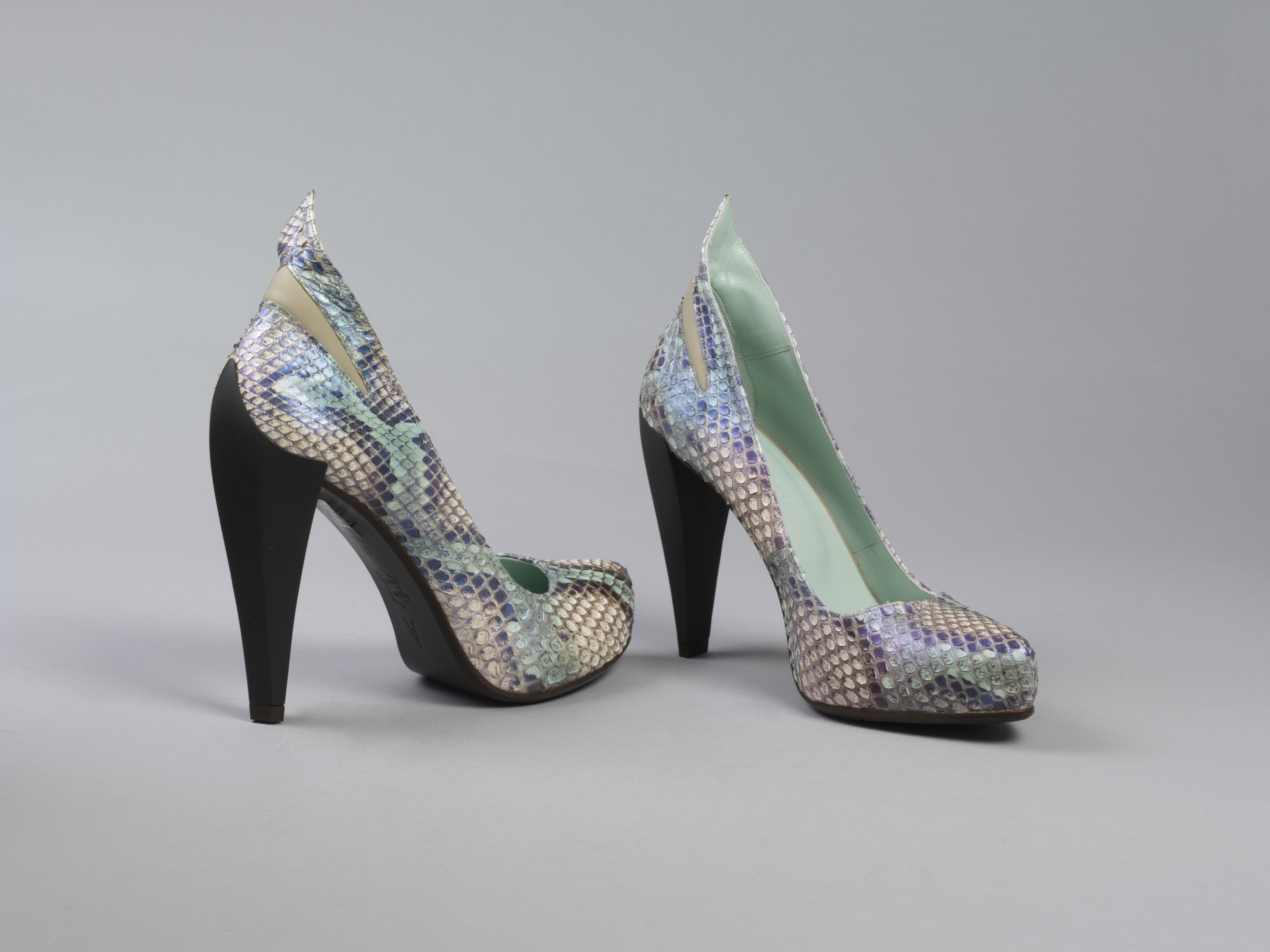 It started so innocently, with a new shoe acquisition arriving in store and needing a home, and my simple question, “is there a specific cupboard for the 21st century shoes?”

You see, the Clothworkers’ Centre for the Study and Conservation of Textiles and Fashion has a dedicated shoe storage room, with 32 cupboards containing over 2500 individual shoes, dating from the mid 1600s to the present day. The shoes are arranged chronologically, and there is really nothing quite as satisfying as opening a cupboard to find an array of 18th century shoes:

But, alas, the 20th and 21st century shoes were not quite so organised. There was a vague split between 1900-1960 and 1970-onward, but particularly post ’70s they became a bit of a mishmash of eras. I don’t know about you, but nothing sets my eye twitching like a pair of 2010 python heels sandwiched between some ’70s ankle boots and ’90s Blahnik’s! Something had to be done.

That something started with the separation and relocation of a collection of shoes we call Streetstyle. These were acquired in the 1990s as part of the Streetstyle exhibition, which showcased real ensembles donated by people from a myriad of different popular subcultures. The 82 pairs of shoes in the collection that came in through this exhibition have proved an interesting challenge – unlike most of our contemporary shoes they have been worn, customised, and in one instance repaired with electrical tape. They are also more likely to be made of degradable materials like plastic or flaking from a home-paint job. On top of this, they were added to the cupboards after the rest of the shoes had moved in, so they were fitted in wherever there was space – in the process removing the spaces reserved for the Shoes: Pleasure and Pain exhibition which is currently on tour.

The plan was to move the Streetstyle shoes into the three empty cupboards in the next room. Easy?! Nope. It turned out those cupboards had no locks, or shelves. I should have known they were empty for a reason. One request to the locksmith, one plea to technical services, and three attempts finding, moving and fitting shelves myself later, and I was ready to rehome those shoes. (Easy-peasy, except for when it’s not immediately clear from the shoe record whether S/S stands for StreetStyle or Spring/Summer, which did lead to a couple of pairs being moved out of their homes and then back again. Whoops.)

Stage one complete, it was now time to reinstate chronology into the 20th and 21st century shoes. Armed with pages and pages of shoe records organised by date and with the current location listed, I dove into the cupboard I had designated post-2010, and got to work.

This was mostly a straightforward task that raised some questions I never thought I’d ask myself: Should the men’s shoes be kept with the women’s when there are only 6 pairs? Yes, if only because there’s a pair that could belong in either. Should boots stay in the mixed-decade boots cupboard or be reassigned to their era? Stay in the boots cupboard, apart from when I forget. Do the 1990s really need 2 cupboards or can I squeeze them into 1? They fit in 1… for now!

I’m pleased to say that 5 months after asking my innocent, naive question, we now have at least one dedicated cupboard for each decade from 1960 to the present day. New acquisitions will be a breeze to home! Next to tackle – 1900-1950. I’ll keep you posted.

If you would like to make an appointment to study shoes – or anything else from the V&A Textiles and Fashion collection – please email us on clothworkers@vam.ac.uk

See the fashion collection at the V&A

It is really impressive the work you have done to arrange this exhibition. People can get a glimpse into the evolution of shoes. I would love to see this wonderful exhibition. Looking forward to see more amazing collections in the future.

You have done great work, nice to read this interesting post, i want to say thanks for sharing this post.

I like the helpful info you provide in your articles.I’ll bookmark your blog and check again here frequently.I am quite sure I’ll learn a lot of new stuff right here! Good luck for the next!

It is really impressive the work you have done to arrange this exhibition. People can get a glimpse into the evolution of shoes.